« Rounding up the Honey Bees (2) | Main | Replay : A Close Encounter of the Enological Kind »

It can be both fun and instructive to play with numbers that give us some sense of the microbial world. Consider, if you will, some of the following examples…

The mass of an fast growing E. coli cell is estimated to be about 10–12 gram (a picogram). That's almost 10–17 × the weight of a human (a small fraction indeed!). So, yes, bacteria are extreme light­weights. But there's power in numbers…

Some estimates suggest that there are some 1012 microbial species on Earth. I hesitate to call 1012 a trillion because for many humans on Earth 1012 is a billion. If you are interested in the history of the long and short scales for naming large numbers and why it is that we still don't have universal names for numbers past a million, see here. 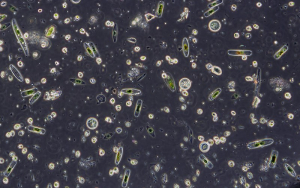 Speaking of Andromeda, it is 2.5 × 106 light years from Earth. With one light year being 1016 meters, Andromeda is a mind-boggling 2.5 × 1022 meters away. Even with their minute length of some 10–6 meters, lining up all of the mi­crobial cells of Earth, estimated at 1030, their 1024 meters would stretch out 108 light years, going way way past Andromeda, reaching past the edge of our galaxy neighborhood, the Virgo Supercluster. Quite mind-boggling indeed!

Let's bring it back down to Earth though, to the much discussed bacterial cells to human cells ratio typical of a human body. Latest estimates indicate that there is about an equal number of each, some 3–4 × 1013 bacterial cells (mostly in the colon) and about 3 × 1013 human cells (mostly enuc­le­ated red blood cells). Which brings up two interesting points in terms of cell numbers and hu­man bodies. First, most of our human cells lack human chromosomes. Second, after each bowel move­ment we all become more human but also less super organism.

Fun as these numbers may be, they should be "taken with a grain of salt." That's a clear number: one grain of salt. Apparently, an ancient recipe for a poison antidote included one grain of salt, giving rise to the widely used phrase. In contrast to all of the foregoing number estimates, we can state with certainty that there is one planet where we know beyond the shadow of a doubt that there is life, life magnificently diverse. And, as far as I know, each one of us humans has one life to live here. The date of this post is the 4th Thursday of the 11th month, a day celebrated in the USA as a day of Thanksgiving. It reminds me to thankful for this one life. "Gracias a la vida!"