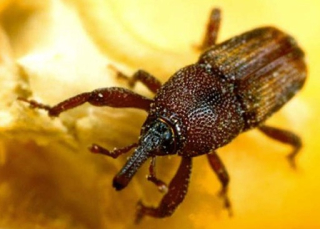 Obvious in the establishment and progress in bac­terial pathogenesis is that the inoculum, the number of bac­te­ria entering their host at one time, must be of an effect­ive size. Depending on the infectivity of the species, this can vary from a single bacterium to millions of them. However, this is only the beginning of the story because, once in the body of their host, the bacteria face serious challenge to their survival and ability to multiply. All im­portant are assets of the invading bacteria ‒ the viru­lence factors they produce ‒ and in what amounts. The expression of their genes, ergo the amounts made, can be modulated in various ways. Quorum sensing, the bac­teria's ability to measure their population size, is one such device. Via quorum sensing, the bacte­ria determine whether it's worthwhile to turn on energetically expensive virulence genes. The rea­son is that if the size of the population is low, making such factors in large amounts would activate host defenses before the invaders reach a threshold needed to survive by responding to them. Stealth is imperative, premature signaling their presence to the host, a grave mistake.

In fact, most bacterial virulence factors are under quorum sensing control, which makes its com­po­nents tempting targets for new antibiotics. This is an active area of research and development. 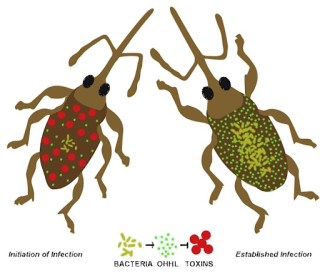 Now for the converse. Are there bacteria that use quo­rum sensing to reduce the level of their virulence factors? Sure enough, if their role in nature is to establish sym­bi­o­tic relationships, these bacteria may well use such a stra­tegy. But why would they have virulence factors at all, being that they strive for peaceful coexistence with their host? The answer is that both pathogens and symbionts share the first steps in colonization, that is, entering the host and surviving the defense mechanisms present at the time. Thus, even though the two may eventually di­verge and travel along different paths, early on they share the need to make certain virulence factors in small amounts. But in the case of the symbionts, large amounts of such factors would get in the way of subsequent har­mo­ny (perhaps here they should not be called virulence factors: "colonization factors" may be a more apt term).

The case in point is an insect symbiont, the bacterium Sodalis praecaptivus, a member of a genus that is found in a wide range of insects, including grain weevils. Unlike symbionts that are trans­mitted from mother to infant, these must be acquired anew (horizontally) at each generation. Thus, they must be able to colonize their host, using small amounts of virulence factors for this process. The question then becomes, how are these factors later regulated and turned off to pre­vent killing of the host. The answer, reported in a recent paper by Enomoto et al., is quorum sen­sing. But the intent here is backwards. When the threshold size of the population is reached, in­stead of turning virulence factor genes on, here it's the opposite they are turned off. 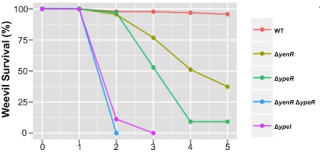 (Click to enlarge) Figure 3. Weevil Survival Fol­lowing Injection of WT and Mutant S. prae­cap­tivus. Inactivation of genes involved in the S. praecaptivus QS system results in weevil killing. Inactivation of both ypeR and yenR in a double-mutant strain yields the most potent killing phenotype. Source

The signaling molecule here is N-(3-oxohexanoyl) ho­mo­serine lactone (OHHL), a familiar one that is used by re­la­ted species including Sodalis glossinidus (the symbiont of the tsetse fly, which reminds me of Ogden Nash's poem, 'Glossina morsitans bit Aunt Betsy. Tsk, tsk, tsetse!'). The au­thors used a neat method to show that OHHL is present also in S. praecaptivus: they overlaid thin layer chroma­to­grams with a reporter strain of Agrobacterium tumefaciens that turns blue in the presence of an N-acyl homoserine lactone. Using transcriptomics, the authors then deter­mined which are the quorum-sensing genes, those tur­n­ed off by OHHL. They found 30 genes that are repressed by quorum sensing, including some thought to be invol­ved in insect pathogenicity such as chitinases. Further, the authors found a complex regulatory interplay between two response regulators, ype and yenR, present in the well-known Lux quorum sensing system of the luminescent marine bacterium, Vi­brio fisheri. Two genes involved in chitinase activity were directly shown to be downregulated by OHHL by in vitro enzyme assays.

Now to the point. The QS phenotype prevents killing of the weevils by S. praecaptivus. To show this, the researchers first got rid of a native symbiont of the weevils and injected them with wild type and QS mutant bacteria. After one week, those who had receievd the Δype strain became le­thargic and died. Not so the weevil who got the wild type strain of the bacteria. Injecting a 1:1 mixture of mutant and wild type suppressed the lethality, ostensibly by providing enough OHHL. This did not happen with Δype, and Δyen strains, which cannot respond to OHHL.

So, what kills the bacteria in the absence of QS? The researchers looked at a number of genes that are differentially expressed in wild type and mutants and zeroed in on pirA and pirB, which appear to constitute a binary toxin system, both being needed for toxic activity. However, toxicity is surely a polygenic trait, and this pair of genes is likely not to be the only one involved.

The paper further discusses the similarities and differences between the establishment of mutua­listic and virulent relationships. It also draws parallels with such chro­nic infections as seen in chronic cystic fibrosis. The authors conclude: "…the QS system in S. praecaptivus acts to enhance the ability of this bacterium to maintain a long-standing infection in an insect host. This mechanism of gene expression control mitigates one side of the double-edged sword of virulence by limiting the harm in­flic­ted upon the host once a successful infection has been established."