Dental Care for Your Pet: For Their Health and Yours 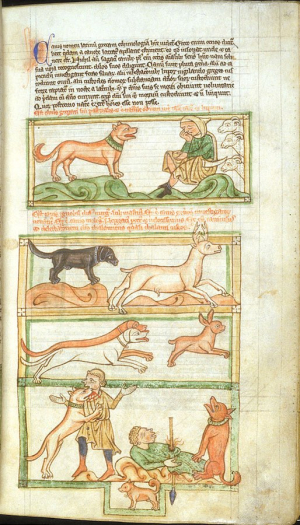 Ever since the domestication of wolves, humans have probably remarked upon the particularly bad breath that our dog companions frequently display. Medieval illuminated bestiaries (Figure 1) speculated that the strong odor from a wolf’s mouth could betray his presence to prey – like a flock of sheep – causing the wolf to its make approach from downwind.

These sorts of observations led to that age-old insult of “dog breath” used to describe a foul case of halitosis in a human. But have you ever wondered why canines’ breaths smell so bad? Most of the time, the culprit is periodontal disease. Periodontal disease is any infection of the gum that can result in oral damage, including tooth decay. Periodontal disease is what we avoid by brushing our teeth, and according to research on this subject in dogs, it might be time to invest in dental care for Fido too.

An opportunistic pathogen of the canine oral cavity

One study of 343 dogs found that 88.67% were suffering from periodontal disease and only 17.46% of these owners made use of some kind of prevention or treatment. With an estimated 50% of Americans having a dog bite during their lifetime, this widespread disease is not only detrimental to your pet’s health, but potentially yours as well. A 2011 paper by Dilegge et al. published in Veterinary Microbiology explored the prevalence of the zoonotic pathogen Capnocytophaga canimorsus in canine oral plaque. Spread through dog bites or entry of dog saliva into cuts, doctors consider this bacterium an emerging threat to human health, which can result in localized bacterial infections and in some dramatic cases, sepsis. Little research has been done into the colonization of C. canimorsus as part of the canine oral microbiota, nor has its pathogenesis been well studied. At the time of its publication, the study by Dilegge et al. was the largest culture-based survey of C. canimorsus presence in canine tooth plaque. Moreover, it provides correlations between the bacteria’s presence in the canine oral cavity with environmental and host factors that can be used to fuel future studies. 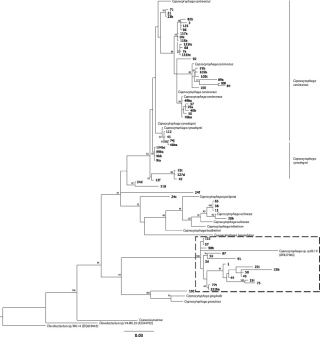 (Click to enlarge) Figure 2. Phylogenetic tree of 16S rRNA gene sequences of Capnocytophaga sequences from isolates and their related species on the basis of BLAST analysis. Source

Infections of C. canimorsus are frequently incorrectly diagnosed due to the difficult nature of isolating and identifying the species. The researchers’ first task, therefore, was to ensure accurate isolation and identification of Capnocytophaga from samples of canine oral microbiota. They collected tooth plaque from 120 test subjects and isolated candidate single colonies on trypticase soy sheep blood agar medium incubated in sealed candle jars. They then screened these isolates looking for motility, Gram-staining, and colony/cellular morphology characteristic of Capnocytophaga. They additionally used physiological assays, such as catalase and oxidase tests to further verify identity. Finally, they amplified the 16S rDNA sequence to fully conclude that the isolates were representatives of Capnocytophaga.

Of 120 dogs sampled, 100 had a Capnocytophaga species present, including multiple newly identified representatives and species that were previously thought to be unique residents of the human oral cavity. Ultimately, 49.2% of the dogs sampled carried some strain of Capnocytophaga. Interestingly, another paper published the previous year reported 74% of its 325 tested dogs to carry C. canimorsus. The methods used for identification of the species in that paper only involved 16S rDNA sampling from mixed community samples. The large difference between the two studies highlights the importance that procedures have when making conclusions in such research.

From this information, the researchers searched for potential correlations between the presence or absence of Capnocytophaga and the canine subjects’ life history traits, or on known environmental factors. They reported several interesting and potentially valuable correlations. Diet, one major factor, could not be closely examined, beyond the brand name of the food used. This could be a potential direction for research in the future.

The researchers did note, however, that only one of 17 dogs under the age of 5 months were carriers of Capnocytophaga. This is particularly interesting because puppies begin losing their baby teeth at around 4 months of age, and generally have full adult teeth by 6 months. This suggests that puppies may not inherit C. canimorsus from their parents, and that its colonization may occur in conjunction with a particular period of oral cavity maturation. 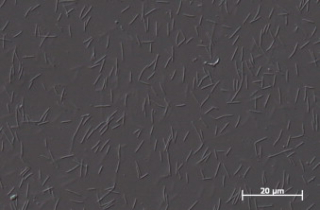 The authors also reported a gender-based positive correlation between the presence of Capnocytophaga species with dogs being spayed or neutered, where females had a lesser likelihood of hosting it when spayed and intact. There was a positive correlation between smaller/less-heavy breeds and the presence of C. canimorsus. Interestingly, they found no such correlation for other Capnocytophaga species, the significance of which remains unclear.

Tooth health, signs of disease, and plaque levels showed an interesting correlation with the presence of Capnocytophaga species, consistent with prior reports of C. canimorsus found in cases of canine periodontal disease. The obvious next step would be to investigate whether the absence of C. canimorsus in a dog’s oral microbiota community would decrease the onset or severity of periodontal disease. Indeed, in all correlations seen, establishment of causation through further work is called for.

Despite the correlations mentioned, not spaying or neutering your dog just to reduce the chance of carrying Capnocytophaga is unrealistic. After all, spaying and neutering results in health and lifestyle improvements for pets and owners alike. However, dental care is largely recommended by veterinarians and can be implemented into pet-care routines relatively hassle-free. The development of new doggie treats and water additives that help protect canine tooth health make this particularly easy. Because tooth plaque and periodontal disease was positively correlated with the presence of C. canimorsus, it is in an owners’ best interest to keep plaque to a minimum for their dog’s health as well as their own. Although C. canimorsus may be a normal, commensal part of their microbiota, keeping Fido’s dental care up to date is important for many other reasons. Dental care seems to have the potential to not only knock out plaque and tartar build-up that results in periodontal disease, but it might also prevent potential transfer of zoonotic infections to you from some of our best friends and companions. 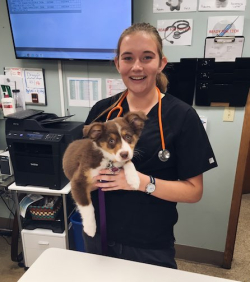 Meaghan is currently a student pursuing Bachelor of Science degrees both in Biology and in Animal Behavior at Canisius College in Buffalo NY. She ultimately plans to attend veterinary school, and will apply this upcoming fall. She has a particular interest in pathology and research directly applicable to either the cause or cure of disease, especially those common in the veterinary field. She currently does research focusing on canine cognition as part of the Hoffman research team in the Animal Behavior, Ecology, and Conservation department at Canisius.