Go Ahead, Prove that Eukaryotic Cells Arose
Via Endosymbiosis

Say you want to prove once and for all the endosymbiotic theory of the origin of eukaryotic cells, substantiating that a cell (according to many, an archaeon) acquired a bacterium that eventually morphed into a mitochondrion. The best proof requires using a time machine to take you back some 1.5 billion years ago to the event, but this technique has proven elusive so far. The second-best thing may be to try to recreate stages of the event in the laboratory, something that was in­deed carried out recently in the labs of Peter Schultz and colleagues. They reported the success­ful long-term introduction of a bacterium into a yeast cell, which sounds similar to an early step in eukaryogenesis. The chimera they constructed was stable for over 40 generations, long enough to allow it to be studied at leisure. How they did it is a good story. 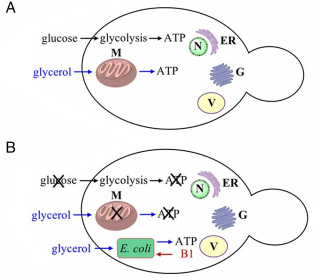 (Click to enlarge) Figure 1. Strategy to engineer S. cerevisiae–E. coli endosymbiont chimera. A Wild-type S. cerevisiae can grow on medium with glucose or glycerol due to ATP production by glycolysis in the cytoplasm and oxidative phosphorylation in mitochondria. B Yeast cells with a defect in oxidative phosphorylation cannot utilize glycerol for ATP synthesis and cannot grow in the absence of glucose. Introduction of E. coli-expressing ADP/ATP translocase and SNARE proteins into such mutant yeast can restore yeast growth with glycerol as the sole carbon source. Growth of intracellular E. coli is dependent on thiamin diphosphate (vitamin B1) provided by yeast. ER, endoplasmic reticulum; G, Golgi apparatus; M, mitochondria; N, nucleus; V, vacuole. Source. Frontispiece: The synthetic microorganisms are made up of yeast cells (blue) with bacteria (pink) inside them, which rely on each other to survive (Credit: Scripps Research Institute). Source

The investigators started out with yeast cells with defective mitochondria, presuming that since these mutants cannot grow on a non-fermentable carbon source such as glyce­rol, they would require the help of an intracellular bacte­ri­um to thrive in this environment. Tit for tat, they also en­gineered an E. coli to be defective and require the host cells' help for survival. The bacterium's deficiency was in thiamine (vitamin B1) synthesis, an essential component that must be supplied by the yeast. Now each one de­pends on the other. Since in the glycerol medium, the E. coli is the only source of ATP for the yeast, they ensured that the bacterium can transport ATP, for which they cloned into it the gene for an ADP/ATP translocase (under control of the  inducible ara promoter). For good measure, the E. coli was also endowed with GFP, a fluorescent pro­tein that makes it distinctly visible under UV light (Figure 1).

Armed with this bacterial candidate for a mitochondrial stand-in, how did they introduce it into the yeast cells? It had been shown before that both bacteria and isolated mitochondria can be fused to cell wall-less yeast sphero­plasts in the presence of polyethylene glycol, a compound that induces fusion between disparate cells. The yeast spheroplasts eagerly accepted the E. coli and, after some further manipulations (to make the host cells entirely un­able to make their own ATP), the investigators were ready to try the nuptials between yeast and bacterium. At first, that didn't work very well, as only a few yeast colonies with the desired properties arose.

This was not entirely surprising, as bacteria that habitually live inside eukaryotic cells possess spe­cialized devices to keep from being digested by the host lysosomal degradative machinery, which includes the so-called SNARE proteins. So, they introduced into the bacteria a system to disarm SNAREs. They cloned SNARE-inhibiting proteins from the intracellular pathogen, Chlamydia tracho­matis, which, sure enough, allowed E. coli to survive in the yeast cells. A few more manipulations (using a few more SNARE genes and low-level concentrations of the antibiotic carbenicillin), and they finally obtained a sizable proportion of yeast colonies harboring intracellular E. coli. The in­vestigators confirmed that these hybrid cells had the genetic make-up expected for both yeast and bacterium. Still, the yeast grew more slowly than its wild type, which they attributed to a va­riety of possible motivations. After all, who expects perfection after such intricate manipulations? 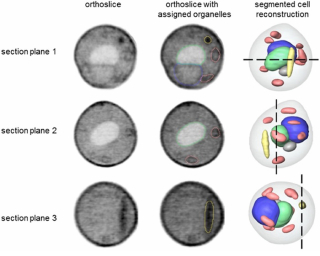 Seeing is believing, so could the researchers find E. coli cells within their yeast cells? Yes, the engineered yeasts fluoresced, indicating they were carrying the bacterial GFP. Did the bacteria behave like proper mitochondria, that is, did they shed many of their genes and be left with a mi­­to­chondria-like reduced genome? So far, what has been shown is the loss of few genes only, but the investigators expressed the hope many more could be eliminated, their essential functions being taken over by the yeast. More work and, who knows, this intracellular E. coli may be re­duced to a proper mitochondrion. Anyhow, did the bac­te­ria take on a mitochondria-ish shape, thinner and more diverse-looking than the bacteria? Not really at least not yet (Figure 2). They still look like the free-living bacteria, at least under a novel technique called Soft-X-ray Tomogra­phy (see movie). I confess, I was not acquainted with this amazing-sounding technique, which is said to be especially suited for the imaging of intact cells at high resolution.

To return to the point, namely the origin of early eukar­yo­tic cells, the authors conclude: "...features of the parasitic bacterium energy metabolism (e.g., generation of ATP through TCA and oxygen-dependent oxidative phosphorylation) to­gether with its ADP/ATP translocase could allow expansion of such colonized archaeal cells into new ecological niches native to the endosymbiont (e.g., containing oxygen and TCA substrate molecules), but prohibitive to non­pa­ra­sitized host cells. In the new niche, the tables are turned: the archaeal host cell becomes the parasite (cannot produce its own ATP) and the endosymbiotic bacterium becomes the prey as the direction of the ATP flow is reversed (just like in our experimental system where yeast is the parasite). Such ecological expansion of archaea that harbored a parasitic endosymbiont expressing an ADP/ATP translocase could be the first step in evolutionary transition from premitochondrial endosymbiont to protomitochondrion."

As the authors reasonably propose, their study opens the door to further investigations of the steps that may be plausibly have been involved in the evolution of mitochondria and therefore of eukaryotic cells. Next to having been there, this is as good as it gets.

Legend to movie. Animated sequence showing the correlation between LAC LAC (linear absorption coefficient) values in the tomographic reconstruction of a S. cerevisiae cox2-60‒E. coli ΔnadA chimera cell and segmented structures. Orthoslices from the reconstructed cell were sampled at regular intervals throughout the volume and displayed in grey scale (dark is higher LAC value). The segmented organelle volumes were overlaid into this sequence of orthoslices and then shown in isolation. Color key: blue nucleus; salmon mitochondria; green vacuole; grey lipid; yellow density not attributable to any other major organelle.