How is Light Made? – A Snippet 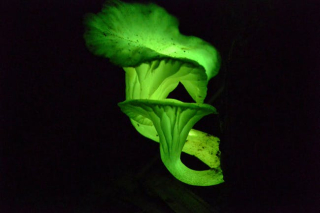 Ever since as children we saw fireflies emitting light at night, we ranked luminescence high in excitement of na­tural phenomena. We learned later that other kinds of li­ving things, such as bacteria, protists, fungi, insects, and many others, are also capable of emitting light. The magic is only slightly dimmed when we find out that light is pro­duced by a fairly simple biochemical reaction, the oxi­da­tion of the organic substrate luciferin (of which there are 9 varieties) by the enzyme luciferase (encoded by 7 gene families). Until now, the biochemistry of only a bacterial system has been described in detail.

A recent paper reports on both function and evolution of a bioluminescent system from a fungus. The investigators further showed that cloning the genes involved into other eukaryotes is suffi­cient to make them produce light. The fungus, Neonothopanus nambi (previosuly called Panus), is a poisonous mushroom known among mycologists for its bioluminescent properties. Its biolumi­nescence genes form a cluster that is conserved among three other bioluminescent mushrooms, suggesting that it may have arisen just once. 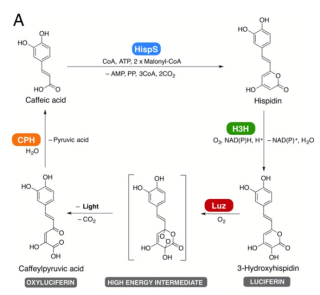 How is light produced? Luciferase catalyzes a reaction between luciferin and atmospheric oxygen resulting in a high energy luciferin intermediate. This decomposes to yield light and oxyluciferin. In turn, oxyluciferin can be recycled to luciferin and, as long as oxygen is present, the process continues

Luciferase is a popular reporter, so cloning its fungal gene in other organisms is of practical interest. Indeed, the in­vestigators reported light production after cloning it into E. coli, a yeast, Xenopus embryos, and human cells.  They also showed that tumors of mouse carcinoma cells endowed with this gene light up as readily as those with the gene from fireflies.

The authors conclude: ‘Reconstitution of fungal biolumi­nes­cent pathway in eukaryotic organisms might enable appli­ca­tions where tissues or organisms report changes in their phy­siological state with autonomous light emission. It might also push forward development of the next generation of organic architecture where genetically modified glowing plants will be integrated into buildings and city infrastructure. Apart from that, with its intriguing evolutionary history, a family of luciferases, and overall simplicity, the fungal bioluminescent system presented here is a mo­le­cular playground holding numerous opportunities for basic and applied research. ‘

A lot of work went into this. It required the collaboration of 40 investigators from 9 institutions and 3 continents.