Surprisingly, it is not particularly difficult to persuade the yeast S. cerevisiae to accept E. coli bac­teria as 'roommates', that is, as substitute for defective mitochondria (see Elio's recent blog). As 'housing mediator' you have to provide the prospective roommate with a defense against the host's SNARE system, 'disable' both partners by engineering metabolic deficiencies that can and must be compensated by the other, fuse the cells, et voilà. Call such an experiment 'forced endo­symbiosis' but be aware that it is only a first step towards organellogenesis, that is, turning an en­dosymbiont of eukaryotic cells into an organelle like mitochondria ‒ and do not confuse organel­logenesis with eukaryogenesis.

Chloroplasts, the plant organelles of cyanobacterial origin, first 'popped up' in ancestral Archae­plas­tida an estimated 1.9 billion years ago. Obviously, it took the 'roommates' a lot of time and ma­ny evolutionary steps to integrate their metabolic pathways, to co-ordinate their cell cycles, and to re-arrange their genomes accordingly. Think of the intriguing Paulinella story (covered here in STC) where even after a minimum of ~60 million years of co-evolution ‒ a new estimate sets the onset to 90‒140 million years ago ‒ an endosymbiotic cyanobacterium called 'chromatophore' is still on its way to become a chloroplast-like organelle of its unicellular algal host. Is it really? Bio­logy cannot answer this question with confidence since there is no easily defined 'checkpoint' when a well integrated endosymbiont actually becomes a bona fide organelle. Here I will introduce you to another case of (possibly) ongoing organellogenesis, a symbiosis with, again, an estimated age of ~100+ million years between weevils of the Dryophthoridae family (Curculionoidea) and Nardon­ella, a Gammaproteobacterium. This symbiosis is studied by Takema Fukatsu's lab at Japan's 産業技術総合研究所 (National Institute of Advanced Industrial Science and Technology (AIST), Tsukuba), and they show in a recent study (Open Access PDF ) that the integration of one me­tabolic pathway is well underway. You will see in a mi­nu­te (no, sorry, in several minutes) what the somewhat va­gue term 'integration' means in this specific case. They detected by in situ hybridization that Nardonella is intra­cellularly harbored in 'bacteriomes', that is, bacteriocytes associated with the larval midgut of the weevil Pachyrhyn­chus infernalis (Figure 1), and similarly in the red palm weevil Rhynchopholus ferrugineus, the giant weevil Sipali­nus gigas, and the West Indian sweet potato weevil Eus­cepes postfasciatus. In adult females, the bacterium loca­lizes in appendices of the ovaria, which suggests that they are vertically transmitted via ovarial passage (Figure 1.1.E).

Anbutsu et al. dissected larvae of four weevil species and prepared DNA for shotgun-sequencing from their bacteriomes. The majority of the DNA reads belonged to one and the same bacterial species indicating that the weevils have just one endosymbiont, Nardonella, and don't harbor, for example, Wolbachia as ~1/3 of all insects do. Thus, the authors could straightforward assemble the symbiont genomes (Figure 1.2), which, with a length of ~0.2 Mb, belong to the smallest bacterial genomes known so far (if you're a numberphile: 'record holders' are presently a few unnamed bacteria with genome sizes of ~0.1 Mb; click the header of the "Size(Mb)" column in the link for or­dering this frequently updated list). They were able to identify homologs in the Enterobacterales for more than 90% of the ~200 putative protein-coding open reading frames (ORFs) (genomes of free-living bacteria with genome sizes of 3‒5 Mb usually contain about 1/3 unknown ORFs). 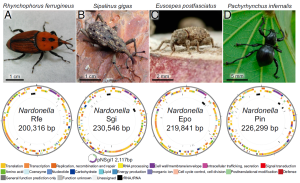 Despite being extremely reduced, the Nardonella genom­es retain minimal but complete sets of genes for trans­cription and translation: for rRNAs, for all tRNAs, for all 20 aminoacyl tRNA synthetases, and for all ribosomal proteins (only a homolog of the E. coli sra gene encoding stationary-phase ribosomal protein S22 is missing). More on the replication genes in part 2. No synthesis genes for 19 of the 20 amino acids were detectable, no functional nucleotide synthesis pathways, no TCA cycle genes, (al­most) no pentose-phosphate pathway genes, no functio­nal glycolysis pathway. There's a substantial absence of genes for energy metabolism (no ATP operon!), sugar transport, lipid synthesis, and a flagellar apparatus. In fact, the Nardonella genomes resemble a recipe for an 'in vivo coupled-transcription + translation kit' much like those for the commercial in vitro kits based on cell ex­tracts that we routinely use in the laboratory today. The only synthesis pathways that seem to be complete are those for peptidoglycan and tyrosine (Figure 1.3). To test tyrosine synthesis by Nardonella experimentally, Anbutsu et al. dissected bacteriomes from mature P. infernalis lar­vae and incubated them individually in sophisticated 'hanging drop tissue cultures' with a culture medium containing 15N‑labeled glutamine (like glutamate, a common source of amino groups in most amino acid synthesis pathways). They found virtually no label in essential amino acids, which reflects the absence of the respective synthesis pathways in both endosymbiont and host. Some nonessential amino acids were labeled likely due to the synthesis pathways operating in the host bacteriocytes. But importantly, tyrosine showed a ~50% proportion of labeling, indicating that in­deed Nardonella in the bacteriocytes preferentially synthesizes substantial quantities of tyrosine. But why tyrosine?

Unlike butterflies or mosquitoes, adult weevils have cuticles (exoskeletons) that are so rigid that 19th‑century entomologists ‒ habitually collecting insects by the thousands ‒ had trouble impaling them with needles for fixing on presentation cartons (see frontpage). Like the cuticles and elytra (wing covers) of other insects those of the weevils are composed of highly crosslinked collagens and insoluble proteins known as cuticlins (containing dityrosine), together with chitin, glycopro­te­ins and lipids. Weevil cuticles have densely interlocked exocuticles and endocuticles, which pro­bab­ly contributes to the high mechanical strength of their exoskeleton. Pigmentation ('mela­ni­za­tion') and hardening ('sclerotization') of their cuticles requires tyrosine as input for a cascade of chemical reactions, which is provided by Nardonella, and the tyrosine derivative L-DOPA (see here for a diagram. Source). Anbutsu et al. assume that if Nardonella could synthesize tyrosine from phenylalanine (the usual 'workaround' and the reason why tyrosine is considered a 'semiessential' amino acid), it would readily lead to depletion of the essential amino acid phenylalanine in weevils, and this probably being the reason why it has kept this phenylalanine-independent synthesis pathway for tyrosine in the first place. 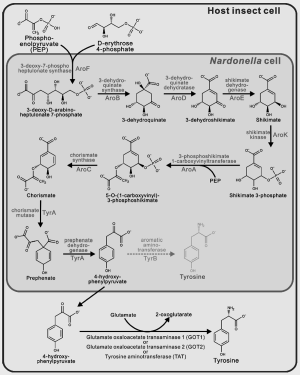 (Click to enlarge)
Figure 1.3. Schematic diagram of the tyrosine synthesis pathway presumably operating in the Nardonella‒weevil endosymbiotic system. Note that the Nardonella genomes do not encode E. coli AroD homologs (type I 3-dehydroquinate de­hydratase) as suggested by the diagram but the non-homologous AroQ (type II 3-dehydro­qui­nate dehydratase) present in many genomes of the Enterobacteriaceae (author's observa­tion). Source

It is known that endosymbionts tend to get lost when de­veloping insect larvae are exposed to higher tempera­tur­es (see here for an overview. Source). Indeed, Nardonella numbers (measured as groEL gene copy numbers by qPCR ) dropped by more than 2 orders of magnitude when P. infernalis larvae were reared at 30°C instead of 25°C. Concomitantly, the 15N-labeled tyrosine titer in bacteriomes of heat-treated larvae was reduced to 1/150 of the level found in the bacteriomes of control larvae, underpinning the role of Nardonella for tyrosine synthe­sis in the symbiosis. But since none of the larvae reared at 30°C reached adulthood, the researchers could not exclude that the heat treatment was detrimental to pu­pal/adult survival rather than endosymbiont loss. They therefore developed an agar-based diet to which they added low doses of rifampicin (a potent inhibitor of bacterial RNA polymerases) that reduced Nardonella titers (again determined by qPCR) to ~1/10 of that in control insects reared with the antibiotic-free diet. Anti­biotic-treated larvae developed somewhat slower but normally and reached adulthood. While the majority of the adult insects that emerged from the control diet were morphologically normal with black and rigid elytra (wing covers), the Nardonella-suppressed adult insects that emerged from the antibiotic-supplemented diet showed morphological abnormalities with reddish, crumpled, and/or deformable elytra. By monitoring the hemolymph for tyrosine and L-DOPA across all deve­lopmental stages of the insects they found ~10× higher concentrations of both compounds in control insects than in antibiotic-treated insects. Tyrosine and L-DOPA concentrations were high­est in the pupal stage, which suggests active mobilization of both metabolites at this develop­men­tal stage of active adult body formation. They decreased within 24 h after teneral adults (recently molted, exoskeleton yet to harden, incomplete pigmentation) emerged. Taken together, these re­sults show ‒ scientists tend tone this down by saying 'strongly suggest' ‒ that tyrosine provision­ing, which peaks during the pupal stage and underpins cuticle hardening, is the essential role of the weevil‒Nardonella endosymbiosis. But wait, I have not yet arrived at the 'integration' step...

When Anbutsu et al. had reconstructed the tyrosine biosynthesis pathway from the Nardonella genomes they realized that one piece of the puzzle was missing: all four lack homologs of the tyrB gene encoding the aminotransferase responsible for the last step in the pathway (Figure 1.3, bot­tom). They (certainly) knew that in the aphid-Buchnera symbiosis the aphids have reserved the right to take the final steps of amino acid synthesis themselves and left the delivery of the raw products to their symbionts. Could it be that also the last step in tyrosine synthesis is performed by the weevil host? To find that out, they sequenced RNA extracted from bacteriomes and midguts of mature P. infernalis larvae reared on the control diet and the antibiotic-supplemented diet. They found two transcripts, GOT1A and GOT2A, predominantly in the bacteriomes of Nardonella-carry­ing control insects that are orthologous to two known Drosophila transaminases potentially cap­able of converting 4-hydroxy-phenylpyruvate to tyrosine by transamination (the 'last step'). How­ever, the researchers were not content with this fine piece of 'forensic' detective work and ma­ni­pulated the expression of GOT1A and GOT2A in vivo. In biological systems that are not amenable to genetic methods this is today conveniently done by gene knock-down experiments with in­ter­ference RNA (RNAi), that is, by artificially reducing the amount of translated mRNA from a target gene without interfering with its transcription. When they injected dsRNA targeting GOT2A and GOT1A into mature P. infernalis larvae they observed a significant suppression of both. More tel­lingly, in vitro culturing of bacteriomes dissected from mature larvae, which had been injected with dsRNAs targeting the transaminase transcripts, revealed significantly reduced tyrosine production correlating with drastically reduced expression levels of GOT2A and GOT1A. These results con­firm­ed that the host's aminotransferase genes are up-regulated in the bacteriome, and needed for Nardonella-mediated tyrosine production in the bacteriome. By now, the term 'integration' should not be vague any longer.

Many but not all weevils harbor Nardonella endosymbionts, not only those of the Dryophthoridae family mentioned here. In fact, 16S rRNA based phylogenetic studies indicate that Nardonella is the ancestral primary symbiont of Dryophthorinae weevils but during diversification of this Cur­culionidae family the co-evolving endosymbionts were apparently re­placed in several lineages by other enterobacterial symbionts/endosymbionts. Sodalis-like sym­bionts prevail in the genus Sito­philus, and Curculioniphilus, an enterobacterium distinct from Nar­donella and Sodalis, was acquired by the common ancestor of the Curculionini weevils and took over the original symbiont. It is un­known what led to the extinction or replacement of Nardon­ella in their various hosts ‒ whether their genomes didn't stop shrinking in size up to the point of be­ing useless or whether the weevils changed their habitats and adapted, for example, to a more tyrosine-rich diet making the Nardon­ella symbionts dispensable. And indeed, endosymbiont re­placement events are not even excep­tional. They were first observed in aphids that in their majo­rity harbor Buchnera endosymbionts in their bacteriocytes. However, about 20 aphid species of the Cerataphidini tribe have lost Buchnera and acquired yeast-like fungal symbionts in their body cavity. Similarly, Meimuna opalifera cicadas employ a fungus to compensate for their decaying Hodgkinia endosymbionts (see Elio's recent post here in STC). All three cases are strong reminders that symbioses are never evolutionary end­points but, as stable on the evolutionary timescale and well attuned as they may appear, they re­main dynamic. Including the possibility of their demise. And not only endosymbionts but also fully-blown organelles can get lost. Giardia lamblia comes to mind, which left its mitochondria some­where on the track.