« Talmudic Question #161 | Main | Dental Care for Your Pet: For Their Health and Yours »

When I was drafting part 1 of the wee­vil–Nardonella story, the symbiosis aspect, I could hardly wait to take a deep­er look at the endosymbiont geno­mes, literally 'reading' the annotated genomes. Here now I give you a summary of what I read. Yet, do not take this as peer-reviewed scientific work, it's just a finger exercise..

Figure 2 in the Anbutsu et al. paper (Figure 1.2 in part 1, or here), is so stuffed with information about the weevils' Nardonella endosymbiont genomes that I better tear it apart a little to show you that it is actually possible to observe genome reduction 'at work'. As said in part 1, the genomes are tiny (0.2‒0.23 Mb) and contain ~200 open reading frames. Earlier, Moran and Mira had par­ti­al­ly reconstructed the ~4 Mb genome of a hypothetical enterobacterial ancestor of the small Buch­nera genomes (0.45‒0.65 Mb) by what could be aptly called 'in silico molecular archaeology'. A si­milar process of losing more than 90% of the genome of an enterobacterial ancestor was ‒ and pro­bab­ly still is ‒ underway in Nardonella. Figure 2.1 shows that today the four genomes are still almost completely syntenic, that is, have much the same gene order that is only interrupted by very few indels (=insertions/deletions), inversions and transpositions (see legend to Fig. 2.1). This high de­gree of synteny makes it intuitively clear that the four Nardonellas are isolates ‒ or if you wish: strains ‒ of one single bacterial spe­cies irrespective of how you prefer to define a 'bacterial spe­cies' (see our post on 'bacterial species'). If you then consider that these Nardonella strains co-evolved with their present weevil hosts, that is, 'survived' the speciation of the latter from their common ancestor, it is mind-blowing how stable these genomes are over millions of years of con­stant 'editing' despite ongoing genome reduction. 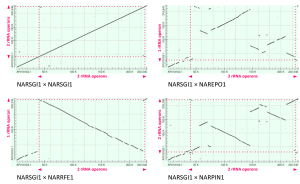 The ten-or-so gaps in the NARGSI1 (0.23 Mb) × NARFRE1 (0.2 Mb) dotplot in Figure 2.1 add up, roughly, to the ~30 kb difference in chromosome size of both isolates. Micro-rearrangements (<1 kb) are not visible at the low re­so­lu­tion of the dotplot but it is apparent that an inversion of ~83% of the chromosome occurred in NARFRE1 (Fig. 2.1, NARSGI1 × NARFRE1). This inversion took place between the two rRNA operons in NARSGI1 that are transcribed in opposite direction to each other, and was followed by loss of one rRNA operon in NARFRE1, the smaller geno­me of these two (red arrows/dotted lines in Figure 2.1). Genomic inversions between rRNA operons are not that uncommon, a well-known case is the inversion in the E. coli lab strains MG1655 and W3110 (see here). The same recombination has occurred in the pair NARPIN1 and NAREPO1 that appear as mirror images when projected onto NARSGI1: after inversion of ~88% of the genome between the two oppositely oriented rRNA operons in NARPIN1 one rRNA operon was lost in NAREPO1, the smaller genome (see here). Already from such a 'quick 'n dirty' analysis of genome dotplots it is possible to infer that the ancestor of these four Nardonella isolates had at least two rRNA operons (free-living enterobacteria usu­ally have ~5), while genomic inversions in two separate lineages with subsequent loss of one rRNA operon ‒ in both cases 'the other one' ‒ led to the isolates studied by Anbutsu et al.. This tentatively inferred branching order is also seen in a monogenic phylogenetic tree based on a single protein (see Figure 2.3 below). It would be tricky but in principle possible to resolve the limited number of smaller inversions and transpositions along the evolutionary trajec­tory of the Nardonella quartet. Yet I stop right here because untangling these inversions/transpo­si­tions is beyond the scope of a blog post.

Figure 2.2. Codon frequency for selected amino acids in the GyrB proteins of E. coli and the four Nardonella isolates (grey background highlights significant differences). Protein accession num­bers are given in the legend to Fig. 2.3. Author's own work.

But there is one more thing (to quote Peter Falk's 'Co­lum­bo'). The extraordinary AT‑richness of the Nardonella ge­nomes is, of course, reflected in the narrowly spaced co­ding regions of their ~200 genes. An aside, a very recent paper in PNAS reports on 15.5 kb small plastid genomes of Balanophora plants with 88% AT, and up to 98% AT in one of their 19 ORFs, which apparently requires some tweaking of the genetic code to obtain useful proteins. In Nardonella and other endosymbionts with reduced and AT-rich genomes, AT-rich codons should thus be prefer­red over GC-rich codons as pointed out by Nancy Moran earlier. This is actually the case as you can see in Figure 2.2 where I took the evolutionary well conserved GyrB protein (beta subunit of toposiomerase II) as example. Note that the strongest tendency towards AT-rich codons is found in NARFRE1 GyrB, that is, in the Nardonella genome with the highest AT-content (84.7%). It's surprising ‒ if not out­right shocking ‒ that the amino acid composition resulting from such a strongly skewed codon choice does not completely mess with protein identity. Yet, the GyrB proteins of the Nardon­ella isolates and E. coli still share 40‒50% identity (=identical amino acids at corresponding positions). Also striking, the four Nardonella GyrB proteins share only 50‒60% identity among each other, while identity exceeds 80% among GyrB proteins from different species of the Enterobacterales, as expected for homologous proteins of closely related species. 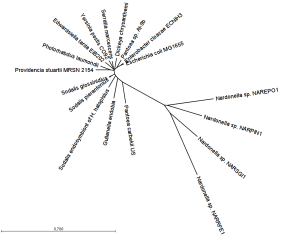 When these numbers are visualized, it becomes imme­di­ately clear that single-protein phylogenies are, well, use­less for determining the phylogenetic position of Nardon­ella within the Enterobacte­ra­les (Figure 2.3, with repre­sen­tatives of 6 of the 8 families in this taxonomic order). Also, conca­te­nated (conserved) proteins do not easily yield more robust phylogenies. And phylogenies based on nucleotide sequences, including 16S rRNA phyloge­nies, tend to fall short when genomes with greatly va­ry­ing AT‑contents are included (a well-known phenomenon termed long branch attract­ion). This is a methodological impasse that has also not yet been convincingly tackled for other endo­sym­bionts with reduced and highly AT-rich genomes, say Buchnera aphidicola (~74% AT). Some pro­gress was made in recent years on gene synteny-based phylogenies (see here, for example, and here) but there is no commonly accepted approach on how to reliably rate various synteny features to obtain distance matrices. You see in Figure 2.3 that GyrB of NAREPO1 and NARPIN1 branch off together as do NARSGI1 and NARRFE1 GyrB. You can deduct from Fi­gure 2.1 that the genomes of these 'pairs' are also more closely related to each other than to tho­se of the other pair because they have less synteny breaks by inversions or indels. So, for phylo­ge­ny, synteny analysis is a straightforward qualitative assess­ment but it does not immediately sug­gest a feasible quan­titative approach.

Anbutsu et al. state in their paper that  "...the tiny genomes encode minimal but complete gene sets for bacterial replication, tran­scrip­tion, and translation." That's clearly not the case for the replication genes if one literally 'reads' these genomes carefully. Since Nardonella is a member of the 'endo­sym­biont branches' of the Enterobacterales, such a "...mini­mal but complete gene set for bacterial replication" should be a close match to what is known for E. coli. However...

Taken together, this reduced set of replication genes in the Nardonellas leaves the question wide open of how exactly they manage the replication of their small chromosomes. It could be well worth studying whether a diminished proofreading efficiency ‒ think of the missing theta subunit ‒ con­tributes to the strong shift towards AT-richness in the Nardonella genomes. But to make it clear, this criticism does not call the main findings of the study by Anbutsu et al. into question.

When you sometimes experience a sudden "inordinate fondness for beetles" (attributed to J.B.S. Hal­dane) you may enjoy the impressive picture collections here or here. A fair warning though: there are more than 400,000 described species of beetles, among them ~70,000 weevil species (Curculionidae). In case you get eventually tired of looking at beetle portraits, take a deep breath and consider the many symbioses between bacteria and beetles that still wait to be discovered! Surprises guaranteed, take my word.