Book Review: The Power of Plagues

The Power of Plagues, 2nd Edition 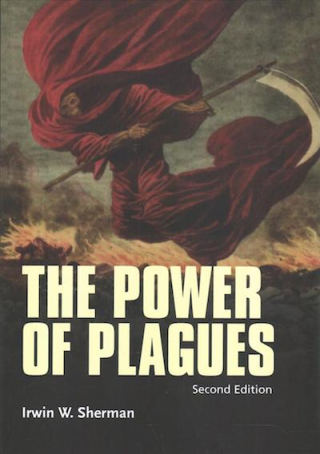 Microbiology nonfiction books tend to fall into the acade­mic category, basically as curated collections of review ar­ticles that detail a relatively specialized niche of the field. At the other end of the spectrum lie those books written purely for a general audience that might bring in micro­bio­logical themes within a larger scope, usually human health.

To make a theological comparison, the latter can be like reading the book of Ruth (which doesn’t even mention God), and the former like Leviticus (which is filled with laws and measurements related to dealing with God). Both are valuable. The casual, uninitiated reader isn’t usu­ally keen to drown in dry details, while the discerning reader with foundational knowledge might crave some­thing more than a surface skim. The Power of Plagues is an example of a much rarer book that attempts to balance those two extremes. The many readers of this blog who have a deep interest in microbiology or disease – but who aren’t specialists that need to pour over drier minu­tiae – will appreciate this book, now in its second edition.

Sherman, a Professor Emeritus (UC Riverside), Visiting Professor (UCSD), and researcher into the biochemistry of malaria has the background to give readers microbiological details. And he fre­quently does so, such as when discussing mechanisms of artemisinin activity and resistance in Plasmodium. But he avoids going too deeply into that rabbit hole of scientific detail, or getting caught up in the style of academic review articles. Instead he writes with a straight-forward and naturally flowing text that emphasizes historical anecdotes and cultural references. For example, in a chapter on Yersinia pestis, Sherman describes actions taken by the Venetian Republic to re­strict dis-embarkment from cargo ships for 40 days (a quaranta that gave rise to our word qua­ran­tine). Soon after he discusses cultural impacts of the Plague, from Bruegel paintings to Monty Py­thon and the Holy Grail.

The Power of Plagues devotes most of its chapters to the stories of a specific pathogen/disease that has affected humans on a large scale through outbreak or epidemic. Most of these 'plagues' are bacterial (e.g. Cholera, Typhus, Leprosy), with HIV and Smallpox featured from the viruses, and a chapter on malaria including the sole featured protist. However, other viruses (e.g. Influenza, Measles) appear in a chapter devoted to Immunization, and Sherman discusses some viruses, protists, and animal parasites within chapters entitled "Six Plagues of Africa" and "Emerging and Re-Emerging Plagues." As far as I can recall, fungi don’t appear, besides being mentioned as se­con­dary AIDS-related infections. Given the increasing problems of fungal infection to animals in general (including humans), I find this unfortunate.

The strong focus of each chapter is a strength of the book, one that makes it not only a good book for general reading, but also for use in classes with specific chapters as supplemental material, or the entire text in a history of disease survey. However, the organization of the chapters them­selves in the book perplexes. The book opens and closes with reasonable topics. But in between, the chapters are placed seemingly randomly. 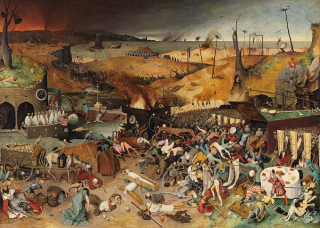 The Triumph of Death, an oil panel painting by Pieter Bruegel the Elder painted circa 1562. The painting, housed in the Museo del Prado in Madrid illustrates that no one in humanity, no matter their social class, is safe from the scourge of plague and death. Source

The first chapter defines "The Nature of Plagues," and the two that follow provide historical context, one re­garding how plague outbreaks are affected by human civilization and then one with a survey of "Six Plagues of Antiquity." The actual microbiological agent responsible for some of these ancient plagues remains controversial in some cases, but Sherman addresses the predominant interpretations and the data that has led researchers to particular conclusions. Unfortunately, this chapter first introduces the problem that some diseases or species are mentioned across different chapters of the book, leading to redundancies in the text.

Rather than continuing on a temporal organization of chapter topics, Sherman follows these chapters of con­text with one on the Black Death, but then jumps to AIDS, and then to Typhus. In the middle of this disease-specific heart of the book is the aforementioned chapter on immunization and one that follows on antisepsis and antibiotics. The end of the book then features the chapters men­tioned above on 'miscellaneous' African diseases and emerging diseases. This last chapter is new to the second edition of The Power of Plagues, and may not be substantive enough to warrant a new copy if you've already read the first. I'm unclear exactly how much other chapters have been updated, although errors from the first edition that were subsequently noted have been cor­rect­ed.

"Six Plagues of Africa" illustrates, in part, the only significant critique I have of The Power of Plagues, namely that the text often seems outdated in cultural perspective and representation. Lumping these diseases together based on geography and given them only cursory treatment is problem­at­ic, when each warrants the same in-depth treatment as the previous topics receive. Similar issues arise in the earlier chapter on AIDS that Sherman ends with ideas that seem stuck in the conserva­tive 1980s.

Despite such criticism, The Power of Plagues is a fantastic read overall, with broad appeal, and could be effectively read in parts and in whatever order desired. It includes appendices that cover biological concepts that might not be familiar to some readers, as well as a bibliography and works cited for those facts that are referenced in text. The full-color photos and illustrations are wonderful, significantly adding a visual perspective to many of the historical events Sherman ad­dresses.