Escape From the Wall

Who would have thought it? That the bacterial cell wall would turn out to be so readily dispens­able. Among the first lessons I taught on bacterial cell structure was the fact that the ever present cell wall, composed predominantly of peptidoglycan, forms a protective shield around the cyto­plas­mic membrane. An essential shield that prevents bacterial cells from lysis in hypotonic envi­ron­ments, protecting them from the constant and extreme changes in osmolarity they might en­counter. Of course, there was an exception: the Mollicutes, that bacterial class that lacks a cell wall (think Mycoplasma, Spiroplasma, Phytoplasma, etcetera). It made sense, however, that Mollicu­tes had been able to dispense with the cell wall through the course of their evolution given that they lead parasitic lifestyles. So, I felt comfortable with the general statement that the cell wall was an essen­tial component of the bacterial cell. But for a long time there's been reason to believe that the shield may be shed. 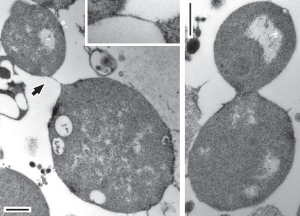 Enter the L-forms. These somewhat mysterious cell-wall-deficient variants were described by Emily Klieneberger in 1935 as "abnormally large swollen elements among the bacillary chains" of Streptobacillus monoliformis and a "delicate streptococcus." She noted that this "peculiar but highly characteristic developmental cycle" resembled the mollicutes (known back then as pleuropneumonia-like organisms or PPLO). Given that she was working at the Lister Institute in London at the time, she baptized these "swollen elements" as L-forms, and the name stuck. For a long time others had difficulty in reproducibly isolating L-forms and the concept that wall-less cells might be a developmental phase of bacteria languished in relative obscurity and controversy. That all changed a decade ago when Leaver et al., from the laboratory of Jeff Errington, published "Life without a wall or division machine in Bacil­lus subtilis," wherein they reported the isolation and characterization of L-form cells in this highly tractable model bacterium. Interestingly, they found that a mutation in the ispA gene (encoding farnesyl diphosphate synthase), involved in the synthesis of several essential lipids, was sufficient to enable cells to grow without a wall. These results provided a way to study L-forms in great de­tail. For one, it became clear that these cell-wall-deficient cells did not require a cell division ma­chine, physical forces were enough to fragment cells (Figure 1). We now know a lot more about L-forms than a decade ago, as the numerous publications on the subject – many of them from the Errington lab – attest. (STC did cover L-forms before, but that was nearly a decade ago.)

Do L-form cells have a function in the life cycle of the bacteria that make them or are they some sort of meaningless artifact? Two facts were certainly suggestive of a role in infection: (i) L-forms are resistant to antibiotics that target pep­ti­doglycan synthesis (for example, ß-lactams) and (ii) L-forms were classically observed in samples from animals (humans included) and plants. But it was not until recently that a possible molecular explanation for a role in infection came to light in a paper by Rojas et al., again from the Errington group. Therein the authors show that when some Gram-positive bacteria are kept in high osmolarity media, treatment with ß-lactams does not lead to rapid lysis. Quite in­terestingly, treating those cells with lysozyme (an enzyme that breaks down peptidoglycan) res­cues their viability by allowing the escape of L-form cells. Their results included tests in mammali­an macrophages, where they showed protection from antibiotic treatment through the generation of L-forms, presumably by lysozyme or similar bacteriolytic activities of the innate immune sys­tem. All in all, pretty nice evidence in support for an important role of cell-wall-defective cells in surviving antibiotic treatment through the use of a component of a host's innate immunity. Might there be other instances (perhaps unexpected) of wall-less cells being part of a developmental stage in other bacteria? Enter the filamentous actinomycetes.

Before proceeding, a whiff of taxonomy regarding the filamentous actinomycetes. The term acti­no­mycetes is widely used when referring to a member of the Order Actinomycetales within the phylum Actinobacteria (which along with the Firmicutes, make up the Gram-positives). There are about 15 Suborders of Actinomycetales but, apparently, only one of these is known for its fila­men­tous growth, the Streptomycineae, which itself contains a single Family, the Streptomycetaceae, which has two genera, Streptomyces and Kitasatospora. Now we are getting somewhere… Strepto­myces and the closely related but distinct Kitasatospora are the filamentous actinomycetes. Now you know. While Kitasatospora may not be a household name, it is highly likely that many STC read­ers are very familiar with the Streptomyces. Think antibiotic producers, no surprise it is the largest genus of Actinobacteria! But it is with Kitasotaspora where we the story of cell-wall-defective filamentous actinomycetes begins.

The groups of Dennis Claessen and Gilles van Wezel at Leiden University were interested in investigating the effects of high osmolarity in filamentous actinomycetes. Given their long-standing interest in cell division and the "oddity" of the apical growth of these cells, they focused on the effect of high osmolatiry on growth and division. They were aware of prior work on Streptomyces showing that apical growth was arrested under high osmolarity. That's the starting point of a new paper by Ramijan et al. from the Leiden groups. Like the prior reports, this paper reports growth defects of a filamentous actinomycete, in this case Kitasatospora viridifaciens, in high osmolarity (above 0.5M sucrose, as well as in high concentrations of other osmolytes). In liquid cultures, lag phase was much longer. (Alas! We at STC, and particularly Elio, are never happy to see optical density plotted linearly in growth curves, but that's another story… We'll for­give… maybe.) On agar plates the difference in colony number and size were both dramatically re­duced when in the presence of 0.5M sucrose. When you get that kind of difference in the growth of bacteria, what do you do? Well, I know what I would do: look at them! And that's precisely what the authors did. The beauty of a single simple observation, it can change the course of your expe­ri­ments dramatically. The results were striking (Figure 2). This is a case of "a picture's worth a thou­sand words" and since our posts aim to be in the order of fifteen hundred words and I'm already reaching that length, I will not use too many words to describe these beautiful images. When grown in 0.62M sucrose K. viridifaciens no longer grew solely as mycelia, spherical cells containing DNA were also apparent. Clearly, Klieneberger's 1935 statement "abnormally large swollen elements among the bacillary chains" is fitting here. The authors termed these "S-cells" because they were formed when the bacterium was stressed. These S-cells were not exactly L-forms; they were larger than L-forms generated with lysozyme plus penicillin treatment and retained attached nascent pepti­do­glycan fragments which the L-forms lacked. Time-lapse movies revealed that the S-cells formed at the tip of the hypha as growth was arrested due to the high sucrose. The S-cells proved to be a transient state. When separated from mycelia and placed on agar with sucrose they switched back to mycelial growth and gave rise to colonies. Interestingly, prolonged incubation in high sucrose resulted in some of the S-cells becoming L-forms through the accumulation of mutations.

Is the formation of S-cells a common developmental feature among filamentous actinomycetes? The authors tested 96 wild isolates and four reference Streptomyces strains (S. coelicolor, S. lividans, S. griseus and S. venezuelae). Only 7 of the wild isolates and only S. venezuelae gave rise to S-cells. So, not ex­actly universal, but still, not restricted to a single species. And perhaps if the conditions were twea­ked and different stressors used for each strain tested, more strains might give rise to S-cells. Exactly how do the S-cells form? That remains to be studied but the authors hypothesize that "an imbalance between cell wall synthesis and cell wall turnover could locally lead to changes in the thick­ness or structure of the cell wall, allowing S-cells to escape from the sacculus." I like that sense of es­cape, like bricks being hammered out of a wall, allowing the escape of those behind (Figure 3). 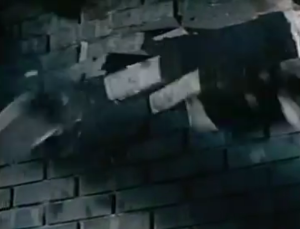 Figure 3. Bricks being hammered out of a wall, from Pink Floyd's 'The Wall'. Source

Where might the ability to form S-cells prove adapative for filamentous actinomycetes? The authors briefly point to environmental conditions where these bacteria might encounter high osmolarity: "Environmental fluctuations can dramatically influence the availability of water in ecosys­tems and present osmotic shock conditions to organisms. For instance, microorganisms living in hyperarid regions or hypersaline aquatic environments are frequently exposed to desiccation or hypertonicity. Also, microbes in snow and ice habitats experience low water availability and hypersaline or hyper-acidic environments." Here I want to offer an entic­ing alternative, which is perhaps the reason I found these results particularly exciting: plants. There's a long history of ob­servations describing what appear to be L-forms inside plants cells but, in general, these ob­servations have not been pursued too deeply. At the same time, there's been a recent explosion of interest in isolating endophytic actinomycetes because of their being a potential source of novel bioactive compounds. But little or no work has been done in characterizing how actinomycetes grow inside the plant. In casual conversations I've heard that actinomycetes inoculated in the root can be later isolated from the leaves. Are they getting there through the plant tissue? Could it be that they are able to colonize and travel through the plant, go intracellular perhaps, not as mycelia but as cell-wall-deficient S-cells? I don't know, perhaps someone out there knows or will soon find out. I hope so. I certainly think it's an idea worth exploring. Sometimes, you have to think outside the wall!