« Escape From the Wall | Main | Book Review: The Power of Plagues » 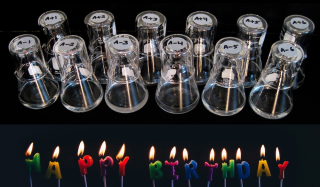 (click to enlarge) Figure 1. (and Frontispiece): Happy 31st Birthday LTEE! (Image adapted from a photograph by By Brian Baer and Neerja Hajela, Source)

Come this Sunday, February 24, 2019, all of us at STC will be raising a celebratory glass in honor of the remarkable LTEE, the E. coli long-term evolution experiment, which will be reveling in its 31st birthday. Perhaps the most influential and celebrated ongoing project in experimental evolution, LTEE was started by Richard Lenski on February 24, 1988 at the University of California, Irvine. The experiment was moved to its current home, Michigan State University circa 1991.

The beauty of the experiment lies in its conceptual simplicity: twelve cultures of an E. coli strain have been kept in a shaking incubator at 37˚C, in glucose minimal medium (the glucose concentration is very low, 25mg/liter, such that the cultures enter stationary phase at 5x107 cells/ml). Every day, each culture goes through lag phase, grows exponentially for 6.64 doublings (generations), and enters stationary phase. The next day, each culture is propagated by transferring 0.1 ml of the prior day's culture into 9.9 ml fresh medium. That's it! Beautifully simple or, simply beautiful.

Repeat, and repeat, and repeat, ad infinitum (or so we hope). Repeat (nearly) every day for 31 years and, yes, this Sunday, the 12 cultures will have undergone some 71,408 generations (give or take a few). One more thing, a living record of their evolution has been kept: every 500 generations, a sample of each culture has been frozen, thus keeping a collection of "fossil records" of the populations. What a wealth of knowledge lies frozen in those samples! We're confident we'll continue to be amazed by this experiment for decades to come.

The LTEE has generated a wealth of knowledge about evolution, including the initial observations on dynamics of the fitness gains that each culture underwent and the stunning finding of a mutant that after some 31,000 generations took over one culture because it had gained the ability to utilize the citrate that was present in the medium. (We've discussed this in STC before.) But perhaps more importantly, LTEE represents a unique and priceless resource to study, with a multitude of approaches and new technologies, the process of evolution in real time.

We celebrate this wonderful experiment, and all the people that have been involved in it, both for what it has already contributed and for what it will contribute in the future. We also want to take this opportunity to celebrate Richard Lenski. While he might best be known for the LTEE, his contributions to the field of evolution, and his ability to very clearly and compellingly communicate the importance of science in advancing human knowledge, are indeed outstanding in every respect. We encourage all of our STC readers to follow him as we do (@RELenski, Telliamed Revisited, Experimental Evolution). A most remarkable scientist of our age. Rich, many thanks and congratulations for all you have contributed!

Watch Richard Lenski explain his research into the evolution of bacteria, in a video produced by ASM in 2012.