« Inside Earth, Microbes Approach Immortality | Main | Escape From the Wall » 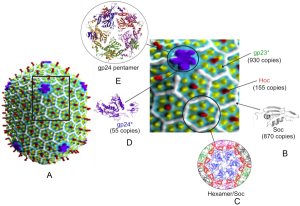 "The power of evolution is revealed through the diversity of life." Aha! It was solemnly declared by the Nobel Prize committee in their statement announcing last year's chemistry prizes for "the directed evolution of enzymes [and] phage display of peptides and antibodies". Royal aca­demies – national or other academies likewise – tend to add luster to the often horribly arduous efforts of sci­entists with dramatic formulations. I'd like to tone it down a bit, and suggest that the laureates and their nu­merous collaborators cleverly applied evolution's "tin­kering" approach of genetic change and selection (as François Jacob called it, see also here in STC) to evolve no­vel enzyme-substrate and protein-protein interactions. Phage display is a particularly intriguing and powerful technique with numerous applications in research and medicine (and worth a separate post). So far, however, phage display is limited to evolving pairwise interactions of proteins with other proteins or nucleic acids, for ex­am­ple antigen-antibody interactions. I'm not aware of studies aimed at evolving three-dimensional macromolecular structures like, for example, virus capsids. Today, we know the "rules of the ga­me" quite well when it comes to three-dimensional protein complexes such as virus capsids (in prokaryotese: phage heads) that assemble from a handful of subunits (Figure 1). Much of this know­ledge about the "rules" comes from mutants with defects in coat/head proteins and in vitro assembly studies (Dale Kaiser was among the pioneers in 1973). And lastly, for a number of vi­rus­es and phages we have an understanding of their fine structure in the nanometer range (see here for an example). But we don't have a good sense of how evolution "shaped" a probably rather fluffy ancestral T4 gp23 protein stepwise by trial and error to finally make it interaction-proficient in a way that lets it oligomerize into icosahedral shells. Where do the instructions "go make icosa­hedrons" come from?

Junwei Wang and his colleagues, all physicists at the Faculty of Engineering at Erlangen University, Germany, certainly didn't waste more than a single thought on virus capsids when they designed their particular game of pétanque. Rather, they set out to study spontaneous cluster formation by polysterene particles. The particles had uniform surfaces and negligible interactions (attraction/re­pulsion), making this a very simple system. Yet, the clusters they obtained were remarkably well-ordered, shedding light into the "rules" of cluster formation. 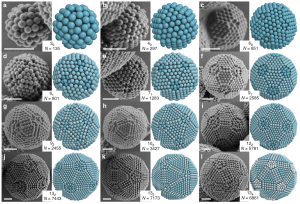 Experimentally, they studied cluster formation at dif­fer­ent polystyrene particle concentration in a microfluidic device (see here). The particles were uniformly 244 nm in diameter and stabilized by carboxylate surface groups. They reduced the water content by evaporation at vari­ous rates. They found that the volume fraction of the particles gradually increased towards a solidified cluster. At the lowest evaporation rate, the dominant species of the observed clusters (up to 75%) evolved from buckled to spherical to icosahedral symmetry with increasing as­sembly time. Only very slow evaporation provided suffi­cient time for the particles to arrange into icosahedral clusters.

Wang et al. knew from diverse systems that clusters of metal atoms, virus capsid proteins, noble gases, and nu­cleons have properties that depend sensitively on the number of constituent particles. Certain numbers of con­stituent particles were termed 'magic' because they lead to clusters with closed shells and exceptional stability. So far, magic number clusters had been exclusively found with attractive interactions between particles (among atoms, interactions among proteins). They now show that also colloidal particles with negligible interactions in an emulsion droplet spontaneously organize into a series of clusters with precisely defined shell structures, that is, magic number clusters (Figure 2). Their free-energy cal­cu­lations suggest that particle clusters with magic numbers possess higher thermodynamic stability than those off magic numbers. And they found by modeling that a complex kinetic pathway is re­sponsible for the efficiency of this system in finding its minimum free energy configuration. In a nutshell: icosahedron formation by particles is an emergent property during cluster formation, driven by thermodynamics rather than the quality of interactions among the particles but strongly dependent on their concentration.

You probably saw it already in Figure 2, but if not, please note that the boules studied by Wang et al. are completely filled. This spontaneous arrangement of the particles into icosahedrons gives no immediate clue as to how phage capsid proteins assemble into empty icosahedral phage heads, which are subsequently "stuffed" with phage DNA (here is an EM picture of DNA "stuffed" into a phage head). Is it sufficient that in an evolving phage head protein numerous weak, unspecific in­teraction sites are turned stepwise into a small set of specific interaction sites without loosing along the way the inherent proficiency to assemble into icosahedrons? We don't know yet. Yet, no one would leave a pétanque tournament after the first mène (round) as it is not possible to gather 13 points for winning a game that easily.