« Of Terms in Biology: Bacterial Fitness | Main | The Vicissitudes of a Talmudic Question »

Blown Out of Proportion – The Role of ppGpp
in Balanced Metabolism

Chocolate chip cookies are one of our guilty pleasures in the Levin Lab. They provide a satisfying, albeit unhealthy, avenue to celebrate success (or escape failure) in the lab. In addition to being warm, gooey, and delicious, a more practical attribute we appreciate is the scalability of the recipe: We can adjust the quantity of cookies we bake in proportion to our accomplishments or to the volume of ingredients in our kitchens without compromising the quality.

Scalability is also an important characteristic of single-celled organisms. As first described by Elio and his col­leagues, Salmonella and many other bacteria scale their size, ribosome number, and nucleotide content with nu­trient availability and growth rate. Importantly, key to proper function and viability of the cell, the proportions of each of the macromolecules remain relatively balan­ced with respect to one another. How do bacterial cells coordinate these diverse biosynthetic processes? Many achieve this through production of a small molecule called guanosine tetraphosphate and guanosine penta­phosphate – collectively referred to as ppGpp for short.

ppGpp: a global regulator of biosynthesis during cellular stress

Analogous to a bakery floor manager, ppGpp ensures balanced production of key macromolecu­les across environmental conditions. When faced with a shortage of a crucial ingredient, the floor manager must sacrifice maximal production for quality by correspondingly scaling down the vol­ume of the other ingredients, at least until stocks of the limiting ingredient are replenished. With­out this regulation, culinary or cellular catastrophe may ensue! (Figure 1). Likewise, during condi­tions of nutrient limitation or extracellular stress, ppGpp accumulates to high levels and modula­tes the activity of key biosynthetic pathways in a well-characterized process known as the strin­gent response. During the stringent response, ppGpp reprograms the cell into a semi-dormant state and reallocates resources from energy intensive processes (e.g. ribosome biogenesis and lipid metabolism) to those necessary for survival (e.g. nutrient acquisition), thereby increasing the odds the cell may survive until it reaches more favorable environmental conditions in which it can proliferate more rapidly. ppGpp mediates this transition through two distinct mechanisms: 1) transcriptional regulation of biosynthetic pathways and 2) direct interactions with target enzymes. Each of these modes of regulation is discussed in greater detail in the sections below.

Perhaps the earliest discovered and most well-studied function of ppGpp is to maintain cellular amino acid levels. During translation, it is essential that amino acids, specifically those present in charged tRNA, remain within normal concentrations. If any one amino acid is suddenly depleted and translation rates hold constant, the ribosomes will stall anytime codons for that amino acid are encountered. Ribosome stalling can increase the misincorporation rate into nascent poly­pep­tides, which can lead to nonfunctional – or even toxic – protein products.

During amino acid exhaustion in E. coli, a ribosome-associated ppGpp synthase, termed RelA, senses uncharged tRNAs in the A site of the ribosome and catalyzes production of ppGpp. ppGpp then interacts with RNA polymerase and reprograms transcription to increase expression of ami­no acid biosynthetic genes while simultaneously repressing the transcription of rRNA genes. This two-pronged approach allows the cell to decrease amino acid consumption while increasing ami­no acid anabolism until an appropriate balance is restored (reviewed here).

Transcriptomic studies indicate the transcriptional control is the predominant way ppGpp re-pro­grams global biosynthesis during the stringent response. However, ppGpp can also interact spe­cifically with target enzymes and influence their activity. Until recently, identification of the global repertoire of ppGpp-binding proteins was impractical due to the time burden associated with traditional kinetic assays. To overcome this barrier, two recent papers employed different high-throughput techniques to address this question in E. coli. In work from the Gerdes lab, the authors used a differential radial capillary action of ligand assay to measure the ability of radiolabeled ppGpp to bind individual proteins overexpressed in cell extracts. In a complementary study, the Laub lab synthesized a crosslink-able ppGpp analog, allowing identification of ppGpp-binding proteins by mass spectroscopy. Excitingly, both studies identified similar sets of ppGpp targets, including GTPases involved in translation (e.g. EF-Tu) and enzymes involved in purine biosynthesis (e.g. GuaB and PurF). Preliminary biochemical studies indicate that ppGpp acts as an inhibitor of these enzymes, illuminating an alternative and likely faster-acting mechanism through which ppGpp can inhibit translation and purine synthesis. This is consistent with work from the Wang and Gründling labs showing ppGpp-mediated inhibition of other small GTPases in Bacillus subtilis and Staphylcoccus aureus, respectively. It is tempting to speculate that enzymatic inactivation may be the first evolved function of ppGpp in bacteria. As ppGpp is chemically similar to GDP/GTP, it could immediately serve as a potent competitive inhibitor of these enzymes' native active sites. Once established as an enzymatic regulator, ppGpp-mediated regulation of transcription could evolve, increasing the breadth of pathways regulated by ppGpp.

Beyond the stress response: a role for ppGpp in homeostatic control 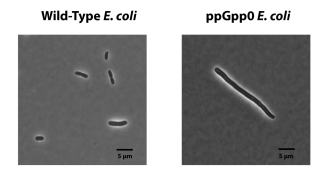 Even in a bakery replete with ingredients, mistakes hap­pen. Novice bakers may substitute baking powder for baking soda or over-mix the dough. The floor manager plays a vital role in catching and rectifying these errors to ensure bakery standards are maintained. In a similar fash­ion, basal levels of ppGpp are critical to cellular ho­meostasis independent of their role in the stringent response. E. coli ppGpp0 cells display hallmarks of meta­bolic dysregulation even in nutrient rich media. These mutants exhibit extreme heterogeneity in size, morpho­logy, and growth rate (Figure 2) and have heightened sensitivity to extracellular stressors, including antibiotic exposure. For example, ppGpp0 cells are prone to lysis in the presence of compounds that inhibit cell envelope biogenesis, which suggests unregulated cytoplasmic biosynthesis exceeding envelope carrying capacity. Moreover, cell divi­sion and DNA replication – processes typically tightly regulated to ensure each daughter cell in­herits a single copy of the chromosome – are dysregulated in ppGpp0 cells. For example, ppGpp0 cells replicate their chromosome multiple times without dividing, leading to filamentous, multi-nucleated cells.

At present, the source of dysregulated metabolism in ppGpp0 cells in the absence of extracellular stress remains unclear, but two factors may play a role. First, ppGpp0 cells may have a higher ba­sal rate of mutagenesis due to elevated replication-transcription conflicts and compromised DNA repair pathways or from the dysregulation of purine biosynthesis mentioned above. Secondly, in the absence of ppGpp, uncontrolled stochastic noise in biosynthetic processes may lead to unba­lanced metabolism and inefficient energy expenditure. With the development of new genetic tools to tune and monitor cellular ppGpp levels, our understanding of the contribution of basal ppGpp levels to bacterial physiology is poised for advancement in the coming years.

Properly proportioned bacteria, and cookies, are easily taken for granted; however, there’s often intricate regulation taking place behind the scenes. 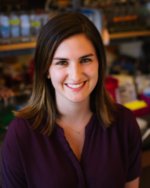 Elizabeth Mueller is a graduate student in microbiology in Dr. Petra Levin’s Lab at Washington University in St. Louis. 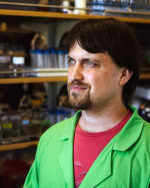 Corey Westfall is a  post-doctoral  scientist. While Corey re­ceived his Ph.D. in biochemistry studying plant enzymes, he now focuses on the interplay between microbial metabolism, physiology, and cell size