« The Vicissitudes of a Talmudic Question | Main | Fungomania 2. Hyphal Comings and Goings »

Anyone can freely claim bragging rights for their favorite topic, but with caution. In this light, the assertion that a mushroom growing in either Michigan or Oregon is both the largest and oldest living thing is questionable. You see, aspen trees grow from a single founder individual and re­main connected by their roots. Thus, a stand of them can be considered to be a single organism, weighting far more than any mushroom clone. The oldest known aspen stand covers 106 acres in Utah and is some 80,000 years old. It is known as 'The Pando' (for the Latin, 'I spread') and is cur­rently threatened by deer overgrazing on it. 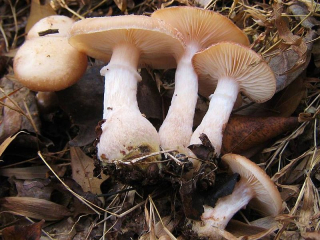 Even so, the claim for the largest mushroom is impres­sive. In 1992 researchers reported on a growth of a mush­room called Armillaria gallica covering some 90 acres of a forest in Michigan's Upper Peninsula. They estimated that it was over 100 tons in mass and some 1500 years old. How did they know? They collected in­dividual mushrooms of this species over the area and found that they were pretty much identical genetically. All these specimens shared the same multilocus genotype and mitochondrial type. How can this be? Remember that a mushroom is only the fruiting body of an organism composed of microscopic filaments (the hyphae, in the aggregate, the mycelium) that can spread underground over vast distances. So, if mushrooms pop up every so often, they may well be the offshoots of a single mycelial network living underground.

Actually, the position of being the largest mushroom was soon usurped by another one in Ore­gon's eastern Blue Mountains. This one covers three square miles and is probably over 8,000 years old, which makes it the current humongous-est fungus. A movie illustrates this story very well.

Members of the genus Armillaria are parasites of living trees, both conifers and angiosperms, causing damage that leads to the death of large forest stands. These mushrooms possess an array of plant cell wall-degrading enzymes. They have unusually large genomes, possibly to accommo­date these purported virulence factors. Unusual among mushrooms, their nuclei fuse soon after mating of haploid spores or hyphae. In most mushrooms, these nuclei remain separate as hete­rokaryons, to fuse only after they differentiate into mushroom – a matter not further discussed in this paper.

Otherwise, armillarias are edible and prized in various parts of the world, although opinions about their gustatory quality vary from place to place. They should be thoroughly cooked because when fresh or undercooked, they taste acrid. Caution is recommended, as some people have reported unpleasant reactions. They are known as 'honey mushrooms' for the usual color of their caps.

These fungi are particularly well suited for travels of adventure over wide territory. Armillarias (their name comes from the Latin armilla, or bracelet, for the ring around their stem) bunch their mycelia into structures called rhizomorphs ('root like shapes', also known as mycelial cords). These are aggregations of hyphal threads that look like black shoe laces, some as thick as 5 mm, some yards long and capable of anastomosing. Rhizomorphs are robust, which allows them to extend themselves in the ground at speed of some 1 – 3 feet a year, covering much greater distances than individual hyphae. Thus, rhizomorphs act as foraging agents to find new potential hosts. Combine this with the armillarias broad host range and extensive repertoire of hydrolytic enzymes, and you have a highly successful parasite. 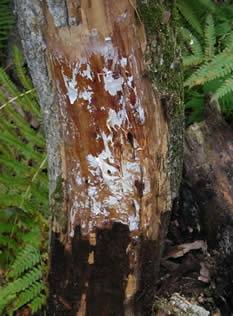 Twenty-five years after the discovery of the Michigan 'mushroomissimo', some of the original authors of the study returned to the site, armed this time with more powerful genetic and genomic tools. Their friend was still there but turned out to be about 4 times larger and per­haps half as old than measured originally.

Now for more detailed genetics, they found that, as ex­pected from the previous study, the individual mush­rooms were pretty much alike, with little indication that mutations has accumulated. Mutations happen, but at extremely low rates. The researchers determined the genetic makeup of 245 samples and studied the growth rates of rhizomorphs. Genetic sequencing of 15 samples also revealed that over time just 163 of its genome's 100 million bases have changed, mostly resulting in point mutations. A pittance! The authors figure that the mutation rate is around 10−10 per base per cell replication. With a genome of 100 mb, one mutation is expected every 50 cell divisions of A. gallica.

How do they think such a low mutation rate comes about? A fair amount of speculation had gone into this (for an earlier example, see here). In this paper, the authors present four possible sce­narios, which I will finesse here as they are available for perusal. In brief, two possibilities involve possible peculiarities of the rhizomorphs, another one, the acquisition of highly efficient repair mechanisms, and, the fourth one, an asymmetric partition of DNA strands leading to the retention of old DNA in the rhizomorphs. Any or all of these, plus the relative lack of mutagens in the forest, may explain the low rate of mutation. The authors enter fresh territory in their conclusion: "Our picture of clonal evolution in individuals of Armillaria closely parallels that in cancer progression within single individuals. Cancer progression, however, is accompanied by extreme genomic instability, not necessarily due to loss of function in DNA repair processes, but rather to loss of control over DNA replication. The rate of replication increases to the extent that fidelity suffers and DNA damage accumulates rapidly. Evolution in cancer occurs on a time span shorter than the lifespan of the individual affected. Evolution occurs similarly in Armillaria individuals, but over a span of centuries and millennia, and is characterized by extreme genomic stability. The genomic stability of Armillaria and the underlying mechanisms allowing such stability may provide a useful counterpoint to cancer. " Will someone in the cancer field pick this up?