Fungomania has returned… In keeping with what we did a year ago, we offer three consecutive fungal posts. This being the second one. 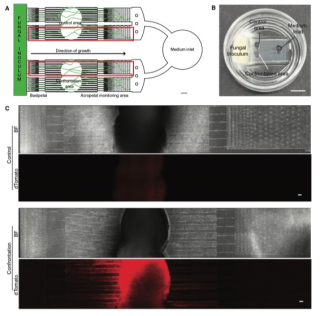 Figure 1. A Design of the fungal-nematode-in­teraction (FNI) microﬂuidic device. The scheme shows a two-dimensional overview of the mi­crochannel geometry used to accommodate the fungal hyphae, originating from the in­ocu­lum, and inlets used for the application of ne­matodes (confrontation area with parallel con­trol area) or solutes (medium inlet). The height of the microchannels within the entire device is 10 mm. Scale bar 500 mm. B Photo­graph of the FNI microﬂuidic device. In the ex­ample shown, the device was inoculated with C. cinerea on YMG agar and incubated for 18 hr at 37°C. Scale bar, 5 mm. C Tiled bright-ﬁeld and ﬂuorescent image of the control and confron­tation area of an FNI microﬂuidic device con­taining C. cinerea strain AmBm cgl2p-dTom 16 hr after co-inocu­lation with the fungivorous nematode A. avenae. Production of dTomato driven by the cgl2 pro­mo­ter was only visible in the confrontation, but not in the control area. Scale bars, 100 mm. BF, bright ﬁeld. Source. Frontispiece: Coprinopsis cinerea. Source

Until a few decades ago, mushrooms were thought of being some kind of plants. We now know that they be­long to their own kingdom, the Mycota (or: Fungi). They typically consist of caps and stems that arise from a mi­croscopic network residing underground or in rotting trees. But what makes them so intricate in shape? Not much is known about that. Basically, mushrooms and the network from which they develop consist of the myce­li­um, filaments that can be of considerable length and that vary in thickness. Because mycelia may be meters long, as in some mycorrhizal species, one suspects that there must be special mechanisms for the transport of nutri­ents, signaling molecules, or other compounds. Here, the authors of a recent paper studied the behavior of the my­­celium of a mushroom called Coprinopsis cinerea.

A word about this organism. It belongs to the inky caps, mushrooms with the ability to deliquesce their caps, turning its tissue into a dark fluid mess. C. cinerea is considered a model system for the study of basidiomy­cete fungi because of the ease with which it can be cultivated, transformed genetically, and for the nume­rous mutants that are already available. In particular, it's a great model for studying meiosis because it takes place synchronously within each mushroom cap. Edibility? It is edible but not worth searching for because it's small and readily turns into mush. Come to think of it, how many 'biological models' are worth eating?

The mycelia of mushrooms, both above and under the ground, are syncytial, that is, are made up of multinucle­ated hyphae that form a continuous communicating network. Being spread over a large area, different parts of the mycelium will certainly sense dif­ferent environments. One segment may be found in a place that is rich in nutrients, another one in a site that is fallow, yet another one where there are abundant predators, and so on. 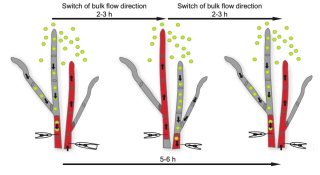 Figure 2. Model for Long-Distance Propagation of Gene Expression Patterns and the Distri­bu­tion of Nutrients within Trunk Hyphae of C. ci­nereal. Based on the data presented in this stu­dy, we propose that a distinct subset of hyphae (trunk hyphae) in the C. cinerea AmutBmut my­celium possesses the ability to alternate the di­rection of their cytoplasmic bulk mass ﬂow pe­riodically (every 2 – 3 hr). In the basipetal (from the base) ﬂow mode, the septa along the trunk hyphae, including the ones toward the bran­ches, are open to allow distribution of nutrients (2-NBDG) absorbed at the hyphal tips to sub­api­cal regions of the mycelium. Similarly, nema­to­de assault leads to the induction of defense ge­ne expression and the propagation of this ex­pres­sion pattern (most likely by bulk ﬂow trans­port of an internal signal molecule) in the basi­petal direction. In the acropetal (towards the base) ﬂow mode, the septa along the trunk hy­phae are open while the septa toward the branches are closed, channeling the propaga­tion of signals and the distribution of nutrients in the (acropetal) direction of hyphal growth. The underlying molecular mechanisms that govern this behavior are unknown. Arrows in­dicate the direction of ﬂow. Red ﬁlling repre­sents induction of cytoplasmic dTomato ex­pression in response to predation by nema­todes (indicated by a schematic representation of their heads and stylets), whereas green he­xa­gons within the hyphae represent nutrients (2-NBDG). Source

How the various sites communicate is puzzling. The authors of the paper probe into this question by making clever use of microfluidic devices and fluorescent probes. They presented the hyphae with either nutrients or com­pounds made in response to fungus eating nematodes and followed their distribution along the hyphae. What they saw is that transport occurred in both directions, from and to, what they consider the base. Fun is that the direction changes every 3 hours.

C. cinereal may have two visualizable properties, one from the effect of making toxic lectins that defend it against nematodes, on the other  by being endowed with a reporter gene that responds to a nutrient stand-in, a fluorescent glucose analog. The effects of both stimuli can be seen in real time in microfluidic chambers under a fluorescent microscope. As expected, most of the re­sponse will be local, at the site of the stimulus. However, some specialized hyphae, here called "trunk hyphae", carried either the anti-nematode defensive compounds or the glucose analog in both directions with respect to the base of the mycelium. Also involved is the proper opening and closing of septa along the filaments. The speed of propagation was the same in both directions, about 5 µm per second, which is much faster than that for the growth of the hyphae at their tip. The signals were also found in secondary branches of the hyphae via anastomosis.

In conclusion, the authors found an unexpected kind of differentiation in the hyphal structures that is involved in the bidirectional transport of cytoplasmic compounds. Bidirectional transport in fungi is not new (see, for exam­ple, here), but the use of specialized hyphae is. The os­cillations observed ensure and even distribution solutes throughout the mycelium even if the signal molecules are distributed unevenly in the environ­ment. Just how this happens is still not known but the opening of septa along the hyphae appears to be a major factor. Much remains to be found out, but for now we are left with the discovery of a novel differentiated system for transport of chemicals along the mycelium, which should be a step towards the understanding of differentiation in the mushrooms. As the authors say, “the next challenge will be to unravel the molecular mechanisms responsible for these phenomena.”