Fungomania has returned… In keeping with what we did a year ago, we offer three consecutive fungal posts. This being the the third and last one. 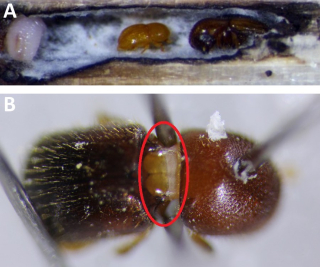 Figure 1. A Tunnel in a tree with a larva, an ad­ult male, and an adult female (left to right) of Xylosandrus germanicus. The fungus is the white layer covering the tunnel wall. Source. B Mycan­gium of the ambrosia beetle Xylosandrus cras­siusculus (frontispiece). Source

Alcohol and farming do not often go together, unless you think of beetles. In certain species, ethanol is used to in­crease the fruit of their labor, which sounds good but re­quires an explanation. Long before humans engaged in agriculture, ants, termites, and beetles evolved the ability to grow fungi as their major foodstuff. They did this in style, perfecting their technique to include preparing the "soil", choosing the desired cultivars, fertilizing the site, pruning unwanted material, and carrying "seeds" when traveling to a new site.

Fungus farming arose in ants, termites, and beetles be­tween 40 ‒ 100 million years before humans began do­mesticating plants for agriculture. This lifestyle evolved only once in ants and termites but originated more than 10 times in the ambrosia beetles. So, what are ambrosia beetles? These are a kind of weevils that, like leaf-cutting ants and termites, seem to live exclusively by eating the fungi they cultivate. They have a wide geographic distribution. These beetles excavate tunnels into dead or dying trees where they ex­tract nutrients from the tree's xylem, which is used by the fungi for their growth (Figure 1A). This foodstuff, once concentrated, is called ambrosia (otherwise, the name for a fragrant food for the gods), hence the name given to these beetles. Ambrosia fungi grow readily on this material, mak­ing up what is known as fungus gardens, which are eaten by the beetles. Before leaving their tree to find a new one, the beetles scoop up masses or fungal spores and place them in a dedicated organ called the mycangium (Figure 1B). This ensures both vertical transmission to young beetles and the seeding of the fungi at new sites. The ambrosia fungi seem to be totally dependent on this arrangement because they are not found elsewhere.

Figure 2. A + B Relationship between ethanol in­corporated into a sawdust-based agar substra­te at 0%, 0.1%, 0.5%, 1%, 2.5%, or 5% (vol/vol) and the presence of A larvae and B pupae of X. germanus, an ethanol-responsive ambrosia beetle. Data points represent mean values of larvae or pupae per tube as a function of etha­nol percent. C White ambrosia garden of A. grosmanniae within the artificial rearing sub­strate. Source

There is a problem, however, for the beetles in that other fungi picked up from the environment may contaminate the tunnels and interfere with the growth of the ambro­sia fungal gardens. How to solve this problem? Enter ethanol, which is an attractant for ambrosia beetles, and which is made in trees that are decomposing. In an ex­periment, infusing ethanol in one end of a dying tree trunk results in attracting four times as many ambrosia beetles than in the untreated end. Conveniently, ethanol appears to selectively inhibit the unwanted fungi, which is the point of a recent paper.

In the experiments described in the paper, ethanol, up to 5%, significantly increased the colonization of dogwoods and redbuds by ambrosia beetles. The production of the beetles' offspring was also increased when ethanol was present, the maximum rate being elicited by 2% ethanol. Growth on agar of two species of the fungal genus Ambrosiella was increased slightly by that concentration of ethanol as well, whereas that of the potential contaminants, As­pergillus and Penicillum, was notably decreased. Note this is similar strategy is seen in the leaf cut­ting ants, which manufacture an antibiotic that acts selectively against undesired fungal species – a true weed killer. 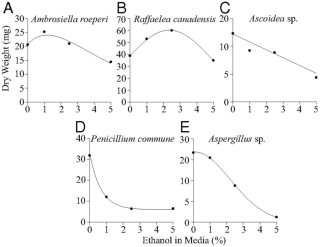 Figure 3. Agar plate bioassays of the effects of ethanol incorporated into the medium at con­centrations of 0%, 1%, 2.5%, or 5% (vol/vol) on the growth of A A. roeperi and B R. canadensis, fungal symbionts of the ethanol-responsive am­brosia beetles X. crassiusculus and X. saxesenii, respectively. C–E: Growth of C A. hylecoeti, the fungal symbiont of a ship-timber beetle, and fungal competitors of the symbionts including D Penicillium sp. and E Aspergillus sp.. Source

The authors also determined the level of alcohol dehy­drogenase in various fungi and found significantly higher levels in the ambrosia fungi then in the contaminants, which goes a way towards explaining why ethanol has its selective effect. But since the maximum effects are seen at a concentration corresponding to that of weak beer, ambrosia beetles hardly get soused. But thanks to al­co­hol, these insects select the partner they desire in order to become successful farming. Skål!