« Blown Out of Proportion – The Role of ppGpp in Balanced Metabolism | Main | Fungomania 1. Who's The Biggest? »

The Vicissitudes of a Talmudic Question 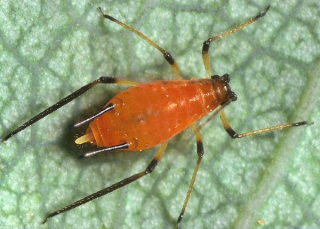 Aphid on a Leaf. Source

When we try to construct a Talmudic Question, we are concerned with the accuracy of the premise and ensuring that an answer has not been previously provided. We were toying with this one: “Bacterial endosymbionts of insects have reduced genomes but, best we know, they have not exported some of their genes to the host cell nucleus (as organelles have). If this is indeed true, what is the reason for it?” But we were not sure of the premise, so we thought it wise to consult with an expert, John McCutcheon, of the University of Montana. Here is what he said:

“Endosymbionts do seem to have transferred genes, but rarely. In some cases, there are transfers that seem to have come from the endosymbionts (but this is quite difficult to prove, although the phylogenetic trees suggest it’s true or at least possible). In the vast majority of cases, however, the genes transferred to insect host genomes are from other bacteria, in particular the reproductive manipulators such as Wolbachia.

But these HGTs arising from reproductive manipulators still complement missing endosymbiont genes, so I see this as basically the same outcome, achieved through a slightly different process. These transfers still enable some aspects of genome reduction, but the genes happen to come from other sources because other sources have more opportunity to transfer genes. So, at least in my head, this is an interesting problem, but perhaps not a Talmudic one… because it’s solved!

The other thing that seems to be going on in many endosymbioses is that native host genes are taking over some of the functions of the missing endosymbiont genes. This seems to be true in many insect-endosymbiont systems, and it also is true in other host-endosymbiont systems such as the amoeba Paulinella. So, to sum up, it seems that many (non-organelle) endosymbionts can have such small genomes through (i) HGT from various sources and (ii) functional takeover from the host.”

However, John thought later that it wasn’t quite so simple. He wrote: “Well, just to be clear, this is a problem that is solved in *my* head (although the mechanisms are almost completely unsolved!), but I do think that some people might not know this. So maybe it’s still an interesting thing to dis­cuss on the blog.” We follow his advice.