My Two Years in Copenhagen…

My two years in Copenhagen were most likely the happiest of my life. My then wife and I were there in 1956 to 1958, while on a postdoctoral fellowship in Ole Maaløe's laboratory. We had de­ci­ded on this for several reasons. In the decades after World War II, young Americans were drawn to labs in Europe, partly because some of them were the birthplace of Molecular Biology, partly for the excitement of being abroad. In my case, I was further pushed in that direction by my wife, who in college had taken a course entitled "Scandinavian civilization". She had proceeded to fall in love both with the subject matter and with the professor who taught it. The clincher was that the Maa­løe lab had just published a tantalizing article on synchronous division in bacteria, a subject that I was drawn to. So, I applied, was accepted, and was awarded a fellowship from the American Can­cer Society. 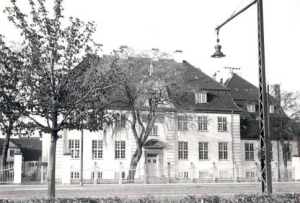 Ole's lab at the time was at the State Serum Institute in Amager. That was before he became prof. of microbio­logy at University of Copenhagen. The lab's factotum, the indispensable Jens Ole Rost­ock, found us a lovely apart­ment in Frederiksberg. We soon bought two big old black bicycles at the Police auction and were ready to go, to liver som Danskere (live like Danes). Our hyggelig (com­for­table, in a special Danish sense) apartment soon had the 3 required B's, Billeder, Bøger og Blom­ster (pictures, books, and flowers). I bicycled to work every day, rain or snow, taking much pleasure in traversing the Tivoli Gardens.

The lab was quite small, with just Niels Ole Kjeldgaard, plus a German postdoc and me, so we had Ole's nearly undivided attention. He would occasionally participate in an experiment, elegantly re­moving the ever-present cigar from his mouth, and carefully placing it down while reaching for a pipette. The work went well, practically from the beginning. We had the routine of starting a cul­ture in the evening and using it as an inoculum as soon as we got in the next morning. We spent the morning analyzing the data from the day before and, after lunch, were ready for a new expe­riment. The story is told in detail elsewhere. Let me recount a few personal vignettes.

We were producing lots of data and would probably have been overwhelmed by it had not Ole dis­played a magnificent ability to digest them and to place them within a useful framework. Thanks to him, we felt that we knew what we were doing, both with regard to what the next experiments should be and how they related to the wider world. Ole, being one of the members of the original phage group, was eminently qualified to recognize the implications of our results.

Lunch at the Serum Institute was at the Laegernes Frokostue (the doctors' lunch room), where I usu­ally had an ost smørrebrød med spejlaeg paa (open faced cheese sandwich topped by a fried egg). The place was fairly quiet, as everybody was quite intent in eating. One day, this was interrupted by an Englishman, who said: "Surely, if you could get your nutrition from a pill, you would prefer that eating." So astounded were the people in attendance, that they dropped their knives and forks. Overall, friendliness and comradery pervaded the atmosphere. It was exceptionally smooth. But one day the Queen came to visit the Institute. Because one of the group was an avowed leftist, he was told to please take a day's vacation on that occasion.

It is not possible to live in Denmark for any length of time without admiring the ability that its peo­ple have to care for one another. We came from a country where a prevailing attitude was that people ought to be rugged individuals and be largely responsibility for their own fate. What we saw here was a developed sense that everyone's well-being is everyone's concern. If someone is not successful in life, the question is not who is to blame, but rather, how can he or she be helped. No wonder that Der er en yindigt land (There is a lovely country, from the Danish anthem).