Risks and benefits of workouts while fasting (part 2)

You may wonder whether the 'oligotrophic growth state' of Bacillus subtilis – the subject of part 1 – isn't just the capriole of a domesticated bacterium in the lab, and not of much relevance "in the wild." But, as you will soon see, it probably is relevant in natural settings. But first I have to go back in time to pick up the thread. Roughly 30 years ago, some microbiologists put their microscopes and Petri dishes aside and started sequencing environmental samples rather than trying to culti­va­te the microbes therein. Since then, virtually all such metagenomic studies found that, regard­less of the habitat under scrutiny, "a relatively small number of different populations dominate all samples, but thousands of low-abun­dance populations account for most of the observed phylogenetic diversity," as Sogin et al. put it. The same authors proposed to call these "...thousands of low-abun­dance populations" the 'rare biosphere', a term which has stuck despite some dispute to which extent the sheer numbers were in part due to technical flaws (see here and here). Yet, ecologists studying a particular microbiome aren't usually satisfied with knowing "who's there?" but rather want to know "who's busy, who's just chilling, 'dormant', or even dead already?" Answers to the latter questions can come from analyzing genes for their transcriptional activity, that is, by taking the step from metagenomics to metatranscriptomics (as a native speaker of German, this term makes me smile since English speakers frequently make fun of these looong compound nouns for which the German language is infamous, rightly so). As it turned out, 'rare biosphere' species can have an over-proportional role in biogeochemical cycles and may be even hidden drivers of microbiome function. For an example, I will dive into a recently published paper with the telling title "Long-Term Transcriptional Activity at Zero Growth of a Cosmopolitan Rare Biosphere Member" by a team of researchers at the Centre for Microbiology and Environmental Systems Science (DOME) at the University of Vienna, Austria, and Michael Pester, who is now at the DSMZ (an institution with a similar scope as the ATCC). 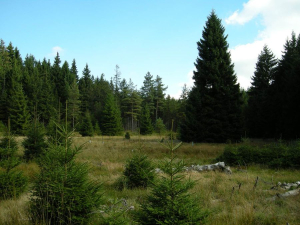 Peatlands contain up to one-third of the pool of soil car­bon on planet Earth and are thought to contribute 10 – 20% of the global emission of the greenhouse gas CH4 (me­tha­ne), a percentage on par with that of the rice pad­dies worldwide. Although regarded as a primarily metha­no­genic environment, dissimilatory sulfate reduction con­tributes up to 36% of carbon mineralization in these ecosystems, depending on sulfate deposition by rain or groundwater. The minerotrophic Schlöppnerbrunnen fen, which was used as a model habitat for peatlands in these studies, is situated in the Fichtelgebirge Mountains in northeastern Bavaria, Germany (Figure 1). The soil cha­racteristics at this site are, briefly, pH typically at 4 – 5, and sulfate concentrations varying from 20 to 240 mM. Standing pools of lactate, acetate and formate are mostly in the lower µM range up to 190 µM but can reach peak concentrations of 3.2 mM (acetate) and 1.4 mM (formate). Propionate is only oc­ca­sionally detectable but can reach peak concentrations of 1.6 mM.

In an earlier study, the researchers had performed a survey of the sulfate-reducing members of the 'peatland community', and found that a Desulfosporosinus species (Firmicutes, Clostridia), which constitutes only 0.006% of the total microbial community 16S rRNA genes, is an important sulfate reducer in this community. They could pinpoint Desulfosporosinus by two approaches. First, they obtained qPCR (quantitative real-time PCR) signals with Desulfosporosinus-targeted 16S rRNA primers in samples from stable isotope probing (SIP) experiments. (SIP, in brief: letting cells grow with and without added sulfate on a 13C-labeled substrate mixture, fractionation of the extracted DNA by gradient centrifugation, qPCR for the 'heaviest' fractions.) Second, qPCR for the 'heaviest' fractions of their SIP probes with dsrAB-specific primers identified no additional sulfate reducers (the dsrAB genes encode subunits A and B of the dissimilatory (bi)sulfite reductase, the 'signature genes' of sulfate reducers). They estimated for the identified Desulfosporosinus species a sulfate reduction rate of up to 341 fmol SO4 per cell and per day. That's not bad! The minute Desulfospo­rosinus population has apparently the potential to reduce sulfate in situ at a rate of 4.0 – 36.8 nmol per gram soil per day, sufficient to account for a considerable part of sulfate reduction in the peat soil. 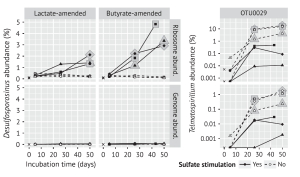 Figure 2. Temporal changes in relative riboso­me and genome abundance of the most abu­ndant Desulfosporosinus OTU0051 (left) and the most abun­dant Alphaproteobacterium, Telma­tospirillum OTU0029 (right) in incubations with different substrates (Desulfosporosinus: lactate, butyrate (not shown: formate, acetate, propio­nate); Telmatospirillum: butyrate). Solid lines and symbols depict sulfate-stimulated micro­cosms, whereas dashed lines and open sym­bols depict controls without additional sulfate. Diagonal crosses depict the abundance in the native soil, which was sampled from parallel peat soil subsamples and plotted at day 0 in all panels. Halos around symbols indicate signifi­cantly higher abundance in the sulfate-stimu­la­ted microcosms as compared with their respec­tive controls and day 5. Source

In a subsequent study, the researchers sought to "get clo­ser" to the sulfate-reducing bacteria, especially to De­sulfosporosinus. To this end, and because this bacterium resists cultivation so far, they turned to growth of the mi­crobial 'peat soil community' under controlled conditions in so-called "microcosms". (Please note: if you're not par­ticularly interested in the details of the experimental set­up you may skip to the next paragraph.) The re­search­ers mixed 30 g fresh, non-homogenized peat soil and 60 ml of filter-sterilized peat water in 250 ml glass bottles, which they sealed under N2. These "low-tech" micro­cosms, set up in triplicate, were supplemented at day 1, and periodically thereafter, with of 100 – 200 μM for­ma­te, acetate, propionate, lactate or butyrate – typical or­ga­nic carbon degradation intermediates in peatlands – and, as control, without added substrate. They incubated the microcosms for 53 days in the dark at 14 °C, thus mimick­ing the situation at the sample site as closely as possible. To also artificially create a 'sulfate reduction hot spot' in the peat known from earlier studies, half of the substra­te-amended and -unamended microcosms were 'spiked' with sulfate to a final concentration of 190 – 387 μM, and, thereafter, periodically with smaller amounts equivalent to 79 – 161 μM. There were 36 microcosms altogether, a veritable flock, and they probably blocked all available incubators in their institute for a while. They monitored CO2, CH4, sulfate, and substrate concentrations every 4 days to obtain values for the substrate-specific sulfate turnover rates (much like biotechnologists monitor their fermenters), and took samples for total nucleic acid extractions (DNA and RNA) at days 5, 26 and 50.

Hausmann et al. compared relative genome abundance (16S rRNA gene abundance as proxy for microbial growth) and relative protein-synthesis potential (16S rRNA cDNA abundance as proxy for ribosome abundance). They found that none of the abundant OTUs (Acidobacteria, Alphapro­teo­bac­teria, Actinobacteria and Planctomycetes) was stimulated by sulfate in any of the treatments. In contrast, 18 low-abundance OTUs responded positively (P-value >0.05) to either sulfate-stimu­la­ted or -unstimulated conditions under different substrate scenarios. Among these low-abundance OTUs, the genus Telmatospirillum OTU0029 (Alphaproteobacteria) dominated the response to bu­tyrate without sulfate amendment, and clearly "behaved" different from Desulfosporosinus (Figure 2, right). In fact, members of the genus Desulfosporosinus were the major responders to the addi­tion of sulfate plus substrate at the ribosome level but apparently did not grow: qPCR analysis confirmed that the ribosome/genome ratio of Desulfosporosinus increased from 2,600 – 7,300 to 57,000 – 84,000 during the incubation in sulfate-stimulated microcosms supplemented with pro­pio­nate, lactate or butyrate (Figure 2, left). Such high cellular ribosome contents are known for ex­ponentially growing E. coli but had so far not been observed in low-abundance microorganisms keeping a steady population size.

The authors felt safe to conclude that their results "indicate that rare peatland Desulfosporosinus species (i) maintain a stable, low-abundance population in the studied peatland and (ii) respond to fa­vorable environmental conditions first by increasing their ribosome content and metabolic activity and only after prolonged time by growth." Indeed, Desulfosporosinus species contain 8 – 10 riboso­mal operons (rrn) in their genomes, which would enable them to react very quickly to favorable con­di­tions with an increase in ribosomes per cell. Such a strategy could well make sense in the highly fluctuating conditions of peatlands, in space and time. 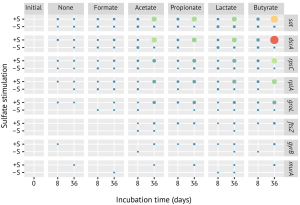 In their recent study now, Hausmann et al. have assem­bled the genome of 'Candidatus Desulfosporosinus in­frequens' ('Candidatus' because it has not been cultiva­ted) by co-assembly and differential coverage binning of Desulfosporosinus sp. MAG SbF1 metagenomes obtained from native peat soil (see here for 'binning'). The genome has a size of 5.3 Mbp (42.6% G+C, 3.9% residual conta­mi­na­tion) and potentially codes for 6,440 proteins, 59 tRNA and 37 other ncRNAs, and 7 rRNA operons. As they as­sembled the genome from metagenomic data they es­timate that it represents several lineages (10% strain he­terogeneity). Genome size and G+C content are in the same range as those of cultured Desulfosporosinus spe­cies (3.0 to 5.9 Mbp, 42 to 44% G+C). Since they made a transcriptomic analysis in parallel to the genome as­sem­bly, they could reconstruct major metabolic pathways (glycolysis, TCA cycle, energy metabolism, sulfate reduc­tion pathway) and "read" their activity in Desulfosporo­sinus in the native peat soil (see here, it actually looks like an excerpt from the famous 'Boehringer pathways' chart, which is still available online and easily navigable, bon vo­yage!). Genes whose products are required for dissimilatory sulfate reduction (sat, dsrAB) were overexpressed upon sulfate stimulation, genes for ribosomal proteins (rplA, rpsC) and chaperones (groES/groEL, dnaK, clpP) were also overexpressed but not as strongly as the former (Figure 3). No or only marginal overexpression was found for replication genes (gyrB, dnaC, dnaG), cell division genes (ftsZ, minE), and cell envelope genes (murABCDEFGI). These findings confirmed that Desulfo­spo­rosinus is capable of 'workouts while fasting' when nudged by sulfate, but does not have much of an appetite for cell growth and propagation under these conditions. Hausmann et al. consi­der­ed the possibility that Desulfosporosinus survives in the peat soil at roughly constant cell numbers by recurring sporulation-germination cycles that would keep the genome numbers constant. Yet, since they could not detect any significant activity of sporulation genes (spo0A to spoVT, with the only exception of spoIIIAD) they think this scenario is unlikely.

They had observed a moderate increase in Desulfosporosinus genome abundances in independent microcosm experiments lasting for 73 and 120 days, respectively (not mentioned above). They as­sume that Desulfosporosinus populations "in the wild" may experience periods of favorable condi­tions, as in their microcosm incubations, that would result first in activity at zero growth to coun­ter­act pH stress (SO42– !) – the overexpression of chaperones points to this – and, if they were to last long enough, eventually also during growth. This is not so far from the ''oligotrophic growth state'' of B. subtilis (see part 1), maybe without the "necrotrophic" aspect.