The Complex and Mysterious Red Queen 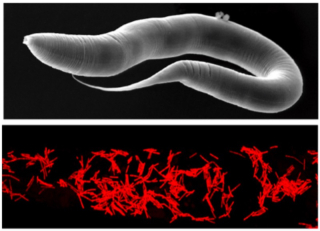 The Red Queen of Lewis Carroll's Through the Looking Glass is a prominent figure among evolutionary biolo­gists. Her line to Alice, "‘Now, here, you see, it takes all the running you can do to keep in the same place" struck the biologist Leigh Van Valen as an apt metaphor for the need for species to constantly adapt to the changing en­vironment in order to survive. This process is starkly il­lustrated in interactions between pathogens and their hosts, where survival of each party depends on its on­going ability to counter the other's latest foil.  But patho­gens typically have high mutation rates, while their hosts are often sluggishly evolving complex, multicellular eu­karyotes like us. How does access to differing pools of va­riation affect the evolutionary back-and-forth between such pairs of species? A group of research­ers set out to better understand the underlying evolutionary dynamics as worms and their bacte­rial pathogens (Fig. 1) adapt to one another in controlled experiments. Meet the protagonists, or rather, the mutual antagonists:

Bacillus thuringiensis is a bacterium that lives in soil and is best known for its importance in gene­ti­cally modified crops. It produces a toxin in the form of a crystal protein that kills some insects by binding to the inner wall of the gut, causing it to break down. The toxin gene has been engineered into various crops to protect them from damage by killing off insect larvae that feed on them. In our story, B. thuringiensis plays the role of "the pathogen".

The roundworm Caenorhabditis elegans is a popular model organism in labs – it has approximately the same number of genes as us, but consists of only about 1000 cells. Given a lawn of bacteria on a petri dish, each worm can produce several hundred offspring during its short life cycle, which is about one week from freshly hatched larva to adult worm to death. C. elegans is susceptible to the toxin produced by B. thuringiensis, making it well suited for its role here as, "the host".

The first round of this pathogen-host rumble starts with a genetically diverse population of ~3000 new worm larva (Fig. 2). After 5 days, when the larva are at the young ad­ult stage, they are exposed to a clonal strain of the pa­tho­gen. While dealing with the pathogen, the worms lay eggs. The eggs are transferred to a fresh plate to produce a new larval population, which in turn is allowed to grow to the young adult stage. In the meantime, the bacteria that had infected the worms that laid the eggs are har­vested and added to the young adults of the second generation. See how that works? The patho­gen used on the second generation has already gone through a round of adaptation to the host, and in turn, the new hosts are the progeny of a generation that was contending with the patho­gen. They repeat this protocol through 23 worm generations, preserving samples from worms and bacteria at each transfer (Fig. 2).

The first thing they found was that all this rumbling increased fitness in both the host and patho­gen. How did they determine this? For the host, fitness is measured in the number of eggs laid, since this is a function that is directly affected by the pathogen. When worms from different time points were exposed to the ancestral pathogen, those that had coevolved with the pathogen laid more eggs than worms from a control set that had been transferred without the pathogen pre­sent. And worms from later transfers laid more eggs than those from earlier transfers. For the bacteria, fitness (see here for a treatment of the term) was measured by the ability to replicate inside the host in the following manner: a worm was infected with a labeled ancestral bacteria clone plus an evolved bacterial line and the bacteria competed for one infection cycle. Who do you think won? As in the worm experiment, the coevolved bacteria outcompeted the ancestral bac­te­ria across timepoints, whereas the unadapted control bacteria did not, telling us that each party adapted to the presence of the other as the experiment progressed. 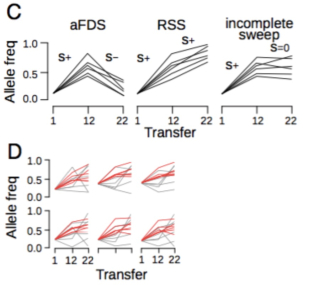 But were hosts and pathogens adapting generally to the others' presence, or specifically to the particular host or bacterial pool at each round?  Since the object of the ex­periments was to uncover the evolutionary dynamics involved, let's pause to consider how these two different scenarios might look at the genomic level, according to the researchers (Fig. 3C).

If the hosts and pathogens were adapting to one anoth­er's presence in general, the researchers expected to see signs of recurrent selective sweeps (RSS). That is, in the case of worms exposed to the bacteria, particular bene­fi­cial mutations would increase in frequency, sweeping through the population and reducing the overall pool of genetic variation. Since each new round of adaptation has to start with the "swept" population from the previ­ous round, RSS can be thought of as rather constrained by its history. The populations don't quite have the genetic agility to adapt specifically to the cur­rent bacterial pathogen, but are adapted generally to the presence of the pathogen from previous rounds.

In contrast, if the worms were adapting specifically to each round of bacteria, and vice versa, the researchers expected to see signals of "antagonistic frequency-dependent selection" (aFDS). In aFDS, natural selection samples from the pool of diversity in the population. For example, the data for each worm population contain >370,000 sites that can vary between two alleles.  Each time a population adapts to its current pathogen, subsets of these alleles should increase or decrease in frequency as needed, possibly reversing the direction of selection in the next round of adaptation. In contrast to the historical constraint imposed by RSS, where genetic diversity is reduced with subsequent sweeps, aFDS allows the population more leeway to "feint and parry", continually sampling from the genetic diversity to fashion a response to the current pathogen.

To test for specific, reciprocal adaptation, they carried out "time-shift" experiments that call to mind Ebenezer Scrooge and his interactions with the spirits of Christmas past, future, and yet to come.  They took worm populations from the tenth transfer and pitted them against bacteria from three timepoints: transfers 1, 10, and 23; in other words, the "spirits of pathogens" past, present, and future. RSS should result in worms from later timepoints being better adapted to earlier than current pathogens. However, among the 16 worm populations tested this way, 'twas the Spirit of Pathogens Present that had the strongest negative effect on egg laying. Then they performed the complementary experiment, taking bacteria from transfer 10 and infecting worms from early, mid, and late timepoints. The bacteria fared the poorest when infecting their contemporary antago­nists – the worms from the tenth transfer. It appeared that the hosts and pathogens were adapt­ing rapidly and and reciprocally to their contemporary antagonist-of-the-day, suggesting that aFDS dominates the evolutionary regime. Ah, but the sequencing data showed that they had under-es­timated the Red Queen's complex ways.

Comparing genome sequences from worm populations from early, mid, and late timepoints, they sought alleles that had significantly increased or decreased in frequency within the adapted popu­lations but not the control popu­lations. The amount of increase or decrease allowed estimates of the selection coefficients. This variable expresses the fitness change that accompanies a mutation, with the value being either positive or negative, indicating that the situation the worm was in (in this case, exposure to the pathogen) either favored or disfavored the allele. A region that jumped out was a long stretch of worm chromosome III, with hundreds of SNPs (sites where a single nuc­leotide varies) that had undergone selection during the first half of the experiment (transfers 1 – 12). Now, if the aFDS dynamic were at play – feint and parry – then the sign of the selection coef­ficient at any allele involved in adapting would be likely to change between the first and se­cond halves of the experiment. They found instead that 1) fewer alleles were under selection in the se­cond half compared with the first, and 2) most of these alleles kept the same sign (Fig. 3D). This pattern was found in other regions of the genomes of adapting worms, as well, poking holes in support for aFDS dynamics, and prompting the researchers to consider other hypotheses.

If not aFDS, then what? Perhaps the populations had gone off on such different trajectories that few of the same alleles were being acted upon as the experiment progressed. Instead, the selec­tion signals among the disparate alleles were lost in the background noise, indistinguishable from genetic drift, yet producing at the phenotypic level an aFDS pattern of adaptation. Also, what looks like a raft of sites under selection may be due to only a few sites actually undergoing selection, with the others just along for the ride (genetically linked). The clutch of selected sites from chro­mo­some III, for example, appears in the middle of the chromosome, where recombination rates are low, resulting in high genetic linkage. Or perhaps the pattern they see is produced by a series of incomplete sweeps occurring at various loci. Further complicating matters is the fact that worm fertility is known to be a quantitative trait: controlled by multiple, small-effect loci that may be spread among various chromosomes. "Curiouser and curiouser!” cried Alice. 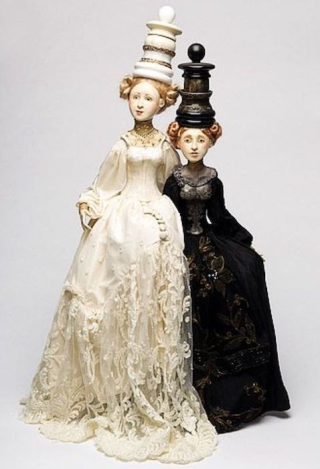 To stop your head from spinning, here is one nice, clear finding: plasmid copy number changes played a key role in the adaptation of the bacteria to their hosts during the time-shift experiments. In the co­evolved bacteria they found an increase in copies of a plasmid containing a gene for a gut-binding protein toxin that punches holes in the worm gut. The plasmid's highest levels in the co­evolved population, moreover, corresponded to points at which the worms had their lowest fertility. This same plasmid decreased over transfers in the control popu­la­tion – the bacteria that lost this unneeded baggage fared better. Interestingly, after increasing during the first half of the experiment in the coevolved bacteria, the plasmid returned to its original copy number at later timepoints, indicating its value in allowing the bacteria to quickly establish a toehold while other mutations arose to pro­duce a more finessed response.

How do these findings compare to those of previous studies? While several variations on the theme of reci­procal adaptation have been examined, the only study that looked at changes across time in both antagonists did so using bacteria and their phages. In that case, RSS dynamics dominated at first, and then aFDS took over. Other than that, it appears there are nearly as many adaptive patterns as there are experiments performed. It turns out that the Red Queen is not simply running blindly in one direction to stay in place. Like her White Queen and Black Queen sisters (Fig. 4), she has multiple moves at her disposal as she navigates the chessboard of adaptation. Understanding her will re­quire patience and an appreciation of her complex ways.