The Pyrenoid – Not Your Average Cookie-Cutter Organelle Figure 1. Electron micrograph of a Chlamydomonas pyrenoid (in blue) within a chloroplast (in green). Source

The chloroplast is the chocolate chip cookie of the car­bon-fixing, photosynthesizing world: it's a reliable, tra­ditional, well-known staple. Lesser known is the more mysterious shape-shifting organelle called the pyrenoid. This organelle is the unsung hero of the photosynthesiz­ing world, performing approximately 30% to 40% of glo­bal carbon fixation despite its non-household-name sta­tus. It enhances carbon fixation by the classic carbon-fixing enzyme RuBisCO, which it accomplishes by raising intracellular CO2 concentration up to 180 times, reducing Rubisco's negative oxygenase activity, and helping to by­pass the issue of limited CO2 availability in aquatic condi­tions.

Be prepared for surprises. The pyre­noid is a membrane-less, proteinaceous organelle, often loca­ted inside the chloroplast in algae species and hornworts. What defines it as a separate body is a phase transition between it and its surroundings (for examples of phase transition in hydrophilic systems, see here). Not being bound by a membrane, it's not locked into a solid form in the way a mitochondrion is. Rather, it is a microscopic shape-shifter. Much like the colorful globules inside of lava lamps, pyrenoids are dynamic, breaking apart and then coalescing. One "lava lamp blob" can split, shmoo-like, in order to form two new fully-functional pyrenoids. Otherwise, pyrenoids can be formed from scratch. It is known that 90% of the dynamo organelle's matrix is Rubisco, held to­gether by the "glue" protein EPYC1 (Essential Pyrenoid Component 1), and the remaining 10% is a handful of proteins that are poorly understood but are currently being investigated (more on that later). But pyrenoids are not completely lacking in structure: an internal lipid membrane weaves through the matrix, and the whole conglomerate is surrounded by a sheath of starch. 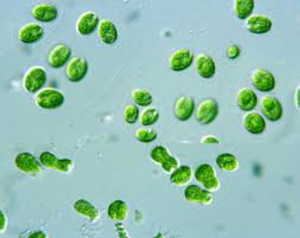 The unique liquid lava-lamp-esque nature of the pyre­noid was first identified by the Jonikas group at Princeton University, published in a 2017 paper that demonstrates that the organelle lacks a rigid crystalline structure and instead behaves more like a liquid. The group performed a fluorescence recovery after photobleaching (FRAP) ex­periment and discovered that, indeed like a liquid, the Chlamydomonas pyrenoid matrix undergoes internal mix­ing when triggered by cell division and high CO2 levels. The dividing pyrenoid also behaves like a liquid. Imagine a drop of water detaching from the rim of a faucet: like a droplet of water breaking off, the dividing pyrenoid stret­ches and forms a narrow "bridge" before splitting into two, whereupon the two halves immediately bounce back into a spherical shape.

The organelle has a research origin story as intriguing as itself. It was first observed in 1803 – even before the discovery of the mitochondrion in 1890 and of the chloroplast in 1905 – by a Swiss Pro­testant pastor who happened to have a keen interest in algae. Research on its structure and func­tion only began to progress significantly after an uptick in interest in the 1970s. Fascinating quest­ions lie in what exactly the pyrenoid does and why – which may help explain how the strange or­ganelle moves in the liquid way it does.

(click to enlarge) Figure 3. The FRAP experiment that confirmed that the pyrenoid matrix exhibits liquid behavior. Above is a live pyrenoid, which displays internal mixing. This is in contrast to the fixed control pyrenoid below, which does not mix internally. Source

In addition to serving as a site of CO2 fixation, the pyre­noid serves as a general metabolic hub for the algal cell. This was further explored in the 2018 paper by Zhan et al., a collaboration between labs from the Canadian Uni­versity of Guelph and the French Sorbonne that aimed to elucidate functions of the pyrenoid by investigating its individual proteins. The group performed proteomic stu­dies on the Chlamydomonas pyrenoid via mass spectro­me­try and discovered that it is composed of 190 distinct proteins. Many of these proteins are involved in funct­ions already known to be carried out by the pyrenoid, like carbon fixation, but the group also uncovered surprise proteins implicated in unexpected funct­ions such as chlorophyll synthesis and amino acid metabolism. By identifying proteins directly responsible for starch biosynthesis and degradation, this study also found the first piece of direct evidence that starch biosynthesis occurs in the pyrenoid, confirming a long-standing hypothesis. Perhaps an in­teresting way to verify this and uncover additional pyrenoid functions in cell metabolism will be to knock out key pyrenoid genes that disable the organelle, then observing impacted gene expres­sion via qPCR.

The question then arises: why would pyrenoids develop in the cuthroat bottleneck of evolutionary processes in the first place? Because pyrenoids increase carbon-fixation efficiency, some believe that they must have evolved during periods of low atmospheric CO2 levels as a survival mecha­nism. Dr. Jonikas described how CO2 and bicarbonate availability today is lower than it once was hundreds of millions of years ago. This, he explained, combined with the fact that both molecules diffuse more slowly in water than in air, is what is thought to make increased carbon fixation especially important in aquatic autotrophs like algae. 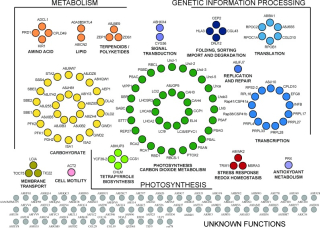 (click to enlarge) Figure 4. Functional annotation of the 190 proteins of the pyrenoid proteome. Source

But a definitive answer to the question remains elusive. The question was also tackled in a 2012 paper by re­searchers at the University of Munich, who studied horn­wort pyrenoids. The group constructed a phylogeny tree for pyrenoids of various hornwort species and found that the pyrenoids evolved independently in different linea­ges over the past 100 million years. Closer inspection of individual species revealed that some hornworts lacking pyrenoids flourished in periods with very low atmo­sphe­ric CO2 while species with abundant pyrenoids diminish­ed in periods of high atmosphe­ric CO2. This lack of cor­relation between CO2 levels and pyrenoid acquisition suggests that there must be additional major reasons for the evolution of the organelle (at least in hornworts), ones still waiting to be discovered. 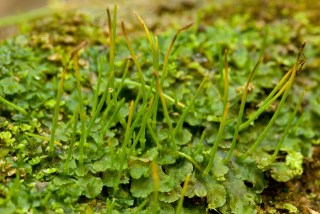 And so, the pyrenoid remains a mysterious and elusive entity. The stakes for better understanding its composi­tion and function are high. Transplanting pyrenoids into agricultural plants such as wheat and corn, which do not possess these organelles, has the potential to increase carbon fixation and therefore increase crop yield. Per­haps the next step towards relieving food insecurity in­volves a little green alga and its intriguing organelle. 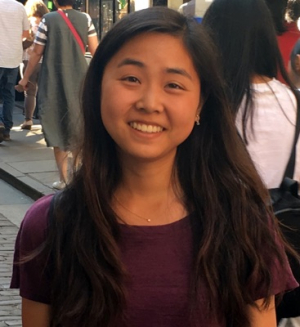 Janie Kim is a sophomore at Princeton University who will be ma­jor­ing in molecular biology. She is doing research on pep­tides secreted by algae-symbiont bacteria in the Donia Lab. She likes to bring her interest in microbes and sci-fi futurism into as many aspects of her life as possible, including her fiction writing and her sculpting (her Etsy truly fits with the idea of "niche marketplace").