The world of small RNAs and regulatory peptides in prokaryotes

The natural habitats of most bacteria are characterized by changing environmental conditions such as fluctuations in temperature, osmolarity, changing or limited nutrient supply, or the occur­rence of competing microbes and bacteriophages. Consequently, flexible and energy-efficient adap­tation to these changing external parameters is the basis for their survival. Successful adap­tation requires a regulation that can rapidly change existing biochemical processes. Beside regula­tion at the transcriptional level (activation or repression of transcription- and choice of sigma fac­tors) or the post-translational level (modulation of protein activity and/or stability) regulation at the post-transcriptional level, which modulates the translatability or stability of single mRNAs, is also important. Small (50 – 500 nt) regulatory RNA molecules, so called sRNAs, are responsible for these post-transcriptional alterations in gene expression. These sRNAs, as well as regulatory pep­tides, are now the object of considerable attention. 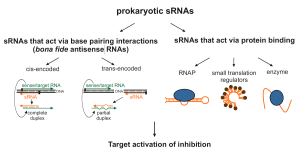 The regulatory potential of RNAs was already postulated in the early 1960es by Jacob and Monod, the fathers of prokaryotic gene expression. Nevertheless, it took about 20 years for the discovery of the first regulatory small RNA, an sRNA called, RNAI that controls the replication of the E. coli plasmid ColE1. Since then, numerous sRNAs have been found.

Based on their mode of action, sRNAs can be divided into two classes. One class functions by interaction with pro­teins. These sRNAs act either at the transcriptional level by direct interaction with the RNA polymerase or at the post-transcriptional level by titrating translation regula­tors or by modulating the enzymatic activity of their tar­get. A second class are antisense RNAs that function post-transcriptionally via direct RNA-RNA interactions. The sRNAs in this class can be further distinguished as being cis- or trans-encoded. The cis-encoded sRNAs are transcribed from the opposite strand of their single mRNA tar­get, and bind to it forming a perfect duplex. They are typically found within accessory or selfish ge­ne­tic elements like plasmids, phages or transposons, where they control copy number, segregational stability, switch­ing between lytic and lysogenic lifestyles or transposition frequency. In contrast, the chro­mo­somal location of trans-encoded sRNAs is independent from their (often multiple) target mRNAs. They regulate by forming short partial duplexes. Trans-encoded sRNAs are usually enco­ded in the bac­terial chromosome and are involved in the regulation of pathogenicity, metabolic fine-tuning, and stress responses. In all cases, these RNA-RNA interactions lead to either activation or repression of mRNA translation or modulation of mRNA stability.

For a long time, chromosomally encoded sRNAs were considered to be exceptional. This only changed at the beginning of the 21st century, as a consequence of bioinformatic searches. Nume­rous sRNA genes were found in the Gram-negative E. coli and in the Gram-positive Bacillus subtilis, plus other bacteria, archaea, and eukaryotes. At present, it is assumed that the average bacterial genome contains approximately 200 – 300 sRNA-encoding genes. Given this large number of sRNAs (and presumably there are also many yet-to-be-identified sRNAs) and the fact that their target genes and the mechanisms by which they regulate these targets are still not fully under­stood, the investigation of small regulatory RNAs is a huge field of research with great potential for additional important discoveries. 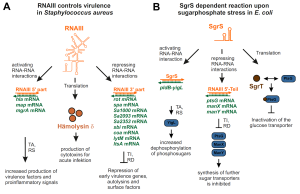 The majority of base pairing sRNAs do not contain open reading frames (ORF) and are thus referred to as non-coding RNAs. Exceptions are so called bifunctional or dual-function sRNAs, which possess small ORFs that are translated into functional peptides. Thus these sRNAs are a base-pairing antisense RNA and a peptide-encoding mRNA at the same time. Even though systematic search­es identified about 60 putative peptide-encoding sRNAs in E. coli, the identification of sRNAs with verified anti­sense and mRNA function remain exceptional. So far only five such bifunctional sRNAs are known. These are RNAIII and Psm-mec from Staphylococcus aureus, Pel-RNA from Streptococcus pyogenes, SR1 from B. subtilis and SgrS from E. coli. The antisense RNA activity and the function of the encoded peptide is usually part of the same metabolic pathway. Most of them are involved in the control and adaptation of pathogenicity. RNAIII, Psm-mec and Pel-RNA encode hemolysins or cytotoxic peptides and con­trol the expression of different virulence genes. The only known dual-function sRNA from Gram-negative bacteria, SgrS, is a master regulator responding to sugar phospha­te stress. SgrS prevents further synthesis of sugar trans­porters and promotes the translation of a sugar phos­pha­tase via base-pairing interactions. The SgrS encoded peptide SgrT (43 aa) inactivates existing glucose transporters by protein-protein interactions. A special case of bifunctional sRNA is SR1 from B. subtilis, because here the mRNA and the sRNA functions target different metabolic pathways. As antisense RNA, SR1 represses translation of the ahrC mRNA that encodes an activator of arginine catabolic operons. In contrast, the encoded pep­tide SR1P (39 aa) modulates the moonlighting activity of glycerolaldehyde-3P dehydrogenase A (GapA) and is thus involved in RNA degradation. Binding of SR1P promotes the interaction of GapA with RNase J1 as well as the activity of the bound RNase. Small ORFs were also detected in sRNAs from Clostridium perfringens, Streptococcus pyogenes, Rhodobacter sphaeroides, Streptomyces coeli­co­lor and Pseudo­mo­nas aeruginosa. However, neither the function of the encoded peptides nor their level of trans­lation have yet been determined. In the near future, the use of OMICS technologies will most likely further expand the number of known bifunctional sRNAs and the regulatory me­cha­nisms they use.

All genomes contain short open reading frames (sORF) that encode small peptides (sProteins), generally in the range of 100 amino acid residues or less. Despite their abundance, they have hardly been studied and have of­ten been overlooked in annotations and proteome ana­lyses, due to their small size. Best known are bioactive compounds like the ribosomal and non-ribosomal pep­tide antibiotics or some of the hemolysins, and the short peptides involved in bacterial quorum sensing that are usually generated from longer precursors and are not encoded in short ORFs. In addition, a few regulatory peptides have been discovered by chance. Among them are peptides that interact with larger proteins or with protein complexes to regulate their enzymatic activity, stability or integrity, nucleic acid chaperones, and type I toxins.

Certain small proteins that act as RNA chaperones have been intensively investigated for over three decades. Hfq (60-100 aa) is essential for the function of sRNA in E. coli, as it not only stabilizes sRNAs but also promotes sRNA-tar­get mRNA interaction, thus affecting mRNA stability and translation. Additionally, Hfq is invol­ved in control of Rho-dependent transcription termination and transfer of mRNAs to the RNA de­gradation machinery. In contrast, CsrA (60-75 aa) binds to single stranded GGA motifs of target mRNAs, thereby inhibiting or activating translation or influencing RNA processing.

Also well studied are peptides that are part of bacterial type I toxin-antitoxin systems. They consist of a short-lived sRNA antitoxin and a long-lived mRNA encoding a peptide toxic to the bacterial host. They are often found on plasmids and prophages or in prophage-like regions, where they confer segregation stability or prevent the loss of the phage, respectively. In most cases, the pro­duction of the toxic peptide leads to the formation of pores in the cell membrane (e.g. Hok, TisB, TxpA). Exceptions are the nucleases RalR (64 aa) and SymE (113 aa) from E. coli, which act as RNase and DNase respectively, and the B. subtilis BsrG (38 aa) which blocks cell wall biosynthesis without affecting the membrane potential.

Regulation of iron homeostasis in B. subtilis depends on the sRNA FsrA, assisted by the small pro­tein FbpB (59 aa) that appears to act as a putative RNA chaperone. Peptides are also involved in the homeostasis of other metal ions. In enterobacteria, the highly conserved MgtS (31 aa) is syn­thesized at low intracellular Mg2+ concentrations. It spans the cell membrane and interacts with the major magnesium transporter MgtA. The MgtS/MgtA interaction prevents MgtA degradation by the membrane protease FtsH. Another peptide, MntS (42 aa), is produced as response to low manganese concentrations. MntS interacts with the manganese exporter MntP, thus preventing loss of manganese. In addition, sProteins are involved in the coordination of metal-containing components in larger complexes. The paralogous peptides YbgT (37 aa) and YccB (30 aa) are en­coded within cytochrome oxidase operons of E. coli. They contain conserved cysteine residues in their transmembrane domains that are supposed to coordinate heme groups.

Peptides are often part of large protein complexes. They either support the formation, mainten­ance and dissolution of complexes or they regulate their function. In the photosynthetic cyano­bac­terium Synechocystis PCC6803, four peptides, PetG, PetL, PetM, and PetN, are part of the cyto­chro­me-b6f complex. PetG (37 aa) and PetN (29 aa) are required for the stability of the entire complex, whereas PetM (35 aa) has a regulatory role. The KdpABC complex is responsible for potassium uptake in different bacteria. The peptide KdpF (29 aa) that is part of this complex stabilizes the transporter in vitro. An additional regulatory function for KdpF of intracellular pathogens has been reported. Upon overexpression, KdpF interacts with the histidine kinase KdpD. Interestingly this leads to opposite effects in different bacteria. High KdpF levels increase replication of Salmonella typhimurium in macrophages, while it reduces it in mycobacteria. 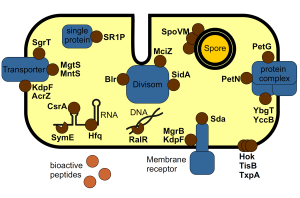 In B. subtilis, the model organism for studies of sporula­tion, sProteins are involved in the regulation of this im­portant lifestyle-changing process. Here, some peptides regulate the activity of enzymes, others have structural functions. The 46 aa sProtein Sda interacts with KinA, the first kinase for activation of the master regulator of spo­rulation, Spo0A, thereby repressing sporulation initiation. MciZ (40 aa) has the opposite effect. It binds to the C-ter­minal polymerization surface of FtsZ in the mother cell, thereby preventing the assembly of higher order FtsZ structures and subsequently cell division. In contrast, SpoVM (26 aa) is a membrane component. This peptide consists of an amphipathic helix and recognizes convex membrane curvatures, presumably as a multimer. The embedding of SpoVM into the outermost membrane of the forespore initiates spore coat formation. Additionally, it recruits the structural protein SpoIVA that forms a ba­sal layer encasing the forespore and serving as a plat­form for assembly of the rest of the spore coat.

The technical progress in methods for detection and analysis of peptides and the targeted search for such small proteins will lead to a significant increase in the number of known peptides as well as their functions and mechanisms of action in the near future. The world of small regulatory molecules, both RNAs and peptides, appears to be rich in unexpected and exciting participants. 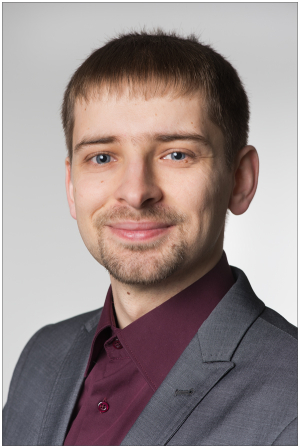 Matthias Gimpel is a scientist at Technical University, Berlin, Germany. He studied biochemistry at Friedrich Schiller University in Jena where he worked on the small regulatory RNA SR1 of Bacillus subtilis, the encoded peptide SR1P, and its interac­tion with the moonlighting enzyme GapA. He is currently head of the Molecular Genetics group in the Dept. of Biopro­cess Engineering at TU Berlin and focuses on the application of sRNAs in bioprocesses, the optimization of protein expression, and strain engi­neer­ing.