« The Story of Free Use GFP (fuGFP) | Main | Of Terms in Biology: Moonlighting » 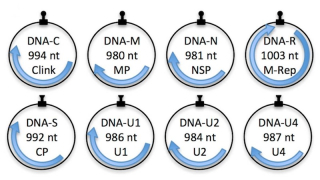 Viruses are very creative genetic entities. Their super­sonic mutation rates (compared to ours) have allowed them to explore a wide range of possibilities in genome structure. Thus, while all cellular life has double-stranded DNA genomes, with options limited to circular or linear chromosomes, viruses are represented by just about every type of genome imaginable. The Baltimore virus classification scheme has seven categories for genome type, including single-stranded or double-stranded RNA or DNA, organized into circular or linear chromosomes, segmented or all of a piece.

Some viruses, such as influenza virus, have a genome divided into separate segments, all carried within one virus particle (virion). When more than one virion infects a cell, segments from one particle can be exchanged with those from another in a process called reassortment. This mimics the benefits of sexual repro­duc­tion by allowing novel combinations to arise that may give the population a leg up when needing to adapt to a new environment. 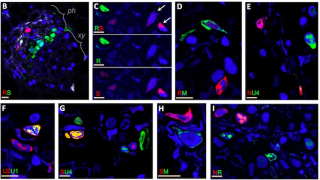 Figure 2. Cross sections of infected faba bean petioles, with phloem (ph, the only tissue infected by nanoviruses), and xylem (xy) bundles indicated in B. Pairs of segments are green- and red-FISH probed as indicated in each micrograph. The fluorochromes incorporated into the probes are inverted in B and C for control. Color channels are merged in all images but C where green and red are shown merged and separated to evidence the accumulation of the segment S in cells where the segment R is not detected (exemplified by white arrows). Source

Other viruses, however, take segmentation further, packaging each genome segment into its own separate virion. Such multipartite viruses (see this review) are common among those that infect plants and fungi. In fact, they comprise 30-40% of known viruses of plants. For example, faba bean necrotic stunt virus (FBNSV) – the topic of today's post – has a genome composed of eight circular segments of single-stranded DNA. Each genome segment is about 1000 nucleotides in length, and codes for different proteins necessary for infection to occur. For example, the capsid proteins required to package new particles are encoded on segment S, and the replication protein to make new copies of the virus genome is en­coded on segment R (Figure 1). However, each of the eight segments is packaged into its own virion. That's right - the genome of FBNSV is spread across eight se­parate particles.

For the majority of known viruses infection begins when a virion gains entry into an individual cell. The virion's genome encodes everything needed to take over the cell's resources for its own replication. Now please take a moment to ponder the odds of one of each of FBNSV's eight separately packaged segments winding up in the same cell. FBNSV belongs to the Nanovirus genus, but maybe a more appropriate name would be Casinovirus? How­ever, a recent study provides clues to this head-scratcher, seeming to show that the segments need not be all together in one cell in order to carry out an infection. Radical! 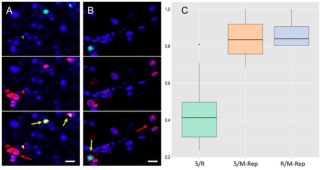 The researchers asked, how often are all eight genome segments found within a single cell in infected plant tissue? FBNSV infections can be induced in the lab by introducing the virus genome segments via eight sepa­rate bacterial plasmids in a technique known as agro­inoculation. They labeled pairs of segments such that each would fluoresce a different color (green or red) under the microscope. They then counted how often the members of the pairs appeared A) in separate cells, versus B) together in the same cell in infected plant tissue. Testing all possible combinations of pairs in this way, they found that any two segments were more often found in separate cells than in the same cell (Figure 2).

They then quantified both green and red fluorescence in every cell in which at least one of the pair was detected and found no linear correlation between the signals even when they switched labels for the pairs.  In other words, there doesn't appear to be a mechanism at work to re­gu­late the proportions of the eight segments entering a cell; instead they accumulate independently. Even the two segments encoding the key functions of replication (seg­ment R) and encapsidation (segment S) were most often found in separate cells. They saw this same scattering about of segments regardless of whether they looked at early or late stages of infection. (Elio is reminded of Isaiah 53:6: “we have turned every one to his own way.”) 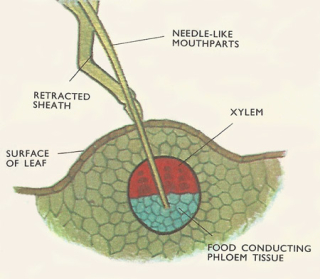 (Click to enlarge) Figure 4. FBNSV infects plant tissue when an insect carrying the virus breaches the phloem tissue to feed on the sap. Source

How, then, could such a virus launch a productive infec­tion with its important parts spread among various cells?  If we limit ourselves to the stodgy old idea that a virus launches an infection from within the confines of indi­vidual cells, we're left with a giant headache. But if we allow ourselves a slight paradigm shift, entertaining the possibility that a viral gene product made in one cell (the replication protein, let's say) can move into another . . . well, you see where this is going.

Focusing on cells where segment S had replicated in the nucleus, they looked for the presence of either segment R, which carries the gene for replication, or the replication protein (M-Rep) itself (Figure 3). Segment R was found in only about 40% of the cells where S had been replicated, while the M-Rep protein was found in about 85% (for the remaining 15% in which M-Rep was absent, they surmised that the protein had been degraded at the time of observation). In other words, the M-Rep protein was detected in some cells where the segment encoding it was absent. And notice in Figure 3C how the M-Rep protein was no more likely to be found in cells with R-segments than in cells with S segments. It appears, therefore, that either the replication protein or its mRNA is able to leave the cell in which it was produced and enter other cells, where it can go on to replicate the other cells' virus segments. 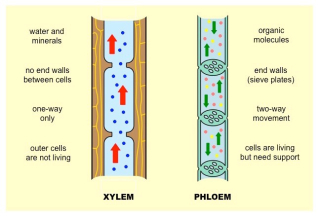 I have saved for last two important pieces of information that could influence your evaluation of this new model. The first concerns how FBNSV infections occur in nature.  FBNSV is spread when an insect bites into a plant to feed off of the sap (Figure 4). An insect carrying FBNSV would likely unleash a very high concentration of virions into a small, localized region. Enough to ensure that there is one of each of eight segments in at least one cell? Who knows, but the odds are looking fractionally better with this information.

The second key piece of information concerns a particular feature of the cells that FBNSV targets. Plants, as you may know, have two distinct types of vascular tissue that work together to transport fluids throughout the plant body (Figure 5). Xylem transports water and other molecules from the roots to the leaves. Phloem transports sugary sap made by photosynthesis from the leaves to other regions of the plant. FBNSV targets cells of the phloem, gaining access when insects punc­ture the phloem to get at the sap. Xylem and phloem both contain cells that are porous, through which molecules, including plant mRNAs and proteins, are redistributed among the cells. No one yet knows exactly how the plant accomplishes this socialist feat. Is FBNSV hijacking this system to distribute its own goods? (And will we later learn that this plant system originated from a virus?)

There's more work to be done before overturning the longstanding model that associates a virus replication cycle with an individual cell. But if these findings hold, they change the odds in favor of multipartite viruses – with the ability to distribute viral goods among cells, the existence of such heretical viruses isn't such a longshot.