« Of Terms in Biology: Moonlighting | Main | Chinese Surnames in Science » 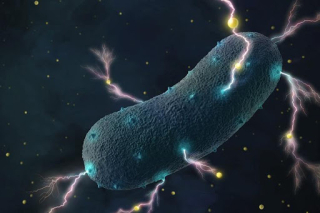 Of all the strange ways that bacteria can make a living, mineral respiration ranks among the strangest. Perhaps it’s my anthropomorphic worldview, but the idea of “breathing” solid rock (“No, they’re minerals!” Breaking Bad’s Hank Schrader would shout) seems completely ab­surd. And yet, bacteria have been doing it for billions of years. Microbiologists have long thought that extra­cel­lu­lar electron transfer (EET) – the process of trans­fer­ring electrons from the cytosol to the exterior of the cell – was limited to exotic, mineral-respiring, Gram-negative bac­te­ria. However, new findings from the Portnoy Lab (Light et al., 2018) suggests that EET is much more common than previously thought. By way of a novel flavin-based mechanism, a diverse group of non-mineral re­spiring, Gram-positive bacteria have also been found to engage in EET (Fig. 1).

A quick refresher: Cellular respiration is one way that cells generate energy. The oxidation of car­bon sources produces electrons. These get ferried down an electron transport chain to generate potential that can be harnessed to do work—such as the production of ATP—before being passed to a terminal electron acceptor. In humans and many other organisms that terminal acceptor is intracellular oxygen. But in bacteria engaging in EET, electrons are transferred to a terminal accep­tor outside of the cell, such as iron or manganese. This extracellular transfer produces an electrical current. This current can be captured by an electrode (Fig. 2), providing a useful tool for assaying EE, and for bioindustrial applications. (Microbial electron transfer has been explored many times on STC, including here, here, and here). 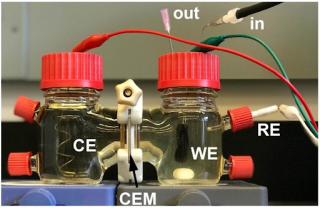 Figure 2. A microbial battery made from a culture of L. monocytogenes. CE, WE, RE: electrodes. CEM: cation exchange membrane Source

Over 25 years ago researchers observed that the food­borne pathogen Listeria monocytogenes, a fermentative Gram-positive bacterium, possessed extracellular ferric iron reductase activity. This was odd because L. mono­cy­to­genes does not have the genes or the mineral-respiring lifestyle that are conventionally associated with EET. The­refore, Light et al. hypothesized that L. monocytogenes might possess a novel EET strategy. To confirm this, they first tested the bug for electrochemical activity using cyc­lic voltammetry experiments, which use electrodes to mo­nitor electric current. The authors found that L. mo­no­cytogenes produces a catalytic wave similar to Shewanella oneidensis, a Gram-negative electrochemically active bac­terium. This provided strong evidence that L. monocytogenes does indeed engage in EET.

So, if L. monocytogenes possesses EET activity, but doesn’t have the genes conventionally asso­ci­a­ted with EET, how does it do it? To answer this, Light et al. began by performing a forward genetic screen to identify mutants with diminished ferric iron reductase and electrochemical activity. This led them to a largely uncharacterized, eight-gene locus. These genes included ndh2, enconding a unique Type II NADH hydrogenase—which catalyzes electron exchange from cytosolic NADH to a quinone derivative— and dmkA and dmkB, encoding paralogs of the microbial enzymes MenA and HepT—which catalyze production of the quinone demethylmenaquinone (DMK). Further tests showed that by using this unique NADH dehydrogenase and distinct quinone derivative, L. mono­cy­to­genes is able to segregate electron flow between EET and aerobic respiration. 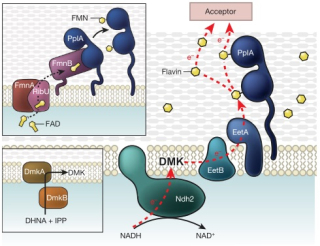 Other genes in the eight-gene locus implicated flavins – specifically, flavin mononucleotide (FMN) and flavin ade­nine dinucleotide (FAD) – as the substrate for the EET-as­sociated enzymes. This suggested that flavins are used to shuttle electrons to exterior terminal electron acceptors. It had been previously described that Gram-negative She­wanella species produce and secrete flavins for use as an electron shuttle. While L. monocytogenes does not produ­ce flavins itself, environmental flavins are commonly found in the plant biomass and mammalian hosts it calls home. The authors found that adding FMN to cultures of L. monocytogenes increased the electric current and ad­ding FAD enhanced the concentration-dependent re­duc­tion of insoluble ferric oxide, confirming their role as the electron shuttles.

The authors combined all their findings into a molecular model. In this model, electrons are trans­ferred from intracellular NADH to membrane-bound DMK, then to extracellular flavins, before ul­timately being transferred to a kinetically favorable terminal electron acceptor in the environment (Fig. 3).

EET confers a competitive advantage, and is a property of hundreds of Gram-positive species.

With the mechanism behind L. monocytogenes’ EET activity characterized, the next question asked is why this bacterium might have evolved EET in the first place? After all, being a foodborne pa­tho­gen, it isn’t using EET for mineral respiration. Following-up on their observation that EET genes were dispensable under aerobic growth but essential under anaerobic growth, the authors hypo­thesized that EET might give L. monocytogenes a competitive advantage during growth in the in­tes­tinal lumen. Indeed, Ndh2 transposon mutants showed a six-fold decrease in intestinal coloni­za­tion in mice models.

If L. monocytogenes had increased fitness utilizing flavin-based EET, the authors hypothesized that it might also be found in other Gram-positive species. Indeed, BLAST searches revealed that the genes responsible for this new EET mechanism are found in hundreds of species across the Firmi­cutes phylum. These species occupy a diverse array of ecological niches, and include several hu­man pathogens, members of the human microbiota, and bacteria used for food fermentation and probiotics.

Compared to Gram-negative bacteria, very little is currently known about EET in Gram-positive bacteria. Light et al.’s flavin-based mechanism could explain many previous reports of EET-like activity in several Gram-positive species. For example, Enterococcus faecalis, an opportunistic pathogen found in mammalian intestines, was found to possess EET activity (Pankratova et al. 2018). Like L. monocytogenes, E. faecalis EET requires DMK but not heme, though Pankratova et al. did not include electron shuttling by flavins in their model. Light et al. found homologs to most of the genes in their EET locus in E. faecalis, suggesting that E. faecalis’ EET activity could be flavin-based. Additionally, a strain of Bacillus megaterium isolated from an anodic biofilm was found to have EET activity that was boosted by flavin addition (You et al. 2018), though the genetic and molecular bases behind it were not explored.

The finding that EET activity is a property of diverse Gram-positive species opens up many new possibilities for bioindustrial applications. While Gram-positive bacteria have been described as “weak” current generators compared to Gram-negative species, this flavin-based EET involves fewer electron transfer steps, and this simpler mechanism could prove easier to engineer. Additionally, given its essential role in anaerobic growth, it could be a new target for antibiotics against Gram-positive pathogens.

Perhaps the most exciting aspect of this newly-discovered EET mechanism is how different it is from previously characterized mechanisms. Additionally, its apparent abundance in fermentative bacteria suggests that, rather than being a specialized process unique to niche mineral-respiring bacteria, EET may represent a fundamental facet of microbial metabolism. Clearly, there is much to be learned about EET. 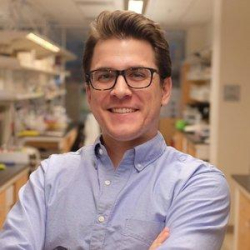 Kevin is a graduate student at Washington University in St. Louis in the lab of Dr. Gautam Dantas. He is on Twitter @kevinsblake.