The Cambridge Dictionary defines "moonlighting" as:

the act of working at an extra job, especially without telling your main employer

(Far) off the job market, "moonlighting proteins" are single polypeptide chains that perform mul­ti­ple biochemical or biophysical functions in archaeal, bacterial, and eukaryotic cells. Constance Jef­fery coined this term in 2003 to account for the recurrent observation that newly identified pro­teins involved in the complex processes of replication, transcription, and tumor suppression (in euks) had other, previously identified, functions, often in central metabolism, for example in gly­co­lysis or the TCA cycle. But who is, in this case, the 'main employer' from the Cambridge Dictionary definition above? Must be the scientist, surprised to find a novel function for a well-known protein in an unsuspected context, right? This is a biased perception that started with George W. Beadle & Edward L. Tatum's "One gene – one enzyme hypothesis" (based on their seminal paper from 1941), and before it was clear that DNA is the genetic material (Avery et al. was published in 1944). "Bi­as­ed perception" because the hypothesis tacitly contained the assumption that a protein, en­co­ded by a gene, would have only one function, namely the one that interested researchers at that mo­ment. 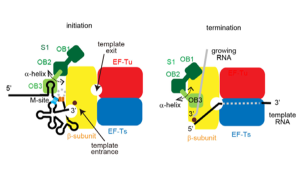 An example from the early 1970s of proteins with dual functions comes from studies on the mechanism of re­plication of the small single‑stranded RNA bacteriophage Qβ, which recruits host proteins involved in translation to replicate its RNA. Qβ RNA replication requires the phage-encoded replicase – an RNA-dependent RNA polymerase – in complex with the host's ribosomal protein S1, and translational elongation factors EF-Tu and EF-Ts (Figure 1). More recent structural studies show that EF-Tu and EF-Ts do not undergo gross conformational changes in the Qβ replicase complex, and contact the phage RNA much the way they contact tRNAs during translation. Al­so, ribosomal protein S1 "fits" in the complex in a way that corresponds to its role during translational initiation (S1 is important for initiating translation in mRNAs lack­ing a Shine-Dalgarno sequence). Among phages, "recruit­ing" one or more host replication proteins for the replica­tion of their genomes is rather the rule than the excep­tion, but recruiting host translation proteins for this purpose is at least unusual. But with phages you always have to be open for surprises, and in the 1970s, dual functions of proteins were thought of exceptions from the "one gene – one protein (one function)" hypothesis rather than its falsification.

Enzymes can perform functions other than the ones they are known for – "moonlighting" accord­ing to Jeffery – when they are "geographically displaced" from their regular compartment. For ex­ample, enolase (the enzyme that carries out the ninth step of glycolysis) is often found on the sur­face of pathogenic or commensal bacteria where it interacts with the host's extracellular matrix or serves as a receptor for plasminogen. Henderson and Martin (2011) give an overview of normally cytoplasmic bacterial proteins that, when located on the cell surface, assume a role as virulence factors. The localization of cytoplasmic proteins on the cell surface could easily be a preparation or purification artifact, for example binding of proteins from dead and lysed cells to living siblings. However, Saad et al. showed that, in the presence of low glucose levels, L. plantarum has an ele­va­ted level of cell wall-associated glyceraldehyde 3-phosphate dehydrogenase (GAPDH, the enzyme that normally carries out the sixth step of glycolysis). 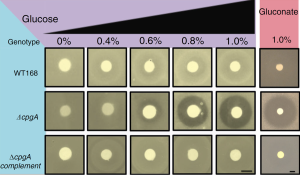 Figure 2. A B. subtilis 168 ΔcpgA mutant is into­xi­cated by glucose or gluconate. Disk diffusion as­says to measure glucose and gluconate sensiti­vi­ty were determined on MH medium. Under our conditions, 1% glucose (10 mg) is 55 μmols and 1% gluconate is 46 μmols on the filter. Source

In a very recent study, Sachla and Helman (2019) show that it is not necessary for a moonlighting protein to be "geographically displaced" to perform dual functions. The cytoplasmic B. subti­lis CpgA protein belongs to a subset of the so-called TRAFAC GTPases – of altogether 17 P-loop type GTPases in this bacterium – that are involved in ribosome assembly. CpgA is specifically involved in the assembly of the 30S subunit. A ΔcpgA mutant displays a range of growth phenotypes, including cold-sensitivity and increased sensitivity towards ribosome-targeted an­tibiotcs (among other, not ribosome-related phenotypes like altered cell morphology). Unexpectedly, this ΔcpgA mutant was unable to grow in the presence of glucose or gluconate as monitored by a zone-of-inhibition assay on Mueller-Hinton (MH) medium, a rich medium with abun­dant amino acids that support gluconeogenic growth (Figure 2). This unusual phenotype – B. sub­tilis mutants that are intoxicated by glucose are not known – could be fully complemented by re­introduction of cpgA at its locus, and also by overproduction of GndA (6-phosphogluconate dehy­drogenase), its paralog GntZ, phosphoglucose isomerase (PGI), and by yeast Pho13, an enzyme that specifically catabolizes erythrose-4-phosphate (4PE). To understand the rationale of these complementations one has to dive deeper into glycolysis and the pentose-phosphate pathway (PPP) (here is a metabolic flow chart). In brief, the ΔcpgA mutant is unable to grow in the presence of glucose or gluconate because a metabolic restriction arises from the inhibition of 6-phospho­glu­conate dehydrogenase (GndA) by 4-phosphoerythronate (4PE), an adventitious oxidation pro­duct that arises from the pentose phosphate pathway (PPP) intermediate erythrose-4-phosphate (4PE). 4PE initiates an inhibition cascade in which 6-phosphogluconate accumulates and compe­ti­ti­ve­ly inhibits phosphoglucose isomerase (PGI), leading to metabolic gridlock, bacteriostasis, and ultimately cell death. CpgA as a broad-spectrum phosphatase prevents metabolic intoxication by cleansing the metabolite pool of potentially toxic molecules, including 4PE. The authors conclude that the metabolite-proofreading role of CpgA is essential for growth of B. subtilis in the presence of glucose or gluconate, and that the role in ribosome assembly seems important for growth at low temperatures where ribosome assembly is potentially compromised.

A conclusion? The term "moonlighting" may be a misnomer because it is often not possible to dis­criminate in a meaningful way between major and accessory roles of a protein in the different pathways it is involved in. But the term will stick, and rightly so. It will serve as a reminder for sys­tems biologists that network reconstructions based on, for example, proteome data have to ac­count for proteins 'working at an extra job, without telling their main employer' in addition to their 'annotated' job (in the protein data bases).