A while ago, I read a piece from Catapult Magazine that mused about the strangeness of eating fish. The article asked, why do we so willingly eat creatures that come from a place so poorly understood? From white-fleshed pelagic fishes to shellfish holding fast on green-caked hulls of ships and stones, from camouflaged bottom-dwellers to crustaceans scuttling over sea floor detritus, alien sea life is converted to culture and heritage served on a dinner plate – in the forms of Japanese nori, Loui­siana seafood boil, Malaysian nyonya fish head curry, Korean odeng fish cakes. Granted, modern fish farming creates defined confines, but this co-opting of the ocean doesn’t change how little we understand about it and its denizens and all of the mysterious unknowns.

I read a recently published paper that puzzled apart one of the ocean’s mysteries, and was fasci­nated. The paper from Dr. Mohamed Donia’s lab at Princeton University is about a bacterial sym­biont that lives within certain sea sponges and manufactures protective chemicals for its host. The endosymbiont tenant, which the team dubbed 'Candidatus Endohaliclona renieramycinifaciens', produces plasmid-encoded cytotoxins called renieramycins that the sponge deploys in self-de­fense against predators and infectious microorganisms. The concept of plasmid clusters inside of bacterial cells inside of sponge cells evokes a delightful Russian nesting doll imagery. 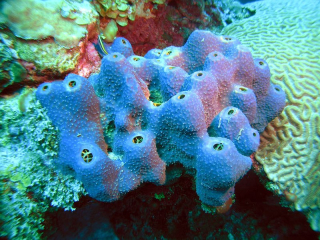 The specific marine sponges studied in this paper, of the genus Haliclona, were collected from waters off the coast of Palau, Papua New Guinea, and Bali, popped into plas­tic bags filled with local seawater, and shipped off to the lab. According to those who were present in the lab at the time they arrived, the Bali sponges were still faithfully winnowing water through their body cavities as they lol­led on the benchtops in their bags. The sea sponge, the first animal on Earth, is an intriguing organism: cut or grind up one or force it through a sieve, and it will re­ge­ne­rate, a quality immortalized in pop culture by a Nickel­odeon cartoon character with a seastar pal. From being used as padding inside ancient Roman helmets to producing valuable antibiotics when teamed with bacterial partners-in-crime, the humble sea sponge boasts an impressive panoply of abilities (for an interesting review on molecules made by sponges, see here). 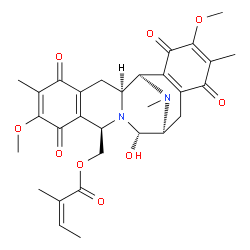 Renieramycins, the defensive cytotoxic products of this sponge-bacteria pact, are a group of tetrahydroisoqui­no­line quinones (THQs) that are produced by Haliclona, Xe­stospongia, and Neopetrosia sponges. In this paper, the presence of renieramycins in four sponge samples was first confirmed via high-performance liquid chromato­gra­phy (HPLC) and nuclear magnetic resonance (NMR). The team then pinpointed the biosynthetic gene cluster re­sponsible for renieramycin production via Illumina deep metagenomic sequencing, searching the resulting scaf­folds for homologs of a similar biosynthetic gene cluster. They identified a lone biosynthetic gene cluster, ren.

To uncover whether the cytotoxins were pumped out by the sponges or the bacteria, the team inspected the Illumina sequencing read scaffolds containing ren. They found that the ends of the scaffold that carries the gene are joined, confirming that the gene cluster exists on a plasmid, p-ren, in the metagenomes of all four sponges. From the vast swaths of scaffolds that originated from the sponge metagenome, the one that corresponded with p-ren and the bacterial chromosome were consistently found together in the same samples, sug­gesting that the mastermind of renieramycin is indeed bacterial.

Armed with this knowledge, the team moved onto sleu­thing within the host sponge cells for the physical whe­reabouts of the endosymbiont, dubbed Ca. E. renieramy­cinifaciens. They gently homogenized the Bali sponge sample and separated the resulting particles by size via flow cytometry. The largest-sized particles showed the highest abundance of E. renieramycinifaciens 16S rRNA as well as the highest sequencing coverage of p-ren and the bacterial chromosome, which suggested that the particles could be bacteria-laden bacteriocytes. They confirmed these results with fluo­res­cence in situ hybridization (FISH): microscopy showed that signals from the E. renieramycinifaciens-specific probe were only seen in the hypothesized bacteriocytes. This was verification that E. renie­ramycinifaciens resides inside of the Haliclona sponge cells in the form of chemobacteriocytes: bac­teriocytes that harbor symbionts responsible for producing useful chemicals for the cell.

So, if the bacterium is indeed an intracellular endo­sym­biont, it would be fair to expect it to have a reduced ge­nome. As anticipated, annotating the E. renieramycinifa­ciens genome with predicted gene functions and com­paring it with the annotated genome of the closest free-living relative revealed that the endosymbiont’s genome is indeed greatly reduced: it lacks genes essential for free-living organisms such as those for DNA repair, re­combination, the TCA cycle, cell signaling, cell surface structures, and biosynthesis of nucleotides and amino acids (except for a partial pathway for lysine). So, E. re­nieramycinifaciens is dependent on its sponge host for survival.

What is especially fascinating is the team’s following discovery of a division of labor between the sponge and endosymbiont in producing renieramycin. The endosymbiont is not capable of manu­facturing the defense chemical solo; instead, it depends on the Haliclona sponge to supply it with nearly all of the required substrates, which run the gamut from amino acids to cofactors. When symbiont and sponge are combined, all necessary pieces are in place for production of the de­fense chemical, like gears and sprockets meshing together in fluid synchrony, or a microscopic Astaire-Rogers number. The concept of such mutual reliance and collaboration in nature is exci­ting: it is, of course, fascinating from a scientific standpoint, but also a little uplifting from a human one. 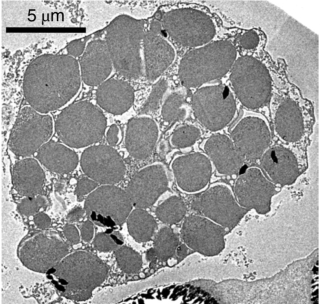 Ever since dwelling on the oddities of seafood consump­tion and this sponge-bacteria dynamic duo, I’ve been paying more attention to marine organisms sneaking, swimming, and crawling into life in and out of the lab, from sponges to other sealife. With each DNA gel and each agar plate, I’ve found myself thinking about agaro­se’s seaweed origin: to uncover secrets about everything from microbes to the macroscopic, science is dependent on a product of the ocean, the soup from which those microbes and all other life emerged. Labs will continue to use increasingly sophisticated equipment, from automa­ted pipettes to colony-picker robots to high-tech sequen­cers galore, but to run an agarose gel – arguably the linchpin of molecular biology – we’re all bound to watery origins, just as the Haliclona sponge is bound to its pro­kar­yotic companion.