Bacterial Weapons in the War Against Phages

The war between bacteria and phages has been waging for eons longer than humans have exist­ed. Consequently, many bacteria have developed novel and unique ways for defending them­selves against these foreign invaders. Some change their surface proteins to prevent detection, like changing a lock on a door. Others give their own lives, initiating programmed cell death for the good of the colony. In some cases, they produce chemical compounds referred to as secondary me­tabolites that inhibit the growth of nearby bacteria or act as toxins to deter other organisms. These chemicals can be helpful in competitive environments as a way to secure more resources.

Recently, Kronheim et al. put forward another convincing argument for why bacteria keep these se­condary metabolites around. They argue that in the actinomycete, Streptomyces, such secondary metabolites act as DNA-intercalating agents, molecules that can wedge themselves between two strands of DNA. Interestingly, these small molecules are able to selectively prevent the replication of phage DNA while allowing host DNA replication to proceed unhindered. S. coelicolor in parti­cu­lar has provided a treasure-trove of small molecules that act as DNA-intercalating agents. Some of these have even been repurposed as anti-cancer drugs due to their ability to preferentially inhibit cancer cell replication. 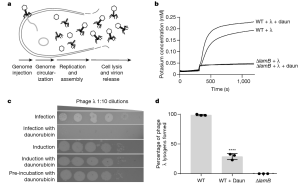 Figure. Daunorubicin acts at an early stage of pha­ge λ infection. a, The life cycle of a phage pre­sents a number of steps that could be in­hibited by secondary meta­bo­lites. b, Potassium efflux assays with wild-type (WT) cells or cells that lack the λ receptor (ΔlamB) reveal that dau­no­rubicin does not block phage genome en­try. n = 3 independent biological rep­licates. c, In­duc­tion of a λ lysogen in the pres­ence of dau­norubicin or pre-treatment of the phage does not inhibit phage plaque formation. n = 3 bio­lo­gical replicates. d, Daunorubicin decreases pha­ge λ lysogen formation by approximately 70%. n = 3 independent biological replicates. ****P < 0.0001; an­alysis of variance (ANOVA). Source. Fron­tispiece: Microscope image of Strep­to­myces coelicolor colonies. Source

To find molecules that could potentially act as defenders against phage attack, these investigators screened thou­sands of compounds, including FDA-approved drugs, bio­active small molecules, and natural products with un­known functions, against E. coli cells infected by lambda, a well-characterized phage. Out of the thousands of com­pounds screened, eleven were able to prevent phage growth. Of these eleven, four belonged to a class of mo­le­cules called anthracyclines, which are DNA-intercalating agents commonly used to treat cancer. These com­pounds were daunorubicin, doxorubicin, epirubicin, and idarubicin. Further testing revealed that many Streptomy­ces species naturally produce the first two, suggesting that these molecules play a key role in phage defense.

The authors also investigated how these compounds are able to inhibit phage replication. Daunorubicin and do­xorubicin are already known to be DNA-intercalating agents, but how they prevent phage replication has yet to be elucidated. For this reason, the compounds were tested for their ability to obstruct particular stages of the viral life cycle. First, the researchers saw that potassium release, a common marker for phage entry into a cell, was not disturbed in the presence of the small molecules. This indicated that viral entry was not inhibited in any way. After phage integration into the host chromosome, phage particle release was not impeded by the presence of daunorubicin and doxorubicin either. Later on in the viral cycle, however, in the presence of daunorubicin, the infecting phage was only able to integrate in­to the genome 30% of the time, as opposed to every time when the small molecule was not pre­sent. Thus, while the actual stage at which daunorubicin and doxorubicin act was not identified, the authors did find that the compounds seem to affect the phage somewhere after entry into the cell but before genome replication.

Kronheim et al. also investigated why these molecules affect the phage genome, but not the bacte­rial genome. They found that attaching sections of bacterial DNA to the phage genome seemingly protected the phage from daunorubicin, meaning that the bacterial genome has some sort of in­herent protection against its own defense. The mechanism behind this protection remains to be seen.

This paper is promising in that it found a number of secondary metabolites that could defend against phages. Still, there’s more work to be done. While some compounds were found to be DNA-intercalating agents, how they inhibit phage growth is not yet understood. Additionally, the compounds screened were checked for their ability to inhibit a double-stranded DNA phage, but these aren’t the only viruses found in the wild. Future work could expand to cover other kinds of phages, such as those with single-stranded DNA or RNA genomes. This could lead to the discovery of any secondary metabolites that might inhibit replication of these viruses. Perhaps such com­pounds could prove useful as antiviral drugs for humans. Altogether, the ubiquitous nature of some of these anti-phage metabolites suggests that they could play an important role in microbial evolution. May we soon be able to use the weapons of this microbial war for ourselves?

Carleen Villarreal is a Master’s student at the University of California San Diego studying host-pathogen interactions in plants. Her current research focuses on identifying key components of inducible defense pathways in plants as part of the Huffaker lab. She enjoys teaching and occasionally spends time baking and crocheting at home.

Andy Bodnar is a second year Master’s student in Dr. Milton Saier’s lab at the University of California San Diego with a focus in molecular biology. Currently he is studying how the insertion of IS elements into secondary DNA structure can activate or deactivate genes in response to environmental conditions. In his spare time he can be found riding his dirt bike in the mountains and deserts around southern California, or taking in a Padres game.

Michelle Prieto is a Master’s student in Dr. Bianca Brahamsha’s lab at the Scripps Institution of Oceanography. She is studying predator-prey interactions between cyanobacteria and protozoa with applications towards biofuel pro­duction. In her free time, she is an avid scuba diver and enjoys exploring the underwater world in her home country, the Philippines.