This article by guest author Paul Carini was first published in mSystems (CC BY 4.0). We reprint it with the author's generously granted permission.

Sooner or later, everything old is new again.
—Stephen King (29)

For over a century, our understanding of microbial biology has been predicated on the ability of scientists to cultivate and study organisms under controlled laboratory conditions. Indeed, until the 1980s, our knowledge of microbial diversity was constrained to those microbes that grew in the laboratory or appeared under the microscope. Yet, it was also understood that the majority of microbes were recalcitrant to growth in the laboratory. The incongruence between enumeration by direct microscopic counting and culturable counting was eloquently presented by Staley and Konopka as "the great plate count anomaly" (1) and is oft attributed to the widespread notion that more than 99% of bacteria are unculturable. This anomaly was confirmed when Pace and col­lea­gues started investigating natural environments with molecular tools targeting rRNA genes, lifting the veil masking vast uncultured microbially diverse populations for the first time (2). Perhaps in­advertently, the coincident timing of the great plate count anomaly and Pace et al.’s early rRNA-based approaches became the impetus for a major shift in the ways that microbial ecologists ex­plored natural microbial assemblages; a whole generation of researchers traded piles of agar plates and growth curves for DNA sequencers, computer servers, and metabolic reconstructions from genomic data. Today, DNA sequencing is perceived (or at least touted) as the way to circum­vent the problem of microbial unculturability.

After a decade of refining the “big-data” side of microbiology, we are in the midst of a cultural re­naissance in which the importance of cultivation-focused efforts has been rediscovered, with ex­citing results and implications. Several groups have demonstrated that a high percentage of host-associated microbiome members can be cultivated (3–7) and that such culture collections are in­dispensable for deducing important aspects of microbiome function (8–10). The renewed moti­va­tion to culture cells from nonhost environments, such as soil (11), aquatic environments (12), and the deep biosphere (13), is inspired, in part, by these successes and the enormous amounts of mo­lecular data that have illuminated seemingly limitless microbially diverse populations that we know very little about (14). We can now dissect life’s blueprints for these uncultivated lineages and use this information to facilitate cultivation, insight not afforded to previous generations of resear­chers.

Translating genomic information into an understanding of organismal physiology is anything but straightforward, and culturing environmental microbes is very timeintensive. This is highlighted by the story of the abundant marine heterotroph Pelagibacter (SAR11). Pelagibacter was discovered with molecular methods in 1990 (15) and cultured on natural seawater medium 12 years later (16). Surprisingly, it was not immediately obvious from Pelagibacter genome sequences (17) what nu­trients were required for growth. In fact, with genomes in hand, it took an additional 8 years plus several postdocs and graduate students to translate that information into a defined medium (re­ference 18 and references therein). Subsequent laboratory studies have elucidated the unusual biology that contributes to Pelagibacter's unparalleled success in the sea and its key role in Earth's biogeochemistry (reviewed in reference 19). The unique characteristics of Pelagibacter cells were discovered by careful testing in the laboratory after scrutinizing of genomes, transcriptomes, and proteomes, a back-and-forth process that requires a culture, a genome, and patience. 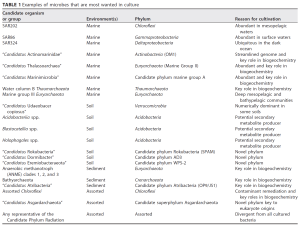 (Click to enlarge) Table: Examples of mic­robes that are most want­ed in culture. Source. Frontispiece: detail from Source

Pelagibacter's narrative highlights an important lesson. By shying away from the challenge of stu­dying microbial cul­tures, we effectively turn our backs on an entire world of emergent properties that govern microbial activity and ecosystem function, properties that are not always pre­dic­table a priori from sequence information. To analo­gi­ze, one cannot understand the experience of driving a Ferrari from the list of its components; a parts list does not convey the handling, the sound, or the driver's con­nection with the machine. Because of the investment in sequencing technology, our genetic inventories are more extensive than ever, yet the cultivation of novel microbes re­mains a complex task, much like assembling a 3-di­men­­sional puzzle. Hypotheses generated from genome-based metabolic reconstructions from single cells or metagenomes provide a crucial di­mension to guide the assembly of the puzzle, but genomes are a parts list; we seek an under­stan­d­ing of the emergent principles of the cells themselves and the communities that they constitute.

While this cultural renaissance is indicative of a greater awareness for the need to study cell cul­tures to comprehensively understand Earth’s microbiome, it is not always clear how to leverage and integrate molecular data to do that. Below are three steps that will lay a foundation for the future of integrated Earth microbiome research with an emphasis on elucidating the uncultured microbially diverse populations that we understand the least.

Decide What to Culture

Let us be clear; from a sheer numbers perspective, it is impossible to culture every microbe on Earth no matter what the environment. Because of this, we should set cultivation goals that are specific, achievable, and relevant. I envision explicit mostwanted lists that use molecular data to inform exactly which taxa we should target for cultivation and why they are important. Further, this molecular data can be used to identify potential cultivation strategies through metabolic re­construction. The rationales for cultivation of a particular taxa will vary across research groups but may include (i) an organism's high relative abundance, (ii) its key role in biogeochemistry or biore­mediation, (iii) its potential to produce natural products, and (iv) its substantial divergence from cultured taxa. Table 1 contains a short list of potential most-wanted microbes from various eco­sys­tems that would be valuable to obtain in culture, based on an informal survey of colleagues and my own interests.

A popular perception is that exploratory culture-based research is unusually risky and unlikely to result in new isolates of interest. First, this is false (4,11,12,20,21). Second, all science is risky, and much is unsuccessful; how much do we want to learn? While it is tempting to point the finger at funding agencies for not supporting exploratory cultivation work, it is our colleagues, the review­ers and panelists, that marginalize these proposals. Funding agencies could shift this discourse by soliciting proposals that explicitly aim to (i) coordinate exploratory cultivation experiments with creative genomics or metabolomics approaches, (ii) develop new or higher-throughput cultivation strategies, and (iii) support long-term projects that investigate the biology of slow-growing or non­canonical model organisms that do not conform to the scale of traditional funding cycles. As J. Ca­meron Thrash explores in a companion Perspective in this issue, we need to constrain the costs of investing in cultivation-based work. If microbes hold the answers to many solvable problems, at some point we will need to invest in culturing them. Long-term, I envision well-funded high-through­put cultivation core labs that culture bacteria from user samples. Not only would these centers preserve living biodiversity that will almost certainly have utility in a changing world, but the cultivation of enigmatic taxa might be a strict numbers game: the more experiments that are conducted, the more likely they will capture something novel.

The ability to sequence DNA is no longer a limiting factor in understanding microbial communities; the bottleneck lies with translating these sequence data into a functional context. The root of this limitation is that most genes have poor or no functional annotation, and our interpretation of the remainder is biased by the physiology of a few model organisms, the so-called streetlight effect (22). Isolating and studying organisms with unusual biology can bridge this knowledge gap. For ex­ample, focused functional genomics approaches uncovered widespread lipid remodeling in mari­ne heterotrophs and related this process to poorly annotated genes (23–25). Likewise, the geno­me-facilitated discovery of complete ammonia oxidation to nitrate by Nitrospira cultures funda­men­tally changed our understanding of the nitrogen cycle (26). Moreover, high-throughput func­tional genomics approaches, such as transposon insertion sequencing (TnSeq), have proven to be scalable and powerful for identifying the fitness landscape of poorly annotated genes (27). While these approaches certainly require more effort than sequencing alone, the information that they provide in many cases unambiguously links genotype to phenotype.

Oligotrophy as an Emergent Principle

The challenge of translating genomic data into microbial cultures and linking genes with function is a driving force for our research group. However, an important dimension to the problem of iso­lating uncultured microbes may be an emergent principle not easily deduced from genomes: oli­go­trophy. Oli­go­trophy describes the paradoxical and enigmatic phenomenon of microbial cells growing optimally when nutrient availability is low. New evidence suggests that the numerically abundant microbes in nonhost systems are oligotrophs (28). Yet, we have a massively incomplete understanding of the physiological basis for oligotrophy and how oligotrophs contribute to micro­bial community stability and ecosystem function.

We have built our lab around the idea that many uncultured soil microbial lineages are oligo­trophs. In general, oligotrophs are challenging to culture because they are small, slow-growing cells and do not attain high yields on low nutrient media, rendering common methods of quantify­ing microbial growth ineffective. To circumvent this, we invested in equipment to separate cells from environmental matrices and count oligotrophic cultures with high throughput and sensitivity. Our initial cultivation results are encouraging; across several experiments, we have ~3,000 cultur­es, some of which are representatives of uncultivated lineages of important soil bacteria. In these experiments, the concentration of a defined set of nutrients significantly influenced what grew, and many strains isolated on low-nutrient medium appear to be obligate oligotrophs that are in­hi­bited by modest concentration increases of the same nutrients. Our long-term goal is to increase the efficiency and reduce the person-hour cost of cultivation by automating certain aspects of the cultivation process so that we can spend more time investigating interesting isolates in-depth.

My hopes are not only that the cultural renaissance is perceived as a reference to a renewed in­ter­est in culturing cells but also that it invokes a cultural shift in the way microbiologists perceive cells and their role in modern microbiology. Cells are not simply "bags of biochemistry" but living enti­ties that are seamlessly integrated into the physical, ecological, and evolutionary landscape of Earth. Because of this, the methods by which we choose to study them must be similarly inte­gra­ted. 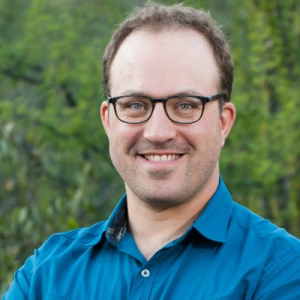 Paul Carini is Assistant Professor for Microbial Ecophysiology at the Uni­ver­sity of Arizona. He's on twitter: @Paul_Carini.