Genome with the Wind...

Ancestors of our cousins, the chimpanzees and bonobos, were once one single primate species which split into two when the Congo River formed about 2 million years ago. Not good swimmers, they are now very distinct species, with obvious physical and behavioral differences.

When there is geographical separation, we can anticipate genetic differences. That's exactly what a team led by Konstantin Severinov expected to find when they set out to study geographically dis­tant populations of Thermus bacteria. After all, these microbes generally live in hot springs at tem­peratures around 160 degrees Fahrenheit (~70° C). However, despite the communities existing a thousand miles away from each other in Northern and Southern Chile (El Tatio, Termas del Flaco), and across the world in Italy (Mount Vesuvius hot gravel and hot springs at Mount Etna), and Rus­sia (Kamchatka's Uzon caldera), in some ways individuals appeared remarkably similar. The study, published this year in the Philosophical Transactions of the Royal Society B, reveals a surprising re­semblance in some of the CRISPR spacers of differently-sourced Thermus strains.

A brief anatomy of a CRISPR

CRISPRs (clustered regularly interspaced short palindromic repeats) are short viral DNA sequences retained in the genome of bacterial cells that have survived infection by bacteriophages (phages). The CRISPR-Cas system includes these unique viral sequences – termed spacers – along with iden­tical repeats (between and flanking each spacer) and CRISPR-associated genes (shortened to the suffix "Cas").

CRISPR spacers act as a sort of adaptive immune response, allowing the progeny of the cell to avoid future infection by recognizing the same invading phages and dissecting their DNA. Multiple sequences from a phage can become spacers, and an organism can carry more than one spacer for a single phage. This helps prevent against viral mutation in one region rendering moot the be­nefit of that spacer.

Spacer sequences are arranged in a precise order, with new spacers added to the promotor end of the CRISPR array along with an additional repeat for each new spacer. Due to this consistent order of spacers, similarities between CRISPR arrays of different bacteria can be used to deduce their history and heredity. Over thirty subtypes of CRISPR-Cas systems exist, divided into two classes and six types. Since CRISPR arrays confer phage-resistance benefits, bacteria with useful spacers are expected to outcompete in the community among others that are not so endowed. 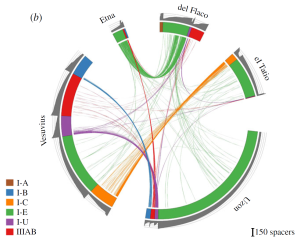 Diversity of CRISPR spacers in environ­mental Thermus samples. (b) Spacers from the same location are merged. The res­ulting diversity of unique 7877 spacers is shown in the circular dia­gram. Spacers from dif­ferent locations that differ from each other by fewer than two nuc­leotides are connected by matching colour li­nes. Grey colour histograms on the outside show cluster size in log10 scale. For the more de­tailed legend see: Source. Front­page: Elec­tron micrograph of an ultrathin section of T. ther­mophilus strain HB8. Cells were fixed in os­mium tetroxide, em­bedded in Epon, sec­tioned, and stained with lead citrate and uranyl ace­tate. The photograph was taken using a JEM lO­OU electron microscope at a magnification of 15,000×. The bar indicates 0.5 µm. Source

Severinov's team isolated phages from environmental samples and compared the viral sequences to corres­ponding spacers in Thermus CRISPR arrays from all sites. Strong correlations meant that these strains had been previously infected by local phages. Prior to this work, over 100 Thermus phages had been isolated, and eight complete genomes were available on GenBank. This study added five complete phage genomes to the list, three from Mount Vesuvius and two from El Tatio. When these five genomes were added to the reference data­base, the percentage of unique Thermus spacer matches to phage sequences nearly doubled, providing evidence that phages are under-sampled and under-studied in such contexts.

Before comparing CRISPRs in their samples, the team first sought out Thermus CRISPR spacer information in a publicly-available genomic database. Using a cutoff of two mismatches max, this preliminary analysis found 1567 unique spacers among Thermus isolate sequences. Many of the CRISPR spacers were distinct, as expected, and most of these were specific to the strain in which they were identified. Sometimes identical CRISPRs ap­pear in different organisms – not due to shared history but rather independent acquisition. This was the case with seven pairs of shared spacers found to overlap or in different types of CRISPR arrays. Of these Thermus spacers, 31 of them – or 2% – were found in more than one genome.

In contrast to the reference database, the diversity and number of CRISPR spacers identified in this study from environmental samples were much higher: 7246 unique Thermus spacers were recognized with only about 1% similarity to those in the database of sequenced Thermus isolates. Resampling of sites revealed spacer stability over time, with 37–49% of spacers shared between samples collected 27 months apart from Termas del Flaco, and 36–63% shared between samples collected 4 years apart at Mount Vesuvius. What truly stood out and surprised the team, however, was that spacers were common between remote sites.

Were these spacers acquired independently? This explanation appears the most likely, but the order and number of shared spacers precludes the chances that this occurred, especially for all of them. Two other thermophilic microbes, Sulfolobus solfataricus from Italy and Yellowstone (USA) and S. acidocaldarius from Japan and Yellowstone, have shown similar patterns of shared CRISPR spacers (56% and 95%, respectively).

So, what's happening? Is an airborne mechanism transporting DNA thousands of miles across earth and ocean alike, some sort of "air bridge" as the team suggests? Are these fastidious or­gan­isms hopping aboard phoenix-like birds and traveling from hot spring to hot spring? One thing is certain: Thermus bacteria are picky about where they live, and they sure aren't hiking from South America to Russia with a little holiday in Italy along the way. High homology between the newly annotated phage from this study and previously isolated phages (in some cases >80%) may con­found the results and assumptions based on spacer similarity, but multiple identical spacers de­veloping in the same order in Thermus from geographically-distant hot springs or hot gravel indi­cates something major. The team presumes that some extensive migratory pathway allows these bacteria and corresponding spacers to travel long distances. This still leaves questions unanswered. What do you think? 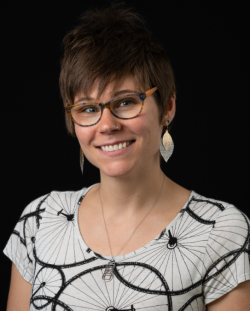