We resume our custom to list the posts from the last half year, lightly annotated. 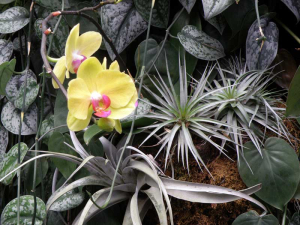 Inside Earth, Microbes Approach  Immortality  Jennifer Frazer kindly let us reprint an article from her delightful blog "The Artful Amoeba". She talks about microbial life at great depths and with great depth.

A "Cultural" Renaissance  U. of Arizona's Paul Carini revisit "the great plate count anomaly" (that is, we don't know how to nurture most bacteria in nature) and proposes that we are in the midst of a significant upheaval in microbial ecology. But this is not without cost ("it's like driving a Ferrari from the list of its components," Paul says). He helps us think why and how to renew our interest in cultivation. 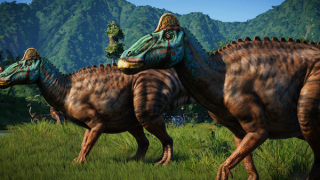 Go Ahead, Prove that Eukaryotic Cells Arose Via En­do­symbiosis  Take a yeast cell mutant that cannot grow on simple sugars and introduce into it an E. coli that can (but itself cannot make a required vitamin). Obviously, they can only grow if together. Is this an example of eukaryo­tic cells arising, Elio asks?

Happy Birthday LTEE!  It stands for E. Coli Long-Term Evolution Experiment, the Richard Lenski's lab 31-year-old which, as Roberto explains, has shed considerable light on our understanding of bacterial evolution.

The Complex and Mysterious Red Queen  Jamie borrows from Alice in Wonderland to explain how a worm (C. elegans) and pathogenic bacteria (Bacillus thuringensis) adapt to one another. Meet "recurrent selective sweeps" and "frequency dependent selection", concepts well worth learning about.

A Whiff of Taxonomy – Cycloclasticus  Here is a bacterium with rare talents for digesting poly­cyc­lic aromatic hydrocarbons. A related clade is a symbiont of deep-sea mussels but, alas, these can­not degrade PAHs. Christoph delves into this unusual and fascinating subject.

Genome with the Wind: CRISPRs reveal unknown dispersal mechanism  Jaime Zlamal, a post­doctoral researcher at La Jolla's Sanford Burnham Prebys Institute tells us of a strange finding: CRISPR sequences of widely geographically separated strains of Thermus bacteria are similar. How come? Did these sequences travel by air? If not, how? Sensing Quorum Backwards  As Elio  explains, maize beetles need to acquire a bacterial symbiont anew at every generation. The symbiont needs virulence factors to become established but later on, must turn them off. Quorum sensing is afoot.

Salamalga  Jamie toys with her new term to designate the intimate symbiosis between a sala­man­der and a green alga. It's harder on the algae than on the salamander, it turns out. Find out why and how.

Prokaryotic Pointillism: When a Sea Sponge Endosymbiont Paints the Bigger Picture  Our newest associate blogger, Janie Kim, deals with a bacterial endosymbiont of sponges that endows its host with protective chemicals in exchange for required amino acids and cofactors. Tit for tat.

Phage Therapy – an Update  The 100-year-old attempts to use phages to treat bacterial infec­tions have gained much currency now that bacterial resistance to antibiotics has become rampart. Elio discusses this challenging topic.

Dental Care for Your Pet: For Their Health and Yours  Canisius College pre-vet student Meag­han O'Neill considers the role of Capnocytophaga canimorsus in canine oral plaque and periodon­tal disease. She proposes investing in doggie toothbrushes.

The Fires of Saint Anthony – A Snippet  Ergot, an alkali-laden parasitic fungus of cereals, has wreaked havoc in the Middle Ages, casing burning sensations and madness. Roberto says that this is another example of microbes influencing human behavior. 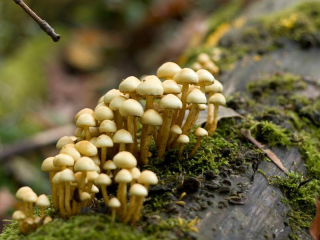 How is Light Made? – A Snippet  The genes involved in making light are known for luminescent bacteria but, heretofore, not for fungi, Elio points out. The author of a paper that describes one such system say "…the fungal bioluminescent system presented here is a mo­le­cular playground holding numerous opportunities for basic and applied research."

Fungomania 1. Who's The Biggest?  A honey mushroom colony may be enormous but the lar­gest living organism it ain't. That honor goes to a stand of aspen trees.

Fungomania 2. Hyphal Comings and Goings  Hyphae are the conduits of water and solutes in mycelium, but, surprisingly, they don't all do the transporting in the same direction.

Fungomania 3. Farming and Alcohol  Fungus cultivating bark beetles use ethanol made by the decomposition of tree material to selectively inhibit undesirable fungal species. 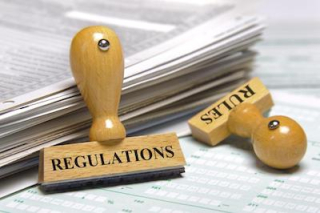 Let's make some more tyrosine, together! (part 1)  Weevils nurture an endosymbiotic bacte­ri­um called Nardonella that, as Christoph explains, is good at making tyrosine. Why tyrosine? Well, this is a key component of the weevils' cuticles. But there is much more to this symbiont, which required penning a second part.

Nano Pétanques – A Snippet  Christoph examines the rules of the game involved in viral capsid assembly, among others.

Escape From the Wall  Roberto looks at fascinating examples of bacteria without wall, be they the venerable L-forms or the newly described S-cells formed when Streptomyces are stressed.

Blown Out of Proportion – The Role of ppGpp in Balanced Metabolism  Wash U.'s Petra Levin's grad student Elizabeth Mueller and postdoc Corey Westfall discuss its role in the stringent respon­se and beyond. What are the protein targets of "magic spot", as it was called by its discoverers? Read and find out.

The Pyrenoid – Not Your Average Cookie-Cutter Organelle  Janie introduces us to a major CO2-fixing organelle, the pyrenoid, that, surprisingly, is not surrounded by a lipid bilayer. Well worth becoming acquainted with.

The world of small RNAs and regulatory peptides in prokaryotes Microbiologist Matthias Gim­pel from Berlin's Technical University introduces this blog to the wonders of small regulatory RNAs and peptides and how one should think of them.

Risks and benefits of workouts while fasting (part 1)  This two-part account allows Christoph to jump into the complex physiology of "deeply starving" Bacillus subtilis and, thanks to environmen­tal metagenomics, to its relevance to the real world, especially to the endlessly fascinating peat bogs (part 2). 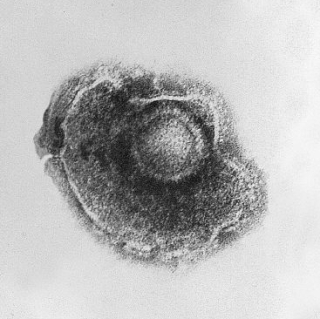 Structure of chickenpox virus. They have a lipid envelope. Source

Distributed virusing?  Jamie strains our credibility by telling us of a plant virus (faba bean necro­tic stunt virus) that is made up of 8 segments, each of which is packaged in a capsid of its own. Beats the influenza virus, whose 8 segments reside in the same capsid.

Bacterial Fitness  A strain that can outgrow a relative is said to be more fit. Elio expounds on this.

Moonlighting  Not a bad term of Christoph's for multifunctionality, a widespread and exciting property of many bacterial enzymes.

Colicins, Bacteriocins, Pyocins and Tailocins  Roberto explains the history of the exciting uses for phage tails without the phage. 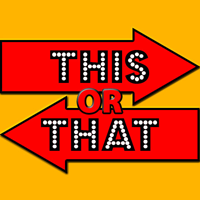 The Vicissitudes of a Talmudic Question  We are not always sure if a question is suitably Talmu­dic. We thought we should share with you an example of what goes on behind the scenes.

My Two Years in Copenhagen…  Elio reminisces about his two years as a postdoc in his favorite city.

Sydney Brenner (1927–2019)  A giant among the founders of molecular biology, Brenner also left us witty writings, an example here reprinted.

Geography and Geology  Elio is overjoyed about the width of the gulf between field biologists and bench experimentalists becoming reduced.

Chinese Surnames in Science  Elio points out that the astounding proliferation of research ar­ticles by Chinese authors poses a problem of unfamiliarity to Western ears (and vice versa). He proposes that learning something about features of Chinese surnames may help.

The Story of Free Use GFP (fuGFP)  Nick Coleman and Mark Somerville, Australian microbiolo­gists, wanted to use a superfolder GFP for their work but found that it had been patented. They got around it by modifying the protein and making it even brighter and... freely available to all comers.

Turdopoiesis  Elio toys with the charms of feces.

#162  Can you imagine a eukaryotic virus that can infect a bacterium or an archaeon?

#164  On Earth, L-amino acids in proteins go with D-ribo- or D-de­oxy­ri­bo-nuc­leo­tides. At which point in time during the evo­lu­tion of liv­ing sys­tems was the de­ci­sion made to make use of only one of the enan­tio­mer pairs?

#165  Describe the properties of a yet-to-arise new DOMAIN of life.