This is the tale of the tail, of a phage. Years before Alexander Fleming's chance discovery of penicillin, many scientists were already interested in bacteriolytic activities. Bacteriophages played a big role in the early days of searches for bacterial killers. Felix D'Herelle's 1917 discovery of bacteriophages was preceded by a report in 1896 by Ernest Hankin of a filtrable agent found in Ganges River water that killed Vibrio cholerae. Then, of course, there was Frederick Twort's 1915 publication describing a filtrable agent capable of lysing staphylococci. But Twort favored the explanation that this lytic activity was an enzyme and thus D'Herelle did not buy into the idea that bacteriophages were widely distributed. But a few years later, a lesser known player, André Gratia, became fascinated with bacteriolytic activities. Gratia put two and two together and nicely showed that Twort's activity was indeed due to a bacteriophage.

Gratia's interests in bacteriolytic activities led him to develop key rapid screening techniques for detecting them. Soon, he realized that there were not only bacteriophages, there were also proteins able to kill bacteria. In 1925, Gratia published the beautifully titled and stunning article: "Sur un remarquable exemple d’antagonisme entre deux souches de colibacille," wherein he describes "factor V," made by one strain of "colibacille" (nowadays known as Escherichia coli) and capable of killing another strain of the same species. Remarkable as this discovery was, it was not until 1946 that Pierre Fredericq, a student and long time collaborator of Gratia's, would come up with the term "colicin," to describe highly specific antibiotic substances made by some strains of E. coli capable of killing other strains of E. coli. 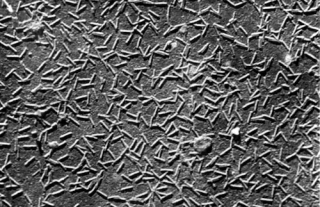 Other investigators became interested in colicin-like substances made by other bacteria. Quickly it became apparent that one could purify such specific killing substances from many species. Funny thing was, in most cases, their synthesis was induced by the very same treatments that induced the production of bacteriophage from lysogens, for example UV light or DNA damaging compounds. This led none other than Francois Jacob (along with Lwoff, Siminovitch and Wollman) to propose, in an article entitled "Définition de quelques termes relatifs a la lysogénie," the term bacteriocin to describe bacteriolytic proteins such as the colicins whose synthesis, much like prophage induction, kills the bacterium producing it. They clearly saw a connection between bacteriolytic proteins and bacteriophage. But alas! Nowadays, the term bacteriocin is much more loosely used because we now know that there are many proteins made by bacteria with antibacterial activity but whose synthesis is not lethal. But, the story goes full circle because there is still a connection between some bacteriocins and bacteriophage…

Soon after defining the term bacteriocin, in 1954, Jacob discovered a killing substance from Pseudomonas pyocyanea (now known as Pseudomonas aeruginosa). Following the bacteriocin naming convention, Jacob called this substance pyocin. Since then, several  pyocins have been described. But some of them, including the one originally discovered by Jacob, are particularly remarkable because they constitute that connection between bacteriocins and bacteriophage. As soon as people began purifying and characterizing pyocins it became clear that they were "weird." They were of extremely high molecular weight. But, most amazingly, when imaged under the electron microscope in the 1960s, they looked just like bacteriophage tails!

Eventually, it would be shown that pyocins were indeed phage tails, encoded from chromosomal gene clusters that were the remnants of prophages, now dedicated to synthesizing killer tails. For years they continued to be called pyocins but, as more and more examples from different species were identified, Jason Gill and Ry Young in 2011 proposed the term "tailocins" to describe the killer tails. The term seems to be catching on though not completely, pyocin is still widely used. Of course, this wonderful evolutionary co-opting of parts of a bacteriophage to yield a killing substance has not escaped our attention here at STC as Merry twice described the actions of tailocins in the past (see here and here). So, there you have it, the details of the tale of the killer phage tails through the trail of how they got their name.