A Sulfur For An Oxygen

A Paradox, a Paradox, a Most Ingenious Paradox...
—Gilbert and Sullivan's Pirates of Penance

Tampering with the chemistry of our holiest of molecules may seem sacrilegious, but it is wide­spread and conspicuous. In fact, DNA modifications abound. Think, for starters, of DNA methyla­tion, which is the main tool of epigenetics, or an even longer known modification, the DNA gly­co­sylation that in some phages protects their DNA from degradation by the host. Such modifications play key roles in regulation and protection of the molecule yet, remarkably, do not impair the co­ding and base-pairing abilities of DNA.

Just as disrespectful is the exchange of an oxygen in DNA for a sulfur atom in the phosphate backbone. You have now produced a phosphothiol, or, if you like it longer: phos­phorothioate. Note that sulfur and oxygen atoms have a kinship. Sulfur is just below oxygen in the periodic table and the two have similar electron configurations. Consequently, H2O and H2S are both used, albeit by to­tally different organisms, for autotrophic carbon fixation.

Phosphotiolated DNA (PT-DNA) is commonly found among bacteria and archaea. It was originally discovered in a species of Streptomyces, later in many others. This is sort of "Life imitating Art", as phosphothiolation (PT) was first developed artificially to sta­bilize oli­gonucleotides against nuclease activity. It was later found that this happens naturally and that bac­teria and archaea are capable of phosphothiolating (PT'ing). Diverse species can do it, including marine and soil-dwellers, pathogens and saprophytes, aerobes and anaerobes, and so on. As an example, about half the strains of pathogens such as Clostridioides difficile and Mycobacterium abs­cessus have this modification. 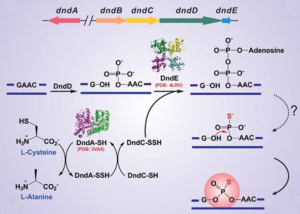 Figure 2. Proposed biochemical pathway of DNA PT modification. PT modification, con­fer­red by the DndACDE proteins, is predicted to start with the removal of sul­fur from cysteine by DndA (Bottom left). The sulfur atom is then transferred to the target DNA site, which is cleaved and ac­tivated, likely by DndD and DndC, to complete the sulfur incorporation. Source

As an aside, the story of the discovery of PT-DNA is worth recounting. In the 1980's, Zhou el al. had a hard time ob­taining undegraded DNA preps from Streptomyces using agarose gel elec­tro­phoresis. They figured what caused it: it was due to the sensitivity of modified DNA to an acid formed in the anode from the Tris buffer used in electro­phoresis. Who would have thought? When they switched to HEPES buffer, the problem went away. In the process, they discovered DNA phosphothiolation.

Nowadays, PT modifications can be determined by the use of a highly sensitive LC-MS/MS technique that iden­tifies two-nucleotide sequences of PT-DNA. The pro­por­tion of bases that become so modified hovers around 5 per 10,000 nucleotides, depending on the species, which is quite infrequent as DNA modifications go. One recent analysis revealed that in Vibrio species, PT occurs in three distinct frequencies (2–3 per 103 nt, 3–8 per 104 nt, and 1–6 per 106 nt), the meaning of which is as yet obscure. However, it suggests that PT may play a role in restriction-modification, a point that is discussed in some detail in this paper.

The actual bases modified vary, usually being a a G or, more rarely, a C, or an A. Some species pre­fer G in GT pairs, others G in GA pairs, and yet others in both dinucleotides. The target sequen­ce of the DNA that is recognized differs among species. For example, it is GAAC in E. coli, GGCC in Streptomyces lividans, GGCC and CGGCCG in Vibrio. All are palindromes. In general, the level of mo­dification found is lower than the number of the corresponding sequences. A study of the ecolo­gi­cal distribution of the PT'd sequences of the genomes found in oceans tells that different PT con­texts may well vary with the habitat. 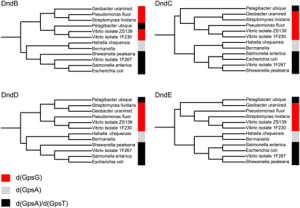 In bacteria, PT'ing activity is encoded by a five gene cluster, dndA-E. One of its products, DndA is a cysteine desulfurase (an enzyme that removes the sulfur atom from cysteine) that assembles DndC into a DndCDE complex and endowes it with an iron-sulfur cluster (DndCDE-FeS). These proteins carry out the subsequent steps of cleaving the DNA and incorporating the sulfur atom. The process requires energy, which is supplied by ATP. It is worth noting that the Dnd cluster is carried on mobile elements as a genomic island, suggesting that it is likely to be transferred between species horizontal trans­fer (see Fig. 3).

Why PT'ing? What are its physiological functions? I pre­sen­ted above the suggestion that PT'ing may play a role in restriction-modification. Nevertheless, other data seems paradoxical. On the one hand, PT protects DNA from nucleases, which, incidentally, has the practical use to keep artificial antisense oligonucleotides from becoming digested in a host. But in vivo, PT renders Salmonella enterica DNA unstable after oxidative stress, that is, by the action of hypochlorite or H2O2 (keeping in mind that nucleases and oxidizing compound act very diffe­rent­ly). Sensitivity to oxidation agents is due to the changes in redox and nucleophilic properties of the DNA backbone.

But there is more to it. Upon PT'ing, catalase-deficient E. coli mutants become resistant to the ac­tion of H2O2, which may seem paradoxical. How to reconcile these two facts? Which is it, does PT enhance or decrease resistance to oxidation? A recent paper suggests an answer. The complex of the proteins DndCDE involved in PT'ing binds strongly to PT-DNA and, in the process, becomes a catalase that protects PT-DNA from damage by H2O2. All three proteins of the DndCDE complex are involved and depend on the iron-sulfur cluster in DndC, a point that is discussed in detail in the paper. This is a short-lived activity, as this Fe-S is susceptible to damage by H2O2. But it suffi­cient to keep the catalase mutant of E. coli going.

So, the conclusion is that PT does both. It makes PT-DNA susceptible from oxidative damage and, in a catalase mutant, it protects the DNA by the catalase ability of the proteins involved in PT'ing. It depends, therefore on the conditions and on the strain. But you've heard this before in the micro­bial world, no?