Are all stresses oxidative stresses?

I have a confession to make. I get stressed. A lot. I think I've spent the better part of the last three years with the vague feeling I'm forgetting something really important. I bet there are a few people in the reading audience that can sympathize – it seems to be a pretty common experience for as­sis­tant professors. The stressors come from all sides – pressure to secure grant funding, adminis­trative responsibilities, the constant stream of email, teaching and students, trying to find time to write that manuscript you've been putting off, and it all has to be balanced with the competing de­mands of your personal life. It all piles up on you in a big suffocating mound of stress and anxiety.

Or at least that's how I would have described it a few months ago. But a funny thing happened – around the first of the year, like many others, I decided to focus on my health and started a re­gu­lar workout routine. Four days a week, an hour of weights or cardio. And crazy thing, it was like the stress melted away. Nothing else changed – if anything, the time demands were made slightly worse by devoting four hours a week to a new pursuit – but despite the continuing pressures of academic life, I felt a lot better. Which sort of makes you wonder – was that long list of responsibi­lities actually the cause of my stress, or was it really all just because I was sitting down all day?

Bacteria get stressed, too. They obviously don't have to write papers or grants, but they do have to make a living in some pretty unpleasant places. Because they have limited ability to control where they are, they often find themselves in places where temperature, pH, or other environmental pa­rameters are outside of their optimal "happy zone." They also often find themselves confronted with antimicrobial chemicals that inhibit or attack critical points in their metabolism, like when we try to kill them with antibiotics.

When bacteria get overstressed, they often die. We've studied the mechanisms of death in great detail, and there are particular kinds of damage asso­ciated with different stressors. For instance, high temperature stress is associated with protein denaturation whereas osmotic stress is asso­ci­a­ted with membrane failure. Antibiotics usually have very specific molecular targets, and the most common drugs that kill bacteria (as opposed to just slowing them down) either inhibit the forma­tion of the cell wall causing the cell to explode, or else interfere with protein synthesis and create lethal mischief with the cell's metabolism. 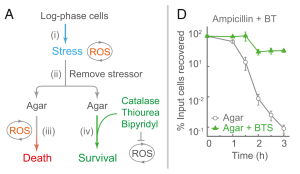 Figure 1. A Assay design. Cultures were stres­sed, the stressor was removed, and cells were plated on agar contain­ing/lacking agents that interfere with ROS accumulation; then cfu was determined. D Ampicillin-stimulated PSD. Wild-type strain 3001, treated with ampicillin (2.5 MIC) in the presence/absence of bipyridyl (0.4 MIC) plus thiourea (0.45 MIC) (BT). Cultures were plated on agar containing/lacking the bipyridyl-thiourea combination plus suc­rose (BTS; n = 3). Source

But what if these stressed-out bacteria are like stressed-out professors, and these many apparent mechanisms of cell death are actually all manifestations of a single, sim­ple underyling cause? That's exactly the thesis that is pre­sented in a recent paper by Yuzhi Hong and co-authors. In this study, Escherichia coli cells received lethal expo­sure to a variety of different stressors: three antibiotics with completely different mechanisms of action, heat shock, and a mutation that prevented DNA synthesis at elevated temperature. At several time points following exposure, samples of cells were taken and the stressors were removed, either by thoroughly washing the cells to remove antibiotics, or by returning the cultures to lower temperature. As expected, when the cells were diluted and plated on regular agar, there was a clear decrease in the number of surviving cells as exposure times increa­sed. However, if the cells were instead plated on agar containing thiourea or catalase – reagents that remove reactive oxygen species (ROS) like hydrogen peroxide (H2O2) from the media – the lethality of all the stressors was reduced by at least an order of magnitude, and in some cases protection from ROS apparently eliminated the ability of the stress to kill the cells at all.

Hong et al.'s conclusion was that the main way that these stresses kill bacteria isn't the primary damage targets we usually look at, but rather a single, secondary stress – oxidative stress – that is initiated by the first stress. Oxidative stress occurs in metabolism when electrons are placed onto oxygen molecules instead of whatever compound they were supposed to go to, yielding ROS that can cause lethal modifications to other cellular molecules. Importantly, some ROS are free radicals that are able to create more radicals via chain reactions, explaining how ROS created by a primary stress can then amplify themselves and continue to damage the cell even after the first stress is removed. It's clear that the primary stress also damages the cells, because when Hong et al. expo­sed mutant E. coli that lacked the genes for repairing the injuries caused by the primary stressor (for example, DNA strand breaks), removing ROS wasn't able to save the cells any more. But it's also clear that ROS accumulation after stress is a major factor in transforming damaged E. coli cells into dead ones, regardless of the nature of the primary stressor.

Hong's paper is the latest in a slow-motion debate in the literature dating back to a 2007 paper in Cell from Kohanski et al. showing evidence for accumulation of hydroxyl radicals – the most lethal of the ROS – in E. coli treated with diverse lethal bactericidal antibiotics, but not in cells treated with non-lethal bacteriostatic antibiotics. Kohanski et al.'s paper was instantly controversial and spawned a number of studies casting doubt on the premise that ROS were involved, much less the primary mechanism of killing by antibiotics. For instance, papers by Keren et al. and Liu and Imlay, published back-to-back in Science in 2013, raised a number of serious concerns with the ROS hy­pothesis, such as the fact that antibiotics are still lethal – and in some cases more lethal – in anae­ro­bic environments, where ROS cannot be formed due to the absence of oxygen. 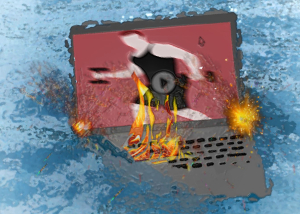 Dropping your laptop in the bathtub is a sure-fire way to experience the power of loose elec­trons. (Artwork by Sarah J. Ad­kins)

Despite 12 years of back-and-forth, I doubt this debate will be resolved by this latest work by Hong and cowork­ers. Myself, while I admit that it has its problems, I like the ROS idea for two reasons. First, it neatly fits my oversim­pli­fied mental picture of the careful balance in metabo­lism between energy harvesting and stress. As a human who has grown up in a world powered by high-energy electrons channeled into carefully-constructed circuits to generate wonders (like the machine you're reading this blog on), I can't help but compare the energy-generating flow of electrons in cells to that in our technology. Like an electronic device, cellular metabolism requires the care­ful and extremely precise shuffling of electrons to achie­ve the system's goals. But this precise electron flow is vulnerable to basically any mechanical per­turbation of the system – whether hitting a computer with a hammer, or mangling cell envelopes or proteins with antibiotics – and once the electrons get out of their proper channels, havoc en­sues. Imagine dropping your computer into a bathtub you're sitting in (Fig. 2) – when the physical mechanisms of cell or computer are taxed, electrons "leak" into places they aren't supposed to, leading to damage. Ouch!

The second reason I like the idea that ROS are an important component of antibiotic lethality is that I've seen similar things in my own work, in a completely different system. My lab studies the marine cyanobacterium Prochlorococcus, which we've shown has to live around other bacteria because it doesn't have the ability to remove ROS from the environment by itself. Under normal atmospheric conditions, there are enough ROS in the seawater where Prochlorococcus lives to kill it if it didn't have these bacterial "helpers" around. We did some experiments that showed that ROS removal was solely sufficient to explain this "helping" effect (Morris et al., 2011), but it's interesting to note that the presence of bacteria also protects Prochlorococcus from every other stress that we and others have thought to look at. There are published studies showing that bacteria protect Pro­chlorococcus from heat, cold, ocean acidification, and light starvation (Ma et al., 2018; Coe et al., 2016; Hennon et al., 2018), but anecdotally, I can tell you that bacteria also protect Prochlorococcus from high light, high pH, changes in salinity, temperature shifts even within their "happy zone", and even subtle differences between batches of culture media. Do all of these conditions lead to ROS production? Based on the "laptop in the bathtub" metaphor, maybe so. Prochlorococcus doesn't have many of the sensors for detecting environmental change found in other bacteria, so it is possible that all of these conditions can lead to relatively small primary damages that then yield self-amplifying and ultimately lethal oxidative stress in the absence of its bacterial helpers.

It's an interesting thing to think about. Obviously, if ROS are a major player in how antibio­tics kill bacteria, then it means blocking bacterial ROS defenses would be a good way to enhance antibio­tic therapies. But if all (or at least many) stresses are ultimately oxidative stresses, it will mean we need to focus more on the off-target electron transfers that occur in damaged cells. Are they all related to canonical electron carriers like NADH, as suggested by Kohanski back in 2007? Or are there other currently unknown mechanisms? There are so many possibilities, and I'm sitting here thinking about doing all of the experiments myself, and starting to feel a little stressed again – maybe it's time to stop blogging and get back to the gym…

Ma L, Calfee BC, Morris JJ, Johnson ZI, Zinser ER. (2018). Degradation of hydrogen peroxide at the ocean's surface: the influence of the microbial community on the realized thermal niche of Pro­chlorococcus. The ISME Journal, 12, 473 – 84. PMID 29087377 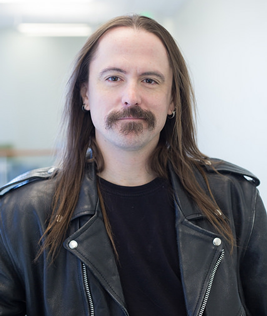 Jeff Morris is Assistant Professor at the University of Alabama, Birming­ham. His research interests are pretty much coterminous with those of Morrislab. He's also very interested in the history of the human species, and suspects that if he had it all to do over again he might have chosen to study molecu­lar anthropology instead of microbiology.