Worry not, this is no lengthy contemplation on the use of classical Latin in scientific language. It's a not-so-short piece to emphasize that it makes sense to mark the ends of non-branched polymers like DNA and RNA, and thereby define their chemical directionality. Bioinformaticians who routine­ly work with DNA and RNA in fasta or 'plain text' format might eventually come up with the idea that explicitly marking the 5'- and 3'-ends of nucleic acid polymers are somewhat baroque decora­tive elements, more a sort of traditional thing. Not exactly. The markings bear witness that bioche­mi­cal experiments and not theoretical considerations or formalisms led to their definition. The 5'- and 3'- marks are omitted in nucleic acid fasta files since we have tacitly agreed on the Western writing direction, from left to right, from top to bottom, and having the 5'-end as the first letter in line one (similar to the 'initials' in medieval manuscripts). But only because of the experiments made by biochemists in the 1960s, we can today easily and without thinking upload nucleic acid sequences in the fasta format to any "online translate" tool and obtain unambiguous amino acid sequences in the three possible reading frames, with the amino-terminus (NH2-terminus, N-term) corresponding to the 5'-phosphoryl end (5' –P, "P" short for phosphate), and the carboxy-terminus (COOH-terminus, C-term) to the 3'-hydroxyl end (3' –OH) of the input nucleic acid sequence, and, by checking the "reverse/complement" option, also get translations of the complementary strand, because Watson&Crick. By the way, the "prime" in 3'- comes from the canonical numbering of the C atoms of the (deoxy)ri­bose moiety in nucleotides.

Now, any effort to even briefly recapitulate what happened in molecular biology at the beginning of the 1960s would bust a blog post (but see here for a tour d'horizon by Matthew Cobb (Open Ac­cess PDF). I just want to point out what was not known back then, maybe speculated about, but not proven. There were hints that DNA polymerases synthesize new DNA strands using the anti-parallel, complementary strand as template, and contiguously, that is, without "template switch­ing". Not known was whether the synthesis of new DNA strands occurs in 5'→3' or 3'→5' direction. The former turned out to be the case, and the latter is thermodynamically unfavorable, as is nicely explained by Allen Gathman in this video clip on YouTube. Also, it was not entirely cer­tain in which direction RNA polymerases transcribe DNA to RNA, including messenger RNA (mRNA). And, last but not least, it was not known in which direction ribosomes "read" messenger RNAs during their translation into polypeptides. Note that a directionality cannot be unambiguously deduced from the famous "Poly-U assay" of Marshall Nirenberg and Heinrich Matthaei, who found that poly-U (artificial mRNA) directs the synthesis of poly-Phe (oligopeptide). 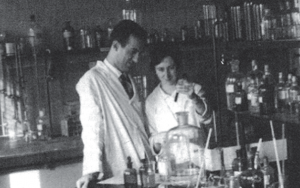 Enter Margarita Salas, working as a post­doctoral fellow in Severo Ochoa's lab at the NYU School of Medicine, New York, during the mid-1960s. In 1959, Ochoa had been re­warded the Nobel prize in physiology jointly with Arthur Kornberg "for their discovery of the mechanisms in the biological synthesis of ribonucleic acid and deoxyribonu­cle­ic acid", and was, at that time, fiercely competing with Nirenberg & Matthaei, and Har Gobind Khorana for "sol­ving" the genetic code. By 1966, the NIH declared the ge­netic code "cracked", and it's a Monty Python-type foot­note that the last "solved" codon, in 1967, turned out to be the UGA (opal) "nonsense" or stop codon.

A brief detour for all readers interested in the present (necessary) debate of 'Women in STEM': Margarita Salas, 24-years old and a newly minted PhD, had come to New York in 1964 together with her husband Eladio Viñuela, like her a studied bio­che­mist, and both worked on different topics in Ochoa's lab for three years. During this time, both developed a penchant for molecular biology and continued on this route, after their return to Spain in 1967. A bumpy road, because there was virtually no molecular biology research in Spain at that time, and they had to start from scratch, both with setting up a lab and with raising funds. Since they saw no chance to compete with leading molecular biology labs in the US, Japan, and Eu­rope, they decided to develop Bacillus subtilis phage ϕ29 as a model system. From the early 1970 on, Eladio focused his research on African swine fever virus (ASFV) with the explicit aim of pre­vent­ing Margarita's contribution to research on ϕ29 from being ascribed, quite "naturally", to him – machismo was prevalent in Spain at that time, including science, of course. When Eladio Viñuela died in 1999, the couple had, over three decades, published 60+ papers together: on their joint work as PhD students, on ASFV and on ϕ29. Margarita Salas, ennobled Marquesa de Canero in 2008 in recognition of her "entrega a la investigación científica sobre la biología molecular, realizada de forma intensa y rigurosa a lo largo de toda su vida profesional", is now in her eighties, and, yes, still working in the lab. She is the leading expert in ϕ29 biology (more on her biography here). And from the work of her lab, the elucidation of the intricate protein-primed DNA replication of this phage and the complete functional and structural characterization of the ϕ29 DNA polymera­se stand out (more on ϕ29 in Merry's Book 'Thinking Like a Phage', in which it is starring as 'Dyna­mo'). 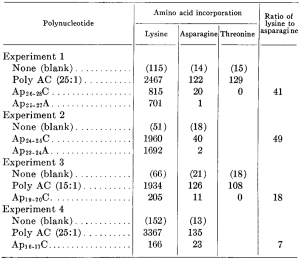 A big jump back to 1965, when the Beatles would release their song 'We can work it out!' in December. In October of this year, Margarita Salas, Severo Ochoa and their co­workers published a paper titled 'Direction of Reading of the Genetic Message' in J Biol Chem, the top biochemistry journal then. It's worth diving a little into their expe­ri­men­tal approach. They purified E. coli ribosomes based on existing protocols, which were essentially free of nu­cle­ases and proteases. Also, they obtained a cell-free centrifugation "supernatant" from Lactobacillus arabino­sus that contained the required translational initiation and elongation factors, and the aminoacyl-tRNA synthe­ta­ses. They had found in pilot experiments that "super­natants" from L. arabinosus were just as active in peptide synthesis as those from E. coli, but contained significantly less ribonucleases. The purified ribosomes together with the "supernatant" would synthesize oligopeptides when supplied with tRNAs, an energy-regenerating system (creatine kinase/creatinephosphate), and "fed" syn­thetic messenger RNA plus amino acids (the amino acid tested in a particular experiment labeled with 14C to al­low de­tec­tion). This setup was pretty exactly that of Nirenberg & Matthaei's famous "Poly-U assay". Nirenberg & Matthaei had relied, on the other hand, on a method developed earlier by Marianne Grunberg-Manago and Se­vero Ochoa to synthesize their synthetic messenger poly-U: polynuc­leotide phosphorylase (PNPase) from Azotobacter vinelan­dii is a 3'→5' ribonu­clease that can also, in the reverse re­action, act as tem­plate-inde­pen­dent 3'‑terminal oligo­nuc­leotide polymerase with ribonucleotide-diphosphates (NDPs) as substra­te, and thus synthesize poly-U in vitro. (The message here is: competition among researchers did not necessarily preclude their extensive collaboration in the 1960s.) Salas et al. em­ployed the "PNPase method" to synthe­size hetero-polymers of adenosine (A) and cytidine (C) at a ratio of 25:1, for one experiment at 15:1 (C labeled with 3H to allow its detection during prepa­ra­tion, and for not interfering with detection of 14C labeled amino acids in subsequent steps). They "trimmed" the resulting mixture of hetero-polymers by consecutive enzymatic and chemical reac­tion steps (see here for a diagram of their scheme). They size-fractionated the resulting mixture by column chromato­graphy to obtain oligo­ribonucleotides ~25 nucleotides long, with C or A exclusively at the 3'-end, that is, lacking Cs at internal posi­tions. These synthetic messengers would enable the re­searchers to detect a veritable zoo of possible products in their in vitro trans­la­tion assays, but spe­cifically those with 1. amino-terminal, in­ter­nal, and carboxy-terminal lysine residues (AAA), 2. car­boxy-terminal asparagines (AAC) in addition to amino-terminal and internal lysines (AAA), and 3. lysine (AAA), asparagine (AAC), and threonine (ACA, ACC) residues in un-trimmed Poly-AC heteropoly­mers. They could in­deed find all three types of specific translation products (see Figure 2), and summarized these findings in their paper:

1. A cell-free bacterial system with very low nuclease activity was obtained by com­bi­ning purified Escherichia coli ribosomes with dialyzed supernatant fluid obtained by high speed centrifugation of extracts of Lactobacillus arabinosus. The nuclease activity of the ribosomes was lowered by washing in ammonium chloride solutions followed by chromatography on DEAE-cellulose. The L. arabinosus supernatant is naturally almost free of nucleases.

2. Oligonucleotides of the type ApApAp ... pApApC, with an AAC codon at the 3'-end of the chain, directed in the above system the synthesis of oligopeptides of the structure Lys-Lys-Lys ... Lys-Asn with NH2-terminal lysine and COOH-terminal aspa­ragine.

3. The results show that if the biological assembly of the polypeptide chains of pro­teins proceeds, as currently believed, from the NH2-terminal through the COOH-terminal amino acid, the genetic code is translated by reading the messenger in the direction from the 5'- to the 3'-end of the polynucleotide chain.

When Salas et al. wrote their paper, they came to know – and cited – unpublished work ('in press') by the labs of Gunter Stent and Jerard Hurwitz, so that they could conclude with two sentences that you find in any molecular biology textbook:

Since the code transcription step, i.e. the synthesis of messenger RNA on the DNA template, proceeds in a 5'→3' direction, transcription and translation would have the same polarity. This would permit translation to begin as soon as a few nucleo­tide sequences of nascent messenger were available.

Today, 40+ years later, there isn't much to add to these sentences except that none of them has been refuted since, and that in eukaryotes nascent messenger RNAs are trans­lated after being ex­ported from the nucleus to the cytoplasm (but see here), while in archaea and bacte­ria coupled transcription/translation is the rule. And by this, you have arrived at the 3'-end of this post: a pe­riod.

An aside. We had a poster similar to the frontpage picture in Walter Messer's lab at the MPI for Molecular Ge­netics in Berlin, Germany, where I worked, back in the last century, on DNA replication in E. coli. When new­bies in the lab asked Walter whether there's maybe a message in this poster, he just smiled. After some pon­dering, they, too, smiled... and never lost their sense of directionality again, even when working with fasta files. : )