«let not Vanity ſeduce you...»

«let not Vanity ſeduce you to perſiſt in your Miſtake»  No, it's not a spelling mistake that you see here. It's the long ſ, which was used in print well into the 18th century. And also the capi­ta­li­za­tion of nouns, unusual today, was common in 1743 when Henry Baker's treatise The Microscope Made Easy was published in London, UK. Aside from such formal trivia, the title-giving sentence is by no means moral advice, but rather a practical technical tip on the correct use of microscopes by scientists. The introduction to Chap. XV is well worth reading from the beginning (see facsimile below). Once you get into the somewhat dusty language you will appreciate the straightforward lineup of essentials for observing by the scientific method. 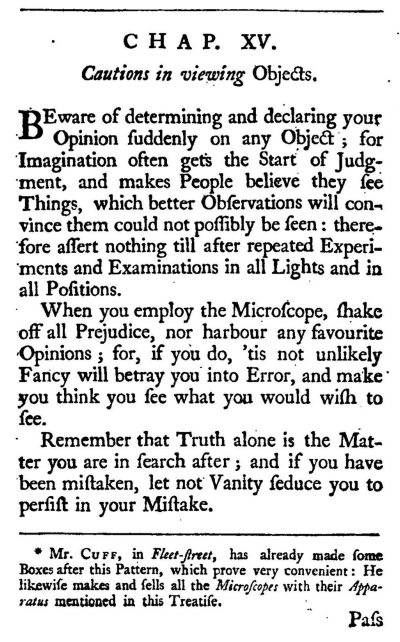 I will not let vanity ſeduce me to paraphrase Henry Baker (1698–1774), so, enjoy the origi­nal! He was a naturalist in the age of enlight­enment, and a technically skilled and inven­tive microscopist in the tradition of Robert Hooke (1635–1703), who was the first to ob­serve plant "cells" in his micro­scope. Well, it was actually Antonie van Leeuwenhoek (16­32–1723) who first saw and described micro­bial cells, which he called "Animalcules". But for documentation, all these early microsco­pists could only draw what they saw at the then available resolution, and describe that best they could only with terms taken from the voca­bu­lary of the macroscopic world (Henry Ba­ker was good in drawing, see his drawing of reproducing polyps on the front­page). Pho­to­graphy was not available to mi­cro­scopists until the end of the 19th century (see here an early photograph of Shigella), and the first meaningful electron microsco­py pictures of bacteria were published in the 1950s (see here an early EM portrait of Ba­cillus me­gaterium). Today, we have confocal laser scanning mi­croscopy, several technical approaches to super-resolution microscopy, atomic force microscopy, and cryo-electron-tomography to not only look at cells but into cells. All these techniques work with digital image acquisition, and with the capability of recon­structing 3D images. Some things have not chan­ged though. The problems early mi­croscopists had with gaining acceptance of the hand-drawings of their mi­croscopic objects are mir­rored by the difficulties today's microscopists face with having their software-driven image reconstructions accepted by colleagues.

So, you might feel left with the impression that it's mainly the resolution that has changed over the last 2.5 centuries – coming close to 'atomic resolu­tion' now. No, the most remarkable advancement in microscopy came with the possibility to record time-lapse series or even real-time videos of living cells under the microscope. Just look at  V. cholerae using its pilus to 'harpoon' DNA for uptake! Wow!