A rather specific term, trophosome refers – as per the Wikipedia – to 'an organ found in some animals that houses symbiotic bacteria that provide food for their host.' Trophé (τροφή) denotes nourishment, soma (σῶμα), body, denoting that trophosomes are intimately involved in their host's nutrition. 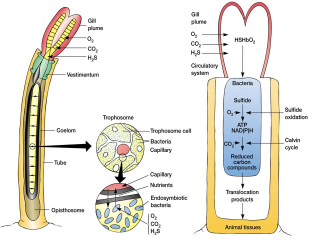 Figure 1. The Giant Tube Worm, Riftia pachyptila and its Trophosome. Source. Frontispiece: Giant Riftia pachyptila in their habitat and abyssal fauna 2,630 m below the surface on the East Pacific Rise, during Oceanographic campaign Phare. Photo by Alf Håkon Hoel. Source

Animals that possess trophosomes include the giant tube worms of hydrothermal vents, Riftia pachyptila, and marine flatworms of the genus Paracatenula among others In the tube worms, the trophosome is seen as a greenish spongy organ located in the coelomic cavity (another Term of Biology for the 'body cavity between the body wall and the intestinal canal and other organs').

The trophosome of R. pachyptila  is composed of multiple lobules that contain bacteriocytes, that is, host cells filled with bacteria (see Figure). These as yet uncultivated gammaproteobacteria obtain energy by oxidizing hydrogen sulfide spewed from the hot vent fluid. The worms possess a hemoglobin that binds H2S and, via their circulatory system, delivers it to the bacteria in the trophosome. Oxygen present in the sea water is used as the hydrogen acceptor. The bacteria chemoautotrophically synthesize compounds such as NADPH and ATP that are used to reduce the carbon dioxide. The bacteria thus supply the host with needed organic compounds either by secretion or by being digested themselves.

In the tube worms, the bacteriocytes undergo a complex cycle, with mitosis and DNA synthesis restricted to the central part of the organ. In time, these cells are transported to the periphery, where they undergo apoptosis with digestion of the symbiotic bacteria. The reason for this 'cycle with terminal differentiation' is not yet known (We will come back to Paracatenula and its symbionts in a forthcoming post). But with all the transports of chemicals and the complex reactions that are going on within, why should trophosomes be anything but elaborate intricate structures?