A Case for Colors

Last year, Gilles van Wezel and Changsheng Wu announced the discovery of a compound with a completely novel chemical backbone, Lugdunomycin. This is an exceptional feat as we hardly find compounds with completely novel chemical structures. This is even more incredible if you consi­der how it was found. Bacteria don't always produce antibiotics; they usually only do so under spe­cific circumstances, like when threatened or lacking nutrients. Bacteria can be a bit like Goldi­locks: they need just the right conditions to produce specific compounds – which requires a lot of time and experiments! When I asked the main researcher, Changsheng Wu, why this specific strain of Streptomyces caught his eye, he confided something in me: "This strain made the most beautiful pigments."

To me, this statement sounded like poetry. But Changsheng Wu is a far better chemist than I am and he was very serious about this statement. He saw the potential in a strain that is capable of producing many colors... 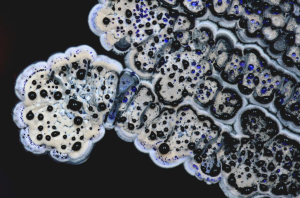 When you walk into a Streptomyces lab, you immediately notice two things. First, the strong smell of earth, caused by the molecule geosmin produced by Streptomyces. Se­condly, Streptomyces are absolutely gorgeous. These mul­ticellular bacteria develop large, fluffy colonies and often produce beautiful, bright pigments. It's not unusual to work with bright red, blue or green strains. This beauty extends to naming conventions, as a lot of Streptomyces are named after their appearance. An example of this is Streptomyces coelicolor, "coelicolor" meaning: "the color of Heaven/the Sky" (depending on how you prefer to trans­late Latin). This name refers to the bright blue pigment, actinorhodin, produced by this most studied model or­ganism.

But why on Earth would bacteria produce pigments? 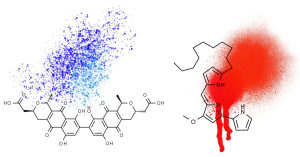 Figure 2. Actinorhodin on the left is bright blue. Prodiginine on the right is red. Both these com­pounds have several aromatic rings and alter­nating double- and single bonds. Image by the author

In order to wonder about the reason for colored pig­ments, we need to take a step back and ask what colors actually are. When we see a color, we perceive a collection of wavelengths of light. A white object reflects all colors and wavelengths, whereas the inverse is true for a black object which absorbs every color. (This is why you get so warm when dressed in black.) A colored object absorbs complementary colors and reflects only the color that we see.

To remove all the magic: When we see a color, all we see is the absence of the others, caused by a compound's in­teraction with light. This is very exciting (literally), as molecules require some complicated chemis­try in order to interact with light. Every molecule is made up of atoms that have formed bonds by sharing electrons, so every molecule has an intricate network of electrons continuously moving around. A chemical compound gets its color when the electrons absorb energy (from light) and become excited. Compounds in an excited state absorb wavelengths of the complementary color to what we visually see. In order to achieve this interaction, colored compounds mostly contain at least one aromatic ring in combination with alternating single and double bonds. Two of the most well-known secondary metabolites produced by Streptomyces coelicolor are actinorhodin (blue) and prodiginine (red), which fit this rule nicely. The function of these chemicals is not to be beau­tiful though. The blue compound actinorhodin is a polyketide antibiotic that causes redox-stress, while the red prodiginine is a DNA-damaging compound. The coloration is a side effect of their pri­mary function, but it has been incredibly helpful for us to identify these compounds.

Pigmentation of aerial- and substrate mycelia can be used for taxonomic purposes, as strains with similar colors are often related to each other. And more importantly, the production of pigments gives an indication of secondary metabolite production, among them potential antibiotics. When labs look for strains that produce new antibiotics, they isolate hundreds of Streptomyces from soil samples and screen them for bioactivity and production of compounds. But it is impossible to tho­roughly perform a chemical screen on hundreds of strains. An outstanding question in Streptomy­ces research is: "How to select the most gifted isolates for chemical screening?" This is when the colors return to the story. 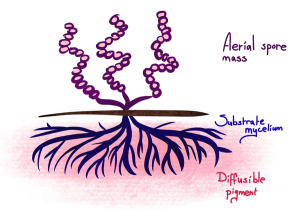 Figure 3. Streptomyces will produce com­plex mul­ticellular colonies with a few recognizable features: The aerial spore mass, substrate my­celium and the dif­fus­ible pig­ment. Image by the author

Michael Goodfellow and coworkers have isolated a large number of Streptomyces strains from Atacama Desert soil and faced the difficult question of which strains to focus on. One of their approaches was to assign the spe­cies to color-groups. The colors of the aerial spore mass, substrate mycelium and the diffusible pigment were as­sessed on several different media, as Streptomyces often produce different colors on different nutrient sources. As a consequence, some strains are part of several color groups, like the strain in the cover image which has blue spores but a pink substrate mycelium. Then, the 53 iso­lates in this study were tested for bioactivity against 6 species: Bacillus subtilis, Escherichia coli, Pseudomonas fluorencens, Staphylococcus aureus, and Saccharomyces cerevisiae. The authors showed that having a color, and especially several colors, correlated positively with levels of activity against the indicator strains. The conclusion is that isolates showing more vivid combinations of colors are more likely to pro­duce growth-inhibiting compounds. The analysis here is quite subjective though, as these colors are classified by eye. The authors suggest a standardized method in which photographs are taken and not only encompass visible light, but also by UV and infrared.

As said above, Wezel and Wu announced last year the discovery of Lugdunomycin, a compound with a completely novel chemical backbone. This compound is derived from angucyclines, mole­cules which have mainly anti-tumor activity. However, Lugdunomycin is so heavily modified that it looks nothing like an angucycline anymore – more like a helicopter! In total, this strain of Strepto­myces was shown to produce 24 variations of angucyclines, 11 previously undescribed, as well as the completely novel Lugdunomycin. This is exceptional in both quantity and quality. Imagine what else is out there! This high number of new compounds is even more implausible if you con­sider how it was found. Bacteria usually produce antibiotics only under specific circumstances, like when threatened or lacking nutrients. This makes sense – antibiotic production costs a lot of en­er­gy, which cannot be wasted. In a way, bacteria can be a bit like Goldilocks: they need just the right conditions to produce specific compounds. Finding those conditions is not trivial feat, it requires a lot of time and experiments and is difficult to adapt for higher throughput. At this point, we return to the question: "How to select the most gifted isolates for chemical screening?”. When I asked the main researcher, Changsheng Wu, why this specific strain of Streptomyces caught his eye he con­fided something in me: "This strain made the most beautiful pigments…"

What we perceive as beautiful pigmentation on Streptomyces is a consequence of sophisticated chemistry and can be an indication that a specific strain is capable of making many more secon­dary metabolites. So when you are looking for a strain that could potentially produce interesting compounds, choosing one in your favorite color is a scientifically sound decision! 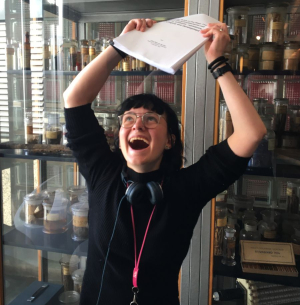 Lizah van der Aart is a Research Associate at the Centre for Cell Bio­logy at the Newcastle University. She is fascinated by bacterial cell shape and development, her research is within the scope of the Er­rington lab. She likes long walks on the beach, taking soil samples and isolating microorganisms. Her favourite color is green.