Best I can tell, the marine flatworms Paracatenula suggest a novel twist on symbiosis. Here, sym­biotic bacteria do not just provide carbon compounds for their host but actually store them. And they do that also for energy. 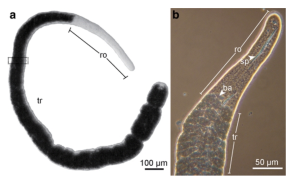 Paracatenulas are small worms only a few millimeters long that live in nutrient-poor marine environments in the sandy bottoms of semitropical shallows. We consi­dered here before. Notably, they lack both mouth and gut. They live entirely off the nutrients provided by bac­teria they carry within a specialized organ called the trophosome. The bacteria make up about one half the worm's weight.

The bacteria of these worms possess abundant white sulfur granules, the source of which is the oxidation of reduced sulfur compounds, mainly H2S. This is how these chemoautotrophic bacteria obtain energy, which they use to fix CO2 to produce compounds such as amino acids, vitamins, and cofactors for the worms' biosynthesis.

By itself, this is not an unusual arrangement, as sulfur oxidation by symbiotic bacteria is used, for example, to supply nutrients to the giant tube worms and the clams found near the deep-sea hy­drothermal vents, as well as to other gutless worms. 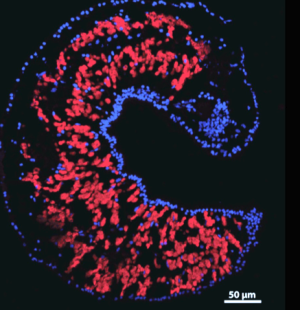 What appears to be unusual here is that the bacteria in the Paracatenulas store energy-rich compounds such as glycogen, polyhydroxyalkanoates (PHA), and the sugar tre­halose. Appropriately, these bacteria have evolved a spe­cial mechanism to deliver such compounds to the host. Thus, the bacteria function in a manner akin to our liver (think glycogen as a storage form of glucose), something that is news to me. And, when it comes to storing energy, the bacteria act as batteries.

The as yet uncultivated bacteria of one Paracatenula spe­cies, P. cf. polyhymnia have been given the provisional name, Candidatus Riegeria santandreae (after the site where they were collected, the Sant'Andrea Bay of the Italian island of Elba. Incidentally, this has nothing to do with Napoleon having been exiled there). In a recent stu­dy, these alphaproteobacteria were shown to have a re­duced genome, 1.34 MB (as compared with that of their phylogenetic cousins, which are over 4 Mb on size).

This detailed and highly sensitive genomic, transcriptomic, and proteomic analysis of single worms tells us that the genome of the symbiont, tiny as it may be, contains the genes for sulfur oxidation and carbon fixation, including the one for RuBisCO. These genes are highly expressed, meaning that these bacteria are very active in chemoautotrophy. The authors confirmed this by radio­auto­graphy of sections of the worms exposed to radioactive precursors, where the radioactivity was confined to the symbionts. Other symbionts, such as those of hot vent clams, lack a complete TCA cycle whereas these possess the entire cycle, including its feeding (anaplerotic) pathways. Besides the sulfur granules, the symbionts have intracellular inclusions consisting of glycogen and PHA.

Paracatenulas have a problem in that their source of sulfur is in the lower sediment whereas oxy­gen is found higher up, close to the water column. The worms manage this by traversing the oxic and anoxic sediment layers. A somewhat inept analogy would be a duck feeding at a lake's bottom and coming up the surface for air. 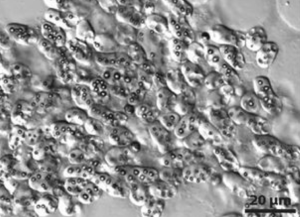 How are nutrients transported from the symbiont to the host? Active transport across the bacterial membrane ap­pears to be quite limited, so that's not the way. So how is it done? Lysis of the bacteria, which is seen in other sym­bioses, is also not used here, which is unsurprising as the worms lack lysozyme. So how is it done? The answer, it turns out, is that the bacteria make outer membrane ve­sicles (OMVs) that they eject, to be digested by the host. These vesicles carry a rich cargo of molecules, including the storage compounds. In thin sections, about half of the bacteria can be seen to have OMVs. Thus, this is an efficient mode to provide the host with its needed nu­trients.

Paracatenulas are not the only chemosynthetic creatures in the Sant'Andrea Bay. Notable is an­oth­er gutless animal, the oligochete Olavius algarvensis. In contrast, this is a host to no less than five bacterial symbionts, none with reduced genomes. The present paper gives a detailed compa­rative study of a number of other symbioses, including those in clams and the giant tube worms of the deep hydrothermal vents.

Reduced genome or not, these symbionts have the correct metabolic toolkit to do the job for their host. What is unique here is the ability of the symbiont to store energy and carbon, a skill that is usually relegated to the host.