Discovering a Novel Algal-Fungal Symbiosis
and a Humanized Journal

Lichens are said to occupy an astounding 6% of the surface of Earth’s land mass, so pay attention. As you are well aware, lichens arise by the symbiotic interaction of fungi and algae (or sometimes cyanobacteria). And as you know, they consist of separate individuals of the two partners, each benefiting from the interaction. But here is something new: the discovery of a lichen-like association wherein the algal partner becomes internalized within the filaments of the fungus. In this case, the algal cells do not lead a separate existence but instead live inside the fungal hyphae. The finding of such an intimate embrace is news indeed. In fact, this association is not quite a lichen, at least not yet, as the fungus does not form the tissue characteristics distinctive of lichens. But maybe it’s on its way to lichenization.

The alga of this unique partnership is Nannochloropsis oceanica and the fungus is Mortierella elongata. I had never heard of either of them, although they are important in biotechnology as sources of lipids and biofuels. Moreover, their genomes and molecular kits are well known. Do these algae and the fungus coexist in nature? At a glance, this may not be obvious, as the alga is a marine organism, the fungus a soil-dweller. But the two could well meet at an intertidal zone or elsewhere. Note that once inside the fungus, the algae could well survive in a dry environment.

The experiments that led to the present finding started with co-cultivation of the two organisms. The two appear to like each other because, after six days of cultivation, they are seen to adhere to each other, the algae forming dense clusters around the fungi. This get-together appears to require cellular rearrangements. The wall of the algal cell is partly broken down, extruding fibrous extensions that seem to grab the surface of the fungus. After a few weeks’ time, algal cells appear inside the fungal filaments, which is something entirely new, a photosynthetic mycelium. 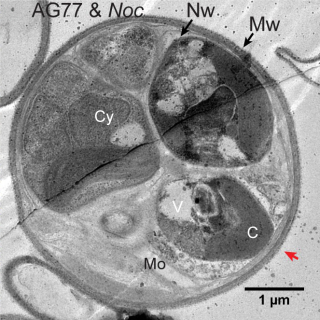 Even before this unexpected fusion, the two kinds of cells begin an active two-way biochemical conversation. Using isotope tracer experiments, the investigators showed that carbon and nitrogen are exchanged between the partners. They grew algae that were labeled with 14C-sodium bicarbonate together with the fungi and found that, after a week of co-cultivation, the label was transferred to the fungi. Likewise, fungi labeled with 14C-glucose or 14C-acetate transferred their isotopes to the algae. Nitrogen transfer was also shown by using either algae labeled with [15N]-potassium nitrate or fungi with 15N-ammonium chloride as sole nitrogen sources. The net flow of carbon was from algae to fungi, of nitrogen from fungi to algae.

These exchanges appear to be beneficial because when nutrients were scarce, the algae and fungi grown together grew better than when separated. In fact, they produced more oil when co-cultivated, with obvious biotechnological implications. Further, Mortierella only obtained carbon from living algae that attached to the fungal filaments and not from dead algae.

Note that this kind of nutrient exchange is by itself not news. Such reciprocal transfers of carbon and nitrogen have been reported, for example, for the alga Chlamydomonas reinhardtii and several yeasts and filamentous fungi. It is noteworthy that the interaction between N. oceanica and M. elongata is quite specific and did not take place with other species.

Now for the finding of the algae inside the fungi. When cultivated together for several weeks, some algal cells were seen within the fungal hyphae. According to their morphology and staining with vital dyes, the algae persisted, seemingly able to function, grow, photosynthesize, and actively divide, for over two months. However, the actual entry process of the algal cells into the fungal cells was not captured under the microscope. Neither was there evidence that the algae were transmitted via the fungus' reproductive structures. On the other hand, some reorganization is required, internalization was preceded by the formation of dense aggregates of algal cells near the hyphal surface.

Changing subjects, the article above appeared in eLife, a journal with an unsually enlightened editorial policy. They publish in toto the comments by the editorial reviewers as well as the authors' responses to them. And, if agreed by the reviewers, they disclose their names. This allows the reader not only to find out what the reviewers thought of the article, but also what went into the final published version.

In the case of this article, the comments and the responses are gigantic, no less than 20 pages and nearly 7000 words long. More than I can reasonably deal with, so I will just mention the main topic. The reviewers were excited by the basic findings but seemed concerned with the evidence for endosymbiosis. Are the two partners really alive? The editors concluded that this may well be the case. Therefore, with modifications, the article was deemed worthy of publication.

My impression is that the vast amount of work that went into the revisions resulted in a better article, therefore the effort was worth it. In addition, baring the comments and the responses makes it possible for readers of the journal to go into greater depth regarding the interpretation of the data. For those in or near the field, this is invaluable. The result is better science for all.

Some comments by Roberto

During my own editing of Elio's piece, I shared some thoughts about eLife's editorial policy among all of us at Small Things Considered. They suggested I add them here. These thoughts echo a lot of what I discussed with George O'Toole in an earlier post on publishing:

"I have a couple of additional comments regarding eLife's editorial policy, since I served as a reviewing editor for the journal during its first few years. Perhaps what I loved the most about the review process was the fact that all reviewers had an online discussion that usually meant reaching consensus prior to writing the decision letter. Those online discussions greatly improved the tone and content of the letter that the authors received. Overall, both as reviewer and author, I felt that eLife was a breath of fresh air in the scientific publishing world. I think other journals are following suit in attempting to improve the review process… So, I remain hopeful that better times should lie ahead!"