Very high on the list of this world's vital symbioses are the mycorrhizae, the association of fungal filaments with plant rootlets. About 90% of all vascular plants – from ferns on up – possess them. They contribute greatly to the health of the plants, being a major source of nitrogen, salts, and wa­ter. In return, the fungi get sugars from their hosts. The tree forests we know and love may not exist without them. So, figuring out how mycorrhizae get started is not a trivial concern. However, we have only scant knowledge of the detail of this process. Among the few things we already know is that the fungi secrete a set of proteins, the Mycorrhiza-Small Secreted Proteins (MiSSPs), that are essential for the establishment of the mycorrhizae. 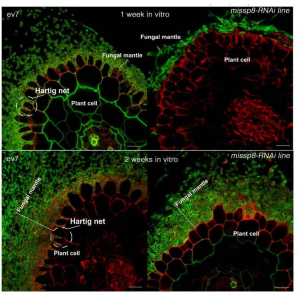 A mushroom favored for such study is Laccaria bicolor, a little mycorrhizal species common in the temperate for­ests of the world. Mycophiles can readily recognize it at least to genus, but don't much prize it as an edible as it is small and fairly insipid. Somewhat perversely, it is itself carni­vo­rous – it actually catches and kills small insects such as springtails. L. bicolor was the first mycor­rhi­zal fun­gus to have its genome sequenced and it's among the better known ones. (An aside: L. bico­lor and H. sapiens belong to different eukaryotic kingdoms yet their actin-1 proteins share ~83% identical amino acids. Actins of L. bi­color and S. cerevisiae share only ~81% identity, which is no argument for H. sapiens being actually fungi, though.) Its genome carries no less than 98 MiSSPs, but only one, MiSSP7 had been previously recognized as an effector of the symbiosis. It is secreted by the fungus and taken up into the host cell nuclei. Another such protein, MiSSP8, is a recent candidate for this activity, having been found to be highly abundant in the my­cor­rhizal root tips of Doug­las firs and cottonwoods.

In a recent preprint paper, MiSSP8, which is a small pro­tein with 50 amino acids, was discovered to be required for the early stages of mycorrhizal formation. Inhibiting its synthesis by RNA interfer­ence greatly impairs the es­tablishment of the symbiosis. Structural analyses suggest that MiSSP8 may be cleaved into pepti­des that are likely to be involved in the development of mycorrhizae. This protein is also found in the fungal fruiting bodies, where it seems to play a structural role. It is thus possible that it may have been subsequently recruited for the establishment of mycorrhizae.

Given the importance of mycorrhizae in our world, enhancing our knowledge of their molecular basis can be expected to enhance not just our basic understanding, but also propel us into ways to better grow plants. With greater plant growth expected to help in the control of climate, this is a most worthy goal.