Pictures Considered #47 : Phages in the Gardens 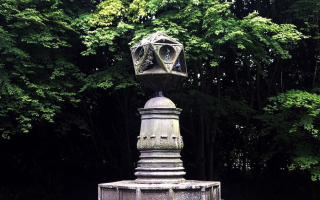 A few weeks ago, I found myself aimlessly exploring the garden of the Palace of Holyroodhouse (Edinburgh, Scotland), which has served as the principal residence of the Kings and Queens of Scots since the 16th century. Inside, one can visit the historic apartments once occupied by Mary, Queen of Scots. But it was the garden that I found most striking. I meandered about admiring the landscape, lost in thinking about the history of the place; there are reports that the garden once harbored a menagerie with a range of animals, including lions and tigers and bears, oh my! Suddenly, I came face to face with a stunning sculpture of… a phage! Or, at least, that's what I thought. "T4!" I yelled in perfect silence, bringing my stroll to an immediate halt. I was staring at a two meter tall representation of a phage particle with its characteristic icosahedral head, collar, tail and base plate. 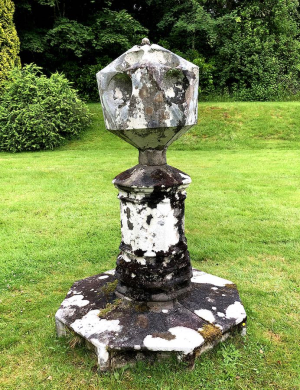 Carrying that image in mind (and in the camera), I left Edinburgh and headed north to explore the Isle of Skye, the Highlands, and one or more distilleries. Two days after encountering T4 at Holyrood, I was on another idyllic walk. This time on the grounds of the Glengarry Castle Hotel, on the shores of Loch Oich, between Loch Ness and Loch Lochy. Lo and behold! In the hotel's garden, another magnificent sculpture of a phage! This one really captivated me because not only did it represent the phage's icosahedral head on top its tail, it was covered in a marvelous melange of lichens, admittedly some of my favorite small things. Jackson Pollock could not have painted the sculpture more artfully than Nature had. "So what's with all these phage sculptures in Scotland? Such exquisite art, how come I had not heard of these before?" I wondered lost in a fantasy world. 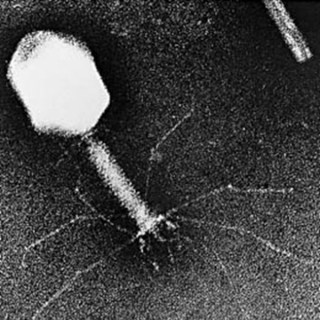 It did not take long to come back to Earth, to accept the fact that these could not be sculptures honoring the most abundant creatures of our planet. These sculptures clearly were centuries old while the earliest electron microscope images of phage date back to only the middle of last century. "What could these sculptures be?" It took very little time searching to enter the universe of sundial sculptures, an art form that seems to have had its apex in seventeenth century Scotland. These two phage-like sculptures were once elaborate sundials; two out of hundreds of sundial sculptures scattered across Scotland. My reaction: "It must be the overabundance of sunlight in these parts of the world that drove this sundial mania..." Nonetheless, for a few hours I became fully immersed in the study of the diversity of structures of these fabled sundials. I was struck by the fact that two such different routes had led to similar forms with such different functions. Evolution, after millions of years, yielded T4 as a bacterial predator. Stonemasonry of seventeenth century Scotland and the artist's creativity had yielded an icosahedral "head on a tail" to tell time. Now, here's a curious fact. After a long (though not exhaustive) search, I found only two examples of sundials with icosahedral heads. And I had literally stumbled upon the two of them in the space of two days. Moreover, I came across no other sundials. That still mystifies me. Regardless, it was wonderful to witness how my love of small things led me to consider the nature of much larger things. You live and learn.