« Another Cell Bites the Dust | Main | Who runs the world? »

The Complex Anatomy and Physiology
of the Gut of Wood-feeding Beetles. A Snippet. 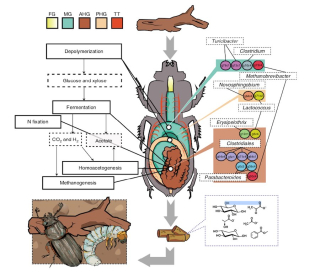 (Click to enlarge) Figure 1. Distribution of pro­cesses for the deconstruction and fermentation of lig­nocellulose in the digestive tract of O. disjunctus, and key microbial players. Passalid beetles feed on decaying wood that is sequentially transformed in the four main regions of the insect’s digestive tract. Wood polymers are pri­marily deconstructed in the MG and PHG. Depolymerization products are fermented in the AHG, where nitrogen fixation, methanogenesis and homoacetogenesis also oc­cur. Each gut region has selected for different microbial groups that contain the genetic potential to perform the detected lignocellulose trans­formation processes. Through their feeding ac­tivity, insects release enriched frass that is req­uired by their offspring to complete their dev­elopment. Depicted chemical compounds include (from left to right) glucose, pyruvate, lactate, acetate, xylose and benzoate. Frontispiece: source

The digestive system of animals can be wondrously complex. Think of our own, which consists of such diverse organs as the mouth, the esophagus, stomach, the small and large intestines, and the anus. Each one is responsible for a particular set of functions (which there is no need to enumerate here). Is such a division of labor also seen in "simpler" animals? This question was asked recently of wood-feeding beetles by a group of no less than 18 investigators from all over the US.

Indeed, these insects decompose their food, woody lignocellulose, along four different regions of their digestive track. As in an industrial assembly line, each anatomic region is charged with a different task. Depolymerization of the woody polymers takes place mainly in the midgut and the posterior hindgut. The resulting low-molecular-weight products are fermented in the anterior hindgut (which is behind the midgut). This is the place where nitrogen fixation, methane production, and acetogenesis also occur. Contrast this with the vertebrate ruminants, where most of the comparable activities take palace in a single organ, the rumen.

In these beetles, the anatomy of each region favors a distinct kind of biochemistry. Thus, the midgut has a relatively thin wall and thus a relatively high oxygen concentration, favoring depolymerization reactions. By contrast, the anterior hind gut has a thick wall that reduces the diffusion of oxygen, which facilitates fermentation, nitrogen fixation, and acetogenesis.

As can be expected, the microbial communities of each compartment are different and reflect the activities at the site. The authors sequenced 16 metagenomic libraries and carried out a detailed proteomic and metabolomic analyses of the insects. Of some 30,000 unique proteins, about 10% were shown to be relevant to the degradation of lignin, xylan, and cellulose, plus to fermentation, nitrogen fixation, and acetate production. Further study of these proteins allowed the reconstructing of genomes using shotgun metagenomics, which led to the identification of many of the relevant microbial species. These include a number of species such as Turicibacter and Novosphingobium that I had never heard of.

This work is among the first to offer a comprehensive understanding of insect digestive physiology. It allowed the authors to present in detail the distribution of microbial metabolic pathways throughout the beetle gut. Obviously, anatomy and physiology with more than a sprinkling of microbiology all matter!