A Shuttle Service for Phosphate

It's amazing, again and again, to see electron microscopic images of orderly chains of electron-dense, membrane-enclosed magnetite crystals within bacterial cells that turn their carriers into tiny compass needles. So, it's no surprise that here at STC, Elio, Gemma, and Daniel had been at­tracted by magnetotactic bacteria (MTB) earlier. Now we teamed up with Vivienne Baillie Gerritsen from Protein Spotlight, the blog of the Swiss-Prot team at the Swiss Institute of Bioinformatics. And while Vivienne takes a closer look at one of the magnetosomal proteins, MamB, and maybe also at MamM, I will follow here Heide Schulz-Vogt et al. on their quest to find out what a Magneto­coccus sp. bacterium is using its navigation skills for. 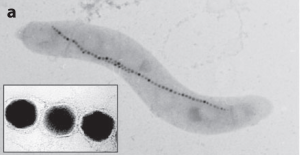 Figure 1. Electron micrograph of a Mag­netospi­ril­lum gryphiswaldense cell. The inset shows a mi­crograph of isolated magnetosomes enve­loped by the mag­netosome membrane (MM). Source

A brief recap of what is known about magnetotactic bac­teria. They come as motile, often spiralling rods like Mag­netospirillum gryphiswaldense (Figure 1), or as equally mo­tile, that is, flagellated cocci. They can propel them­sel­ves at high speed – up to 300 μm·s−1, which translates to a whopping 26 meters per day – through the interfa­ces of oxygen-rich (oxic) and oxygen-poor (anoxic) zones in the freshwater and marine water columns where they thrive. All contain "membrane-enclosed magnetite (Fe3O4) or greigite (Fe3S4) crystals" called magnetosomes, arran­ged as single or double chains along the cell's long axis in rods, or at the cell periphery in cocci (see Figure 3). (Take a brief journey through a bacterial cell adorned with such an internal chain of magnetosomes, a vi­deo made by the expert cryo-electron tomographists in Grant Jensen's lab.)

The phylogeny of magnetotactic bacteria is somewhat, well, ...murky as they are found distributed over several branches of the Alpha- and Deltaproteobacteria that also contain non-magnetotactic genera and species, and a few belong to the Gammaproteobacteria and Nitrospirae (see here). Le­fèvre & Bazylinski found indications for a (deep) monophyletic origin of the MTBs. Jogler & Schü­ler had proposed earlier, on the other hand, that horizontal gene transfer (HGT) was likely a major dri­ving force for the spread of "magnetotactism" among phylogenetically diverse bacteria. They based their proposal mainly on the finding that the set of ~30 homologous genes necessary for magnetosome formation in the MTBs is arranged much like pathogenicity islands, that is, as large coherent clusters perfectly suited for HGT (see here). It has in fact been shown that the Alphapro­teobacterium Rhodospirillum rubrum can be engineered to make magnetosomes when equipped with a minimal set of magnetosome-forming genes from its distant relative M. gryphiswaldense. Ei­ther way, "magnetotactism" as a trait may well be an intricate mix of vertical and horizontal trans­mission of magnetosome islands (MAI).

Magnetotactic bacteria align with Earth's magnetic field and, as said above, use their built-in com­pass to navigate between the oxic and anoxic zones of their habitat (almost) vertically, that is, at the shortest possible distances (see here). Since oxygen gradients – and, concomitantly, redox gra­dients – in water columns and the upper layers of lake sediments are often rather shallow and not necessarily stable over time, "knowing" where to navigate best can be challenging even for bacte­ria with exquisite chemosensory capabilities. However, more oxygen-rich water is invariably found "upstairs", the anoxic zone "downstairs". Thus, a compass may come in handy and be particularly useful for the fast runners that magnetotactic bacteria are. All the more so when they are busy transporting heavy loads, as you will see in a moment. 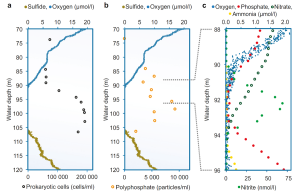 (Click to enlarge)
Figure 2. Bacteria containing polyP within the sub­oxic zone. a Abundance of prok­aryotic cells determined by flow cytometry after staining with SYBR Green I (black circles). b Abundance of micro­organisms with larger polyphosphate inclusions det­ermined by flow cytometry after stain­ing with tetracycline (orange circles). c Zoo­ming into the zone of phosphate uptake shows in high resolution the distribution of oxygen (small blue circles), phosphate (red circles), ni­tra­te (open black circles), ammonium (yellow circles) and nitrite (green circles). Phosphate is taken up at the same depth were oxygen con­cen­trations reach zero as indicated by a distinct nitrite peak. (dotted grey line added to adjust for the different scales in a+b, c.) Source

Heide Schulz-Vogt and coworkers studied a site in the Black Sea (43° 31.922' N, 32°30.909' E) where the "traffic" of compounds and microbes along a redox gradient ex­tends over several tens of meters in the open water col­umn, thus can be studied with much better resolution than is possible in lake and estuarine sediments, where gradients usually are only centi- or millimeters deep. The Black Sea is a >2,000 m deep and permanently sulfidic (an­oxic) basin, the world largest. It has a ~100 m thick layer of oxygenated water at the surface. There, saltwater inflow from the Mediterranean through the Bosporus and freshwater inflow from rivers result in a permanent, stable stratification.

Already in the 1980, a "phosphate anomaly" was detect­ed at 10–40 m between the lower limit of the oxic zone and the deeper sulfidic zone. This was confirmed in sub­sequent studies, so it's a steady state not much affected by temporal variations. Here, the phosphate concentra­tion profile displays a conspicuous minimum at the up­per and a maximum at the lower boundary (Figure 2). This is in contrast to other dissolved chemical species (NH4, SiO2) released by degradation of organic material, which increase gradually towards the bottom. In 1986, Gary Shaffer had proposed that phosphate forms co-precipitates with iron oxides at the upper boundary of the suboxic zone where dissolved iron gets into contact with oxygen and precipitates (phosphate ions are known to have an affinity for sorption to metal (hydr)oxides and often interact with iron oxides through Fe-O-P bonds). Such co-precipitates would drift downwards by gravity. At the lower boundary, phosphate would than then be released from the iron oxides in the presence of sulfides. But, as Shaffer calculated, such a "shuttle" could explain only ~40% of the observed phosphate transport. So, what else could be involved in moving all that phosphate "downstairs"?

The researchers had good reason to suspect that bacteria might be involved in shuttling phospha­te across the Black Sea's "phosphate anomaly". Brock and Schulz-Vogt had found earlier that the large, filament-forming Beggiatoa (Thiotrichales) do not only store sulfur (SO) and nitrate (NO3–) in their vacuoles but also phosphate in the form of polyphosphate (PolyP). In the lab, Beggiatoa cul­tures released phosphate, by decomposition of polyP, when sulfide concentrations and anoxia in­­crease. 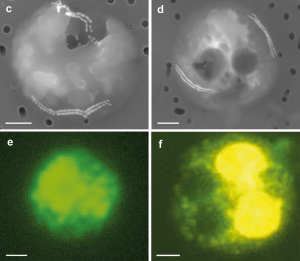 In their Black Sea samples, they obtained bacterial cell counts of ~105/ml for depths down to 90 m, increasing to ~2×105/ml down to a depth of 100 m, and again decreas­ing below 100 m (Figure 2a). The less fre­quent polyP par­ticles peaked at 95 m, in reasonable correlation with the higher cell counts at this depth (Figure 2b). 16S rRNA "typ­ing"of the bacteria sampled in the suboxic zone and transcript mapping for polyP-metabolizing enzymes iden­tified as the species likely involved in phosphate trans­port Sulfurimonas spp. (Epsilonproteobacteria), Com­pe­ti­bacter spp. (a poorly characterized gam­ma­pro­teo­bac­te­ri­al genus of uncertain taxonomic "affiliation"), Zeta­pro­teo­bac­te­ria, and Magnetococcaceae. Under the microscope, ~5% of all bacterial cells from these samples were sphe­ri­cal, ~5 µm in diameter, and contained in most cases two large DAPI-stainable polyP inclusions – in addition to the DAPI-stainable DNA, of course (Figure 3f). Electron mi­cro­graphs of these spherical cells revealed double strings of iron-rich crystals (Figure 3c+d), phosphorus-rich inclu­sions, and several hollow structures resembling vacuoles. And lastly, FISH "nailed" the large spherical cells as an un­classified lineage of the Magnetococcaceae (Figure 3e).

You may have noticed in Figure 2c that phosphate disappeared at the water depth where oxygen concentrations approached zero. In the same figure, you can also notice that a small peak of n­itri­te (NO2–) appears in the middle of the phosphate minimum zone, indicating the ultimate absence of oxygen and subsequent onset of nitrate (NO3–) reduction. Schulz-Vogt et al. suggest, therefore that in the zone of active phosphate uptake nitrate respiration is a dominant process. Accordingly, Magnetococcus marinus MC1 has been reported to contain genes for periplasmatic nitrate reduc­tion. The presence of large vacuoles led them to assume that their spherical magnetococci are able to store and transport redox partners (nitrate or nitrite) over large distances, as is known from benthic bacteria with vacuoles. The authors thus obtained clear evidence that their rather large magnetococci – cells of their closest known relative Magnetococcus marinus MC1 have a dia­meter of 1–2 µm – are involved in transporting phosphate across the "phosphate anomaly" in the Black Sea. However, a final proof would require carefully controlled experiments in the lab (these magnetococci aren't cultivable yet), or in situ spiking of the cells, a technically possible but prac­ti­cal­ly impossible requirement (research funds are limited).

One last question remained, though. Could the bacteria, and the Magnetococcus sp. identified by Schulz-Vogt et al. in particular, be responsible for filling the "60% gap" in the calculation of Shaffer for phosphate transport across the "phosphate anomaly" in the Black Sea (see above)? They had found Sulfurimonas spp. as one of the members of this community of bacteria in the "border zo­ne", and these bacteria are also known to have polyP inclusions and could be the most important transporters as they are present in much higher numbers than the magnetococci, and have, ac­cor­ding to the transcript analysis, high activities for polyP-metabolizing enzymes. The authors cal­culated: "Even under the assumption that 30% of all bacterial cells (~2×105/ml, Fig. 3a) were Sul­fu­ri­mo­nas cells with 66 amol P/cell, they would add up to only 4 nmol of particulate phosphate/liter, which is not even 10% of the total pool. Thus, in spite of their high abundance and activity, polyP storage and transport by Sufurimonas spp. cannot quantitatively explain the displacement of phosphate from the upper to the lower boundary of the suboxic zone." And they continue: "For a conservative estimate of the sto­rage capacity of large magnetotactic bacteria, we could assume two spherical polyP inclusions with a diameter of 2 μm per cell, which would result again in a more than a hundred times lar­ger sto­rage capacity (8 μm3) and likely a more than a hundred times larger P content(>6 fmol) per cell. Thus, in contrast to ordinary sized bacteria like Sulfurimonas spp., magnetotactic bacteria with a diameter of 5 μm could accumulate sufficient amounts of phosphorus to quantitatively explain phosphorus cycling in the suboxic zone." There you have it. Sometimes calculations help.