A Vertical Symbiont Keeps Its Chromosome Oriented Towards The Host

Have you ever heard of Candidatus 'Thiosymbion oneisti' (Oneisti for simplicity)? It is a rod-shaped bacterium that attaches, via one of its poles, to the cuticle of a marine nematode. Oneisti is com­mit­ted to have each daughter cell in constant and intimate contact with its host. To accomplish this, it cannot simply elongate along its long axis and then divide. Instead, it has evolved a remark­able new trait, it grows in width and divides longitudinally. Thus, the progeny of many generations of Oneisti cells are arranged tightly upright, like guards on duty, and form an unusual monolayer biofilm on much of the worm's surface (see them en garde here). Seven years ago, Niko Leisch and col­leagues described this peculiar mode of growth. They found that the division protein FtsZ is po­sitioned along the cell's long axis. At the time, Nanne Nanninga featured Oneisti as the "Bacterium That Learned Long Division" in these pages. The question remained, how are Oneisti's nucleoids arran­ged and segregated? Today, I will try to give some answers by sharing what we have learned since. 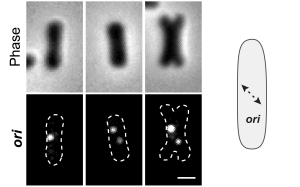 Figure 1. oriC localization pattern of Ca. 'T. on­ei­sti' as revealed by DNA FISH (left) and scheme in­dicating oriC migration. Rep­resentative cells show either one or two fluorescence oriC foci. Cells are sort­ed from the left to the right to in­creasing dia­meter. Scale bar is 1 µm. Source

All living organisms must segregate their chromosomes precisely. Oneisti's free-living relatives, for example E. co­li, replicate their chromosome by starting at the origin of replication (oriC) and finishing at the termi­nus (ter). The segregation of the oriC region follows the direction of growth, which is along the long axis. Before the daughter cells come apart, they end up with a chro­mo­some each. Once separated, sister cells propel and tumble freely if they are growing in liquid medium. It has been suggested that in E. coli the most important mecha­nism to segre­gate the two sister chromosomes depends on passive (entropic) forces, resulting solely from dyna­mic changes of the DNA condensation state. However, active (dedi­cated) mechanisms have been proposed for other bac­teria, such as Caulobacter crescentus and Vibrio cholerae.

Such segregation mechanisms have been studied for many free-living bacteria. In contrast, few studies have been carried out on the segregation and organization of the genetic material of bac­teria that are, like Onesisti, intimately and constantly associated with a host. We recently pub­lish­ed our findings on the chromosome segregation in Oneisti. Our starting point was the idea that the continuous attachment to the worm surface would require different strategies for DNA or­ga­nization and segregation.

Figure 2. ter localization pattern of Ca. 'T. oneisti' as revealed by DNA FISH (left) and scheme indi­cating ter migration. Repre­sentative cells show either one or two fluorescence ter foci. Cells are sorted from the left to the right to increasing dia­meter. Scale bar is 1 µm. Source

For starters, we set out to determine how many chro­mo­somes are usually present in a Oneisti cell. Conventional DNA stains did not allow us to accurately quantify the num­­ber of nucleoids. Therefore, we designed a fluores­cence in situ hybridization (FISH) probe targeting Onei­sti's oriC. As most of the cells showed either one or two oriC signals, we concluded that Oneisti is monoploid. This was supported by counting the fluorescence signals that we obtained when using an antibody against Oneisti's ParB, a centromere-binding protein. Next, we analyzed the position of the centromeres throughout Oneisti's cell cycle. We observed that after duplication at midcell, the centromeres migrate diagonally towards opposite cell halves.

In many bacteria, active movement of DNA through the bacterial cytoplasm involves the parABS system. ParB binds the DNA at a 16 base pair stretch called parS – in Oneisti located <3 kb from the replication origin, oriC – and directs the DNA movement by repeated interactions with the ATPase ParA. Because ParB binding is also near oriC in Oneisti, we conclude that the parABS sys­tem should also be involved in the diagonal DNA segregation. 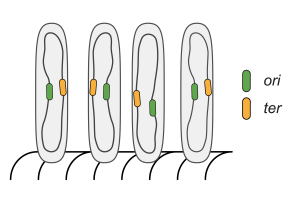 Lastly, to determine the orientation of Oneisti's chro­mo­some, we labelled a DNA locus within the ter region. We found that ter in non-dividing cells localizes at midcell and that sister ter sites migrate diagonally away from each other before cytokinesis begins. Once Oneisti's large longitudinal septum is built, the ter regions tether to the leading edges of the division plane. Finally, the separating septum pulls the sister ter regions towards one another, so that they end up in the cell center. That's why newborn cells always find their oriC and ter right next to each other at midcell, suggesting that a specific chromosome orientation towards the host is kept by Oneisti throughout the generations.

We hypothesize that it might be advantageous for Oneisti to position genetic loci near the pole attached to the host to facilitate interactions with the nematode and also to confine loci involved in environmental responses to the host-distal half of the cell. If this is indeed the case, then the longitudinal mode of cell division of the symbiont might have been selected for as a mechanism to accomplish this specific localization of the different chromosomal loci. One never ceases to be amazed at the many and diverse ways in which natural selection might have worked to evolve such eccentric molecular mechanisms. 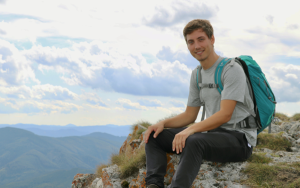 Philipp is a research associate and PhD student at the Envi­ron­men­tal Cell Biology group lead by Silvia Bulgheresi at the Uni­versity of Vienna where he completed a master's program in Mole­cular Bio­logy.