by Elio and Roberto

In 2013, an article  on the Gram* stain appeared in these pages. It celebrated the persistence of this procedure in microbiology, as well as its origins. In the early days of bacteriology, staining was a key technique, at first even more important than cultivation. It depended on being able to differentiate under the microscope between bacteria and tissue components. One way to do this relies on decolorizing the tissue by treating it with acid for "acid fast" bacteria, or with alcohol for the Gram stain. The inventor of this latter staining procedure, Gram, also found that treatment with an iodine solution made some bacteria (the Gram positives) more resistant to decolorization than others (the Gram negatives). The difference between the two depends on properties of their cell wall, which is thick in the Gram positives, thin in the Gram negatives. The split into two major groups of bacteria, though immensely useful, is not always perfect, as some bacteria that fall into one group per the Gram stain have clear attributes of the other (see the previous article). 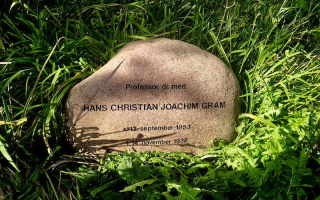 The ability to place bacteria via the Gram stain into one of two categories is of paramount importance for diagnosis in clinical medicine as well as for taxonomy in general. So, who was Gram? The inventor of the staining method that carries his name, Hans Christian Gram, was born in Copenhagen on September 13, 1853; no surprise the 166th anniversary of his birth was celebrated last week with a "Google Doodle," such was the importance of his contribution to the early advances of bacteriology. After attending medical school at the Univeristy of Copenhagen, Gram traveled extensively in Europe and settled In Berlin, in the laboratory of Carl Friedländer. Gram was a modest man, and in his initial publication one reads: "I have therefore published the method, although I am aware that as yet it is very defective and imperfect; but it is hoped that also in the hands of other investigators it will turn out to be useful." After his 1884 landmark invention of the staining procedure, Gram returned to the Universirty of Copenhagen in 1891 and held a professorship there until his retirement in 1923. He died in Copenhagen in 1938. With a little guidance from his great-granddaugher Lone Gram, an accomplished microbiologist herself, it is easy to stroll through the magnificient Assistens Kirkegård (Cemetery) and locate Gram's grave, marked by a simple engraved stone among lush greenery. A fitting remembrance of this modest yet most influential microbiologist.

(*As there has been some discussion recently regarding when and where to use uppercase or lower case G in spelling Gram, we note that here at STC we will always use uppercase when the word origin goes back to a person's surname. It's a small way to continue to "honor the heroes that made our life so much easier" to quote our friend and colleague Gilles van Wezel.)