In and About Copenhagen Not too many months ago Elio posted an engaging and very personal essay of his two years in Copenhagen. Those years spanned from 1956 to 1958, a mere 62 years ago, at a time when I was still in pre-school. While editing Elio's text, I was quite taken by his description of those days as "most likely the happiest of my life." I payed very close attention to Elio's words for a very personal reason. Like Elio in 1956, my wife Mechas and I were about to go and stay in Copenhagen for a while. But unlike Elio's, our stay would not involve two years but rather only three months. And we were not on post-doctoral fellowships, not at our age. Instead, we were fortunate to receive funding from the Otto Mønsteds Fond to carry out a Visiting Professorship at the Danish Technical University, hosted by my good friend and colleague Lone Gram, who currently directs the Center for Microbial Secondary Metabolites (CeMiSt) there.

It's uncanny how our overall experience in that remarkable city, despite its having been only three months, echoes Elio's description of life and science in Copenhagen. It's not that time has stood still there – quite the contrary – it's that the yndigt land (lovely country) sense that Denmark exudes seems only to have gotten stronger in the ensuing six decades. Carrying on with science as one's life in Denmark proved to make for three of the happiest months of our lives. And I intend to share with you several brief posts of our experiences there in the future. Now, I'll share a couple snippets of two very special moments that happened early during our stay.

One day, we rode off on our bikes to the University of Copenhagen, where I was to give a lecture to a large group of students and post-docs (Synapse) interested in the intersection of academic science and biotech companies. My destination was to be the brand new building of the "Biotech Research and Innovation Center." You can imagine my surprise and delight when the last instruction I got from Google Maps was "turn right onto Ole Maaløesvej." Elio: you'll be happy to know that Ole Maaløe's great scientific tradition is very much alive and doing very well in Copenhagen! 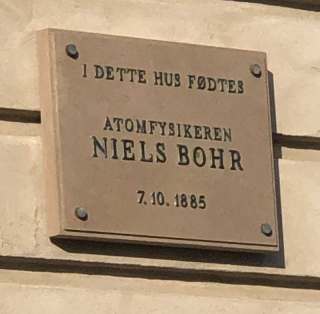 An evening just a couple days later we set out on a walk toward a wine bar (and these abound in the city today). When we arrived at our desired destination, we were a bit sad to find it closed on Sundays. We decided, without it giving much thought, to try instead the bar next door. Once again, I felt surprise and joy when I accidently glanced at a plaque on the building's wall. We were having a drink at Niels Bohr's birthplace! That prompted us to go home and watch the movie Copenhagen. If you have not seen it yet, please do. I think it should be required viewing for every scientist. I won't give too much of the movie away but I hope I'll whet you apetite for the watching it by stating the question that the drama addresses: "Why did Heisenberg go to Copenhagen?" There is much more about Niels Bohr that one can learn but here's a tidbit I did not know. Why did Max Delbrück – one of the founders of molecular biology – go from physics to biology? It is said that in 1930, soon after finishing his Ph.D., Delbrück visited Copenhagen and it was Niels Bohr who awoke Delbrück's interest in biology. So, somehow, one comes full circle in Copenhagen. Ole Maaløe was one of the original members of Delbrück's "phage group." Did Ole appreciate that Delbrück, who so influenced the direction of his scientific career, had himself been so greatly influenced by that fellow Dane, Niels Bohr? I bet Elio knows…