As an opportunistic pathogen, Pseudomonas aeruginosa lurks in wait of the perfect moment to make its move and become infectious in its host. Since it is so flexible in its choice of dwellings, P. aeruginosa is highly adaptive in its ability to couch surf among a wide range of hosts. But how does such an adaptation work and why is P. aeruginosa so good at it? 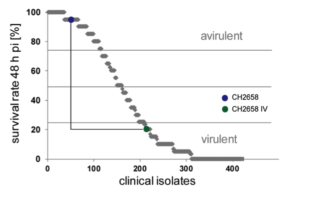 We typically think of adaptations as being a result of ran­dom mutations. However, if a bacterium is in imme­diate danger, it cannot wait for a mutation, let alone one that will ensure its survival. This is where a second mecha­nism comes in: phenotypic plasticity, defined as an in­dividual’s ability to change its phenotype when its envi­ronment changes. This process does not involve the permanent modification of genes and therefore is not inherited.

The discovery of a novel form of adaptation in P. aeru­gi­nosa that does not involve genetic changes yet persists through multiple generations was recently published (Kordes et al., 2019). The authors introduced this bac­terium into larvae of Galleria mellonella, a moth species previously used to test virulence of a variety of bacterial pathogens and a model system that bears striking similarities to innate human immunity. The authors injected 414 clinical bacterial isolates into the larvae. These strains varied in virulence, from 100% larval killing to 100% larval survival 48 hours post-infection. The authors found that a low virulence strain (CH2658) had the ability to evolve by increasing its virulence (ability to kill lar­vae) after continuous passage (Figure 1). The evolved strain, CH2658 IV, was stable for at least 4 days of cultivation; they were able to produce a few dozen generations.

The authors sequenced the DNA from the original (CH2658) and the evolved strain (CH2658 IV) and, surprisingly, found no differences. This rules out the possibility of a mutation being the cause of adaptation. Did a memory response of virulence become induced as each generation passed through the larvae? They hypothesised that the high levels of linolenic acid, a polyunsaturated fatty acid common in the larva’s fat body and a food source for bacteria, may serve as an environ­me­ntal cue for inducing the virulence phenotype. This could begin to explain how the adaptation persisted through generations without altering any genes. To investigate this, they passaged the low virulent CH2658 strain through a medium supplemented with 5% linolenic acid. They used paraffin to mimic the limited oxygen environment that bacteria experience inside the larvae. Pa­raffin controls ensured that differences in gene expression  were not a result of differences in oxygen levels in larvae. The authors obtained gene expression profiles for the highly virulent strain (CH2658 IV), the parent strain grown with only linolenic acid and paraffin (CH2658 Lil+P), and with only linolenic acid (no paraffin) (CH2658 Lil). They found large overlaps between the highly virulent strain (CH2658 IV) and the strains grown with only linolenic acid; the presence of paraffin making no significant difference (Figure 2). Interestingly, the shared genes are crucial for the increased virulence of CH2658 IV. These were expressed at similar levels in all groups, pointing to linolenic acid as the potential source of the increased virulence. These shared genes coded for the type III secretion system and glycerol metabolism, processes directly involved in bacterial de­fense mechanisms. Linolenic acid as a food-induced memory response is an interesting new idea, but the authors neglect the possibi­lity of epigenetics. DNA adenine methylation (G*ATC) was pre­vi­ously discovered to be an epigenetic signal that increases virulence in other human pathogens including Escherichia coli, Salmonella, and Vibrio (Casadesús and Low, 2006). Pseudomonas does not have the dam system of E. coli, Salmonella, and Vibrio, yet it is unclear as to why the authors didn’t consider a similar epigenetic mechanism at work in P. aeruginosa. Nevertheless, epigenetics is understudied in prokaryotes. And a correlation between the food source and increased adaptation is clearly evident in this study.

So, what we thought was a simple bacterial food source in insects is crucial in developing a memory involved in bacteria to amp up their virulence. It has nothing to do with altering genes, a concept we perhaps too easily accept as the default system. That being said, perhaps the use of a food source as an aid in a memory mechanism is specific to P. aeruginosa in insects and may stand alone, providing more reason for further research on the relationship be­tween food sources and induced memory responses. P. aeruginosa could give us insight into the couch surfing talents of bacteria and provide us with ways to kick these unwanted guests off our couches for good. 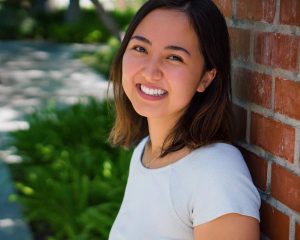 Jade Thurnham is a Senior Undergraduate Student in the Depart­ment of Biology, Class of 2020, at Occidental College, Los Angeles. Her research background traverses the line between marine biology and microbiology. Her current project saw her venture out to Pana­má to investigate how Caribbean sponges and their associated mi­crobial communities respond to elevated nutrients and shade. Out­side of research, she is a lover of spicy food, playing rugby, and awaiting the next ASM blog email alert.