by Alise Muok and Ariane Briegel

Try to imagine a creature that can survive from the heat of 150°C (300°F) to the cold of –270°C (–454 °F), in the absence of oxygen, after complete dehydration, at 1,000× atmospheric pressure, and after being exposed to the radiation and vacuum of space. Who might such space travelers be? Given their widespread news coverage, including a recent post by Elio, your first thought might be tardigrades. But there is a different type of creature that can also survive the extreme conditions of space. 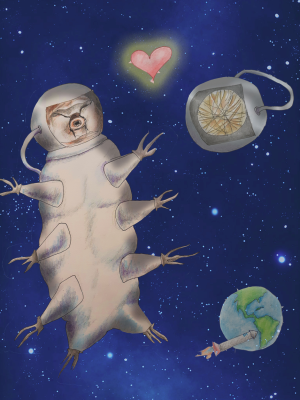 That's right, we are talking about bacterial spores! Like tardigrades, many bacteria respond to stress conditions by going into a dormant yet resilient state that can revert back into an active state when their surroundings be­come more favorable. While tardigrades undergo the­se transitions by regulating specific metabo­lic processes, bacteria produce spores that can germi­nate. These spores contain the iden­tical genetic information of their parent cell but they are coat­ed in a thick layer of peptidoglycan (PG) and proteins that protect them from the envi­ron­ment. When envi­ron­men­tal conditions are met, the spore PG coat will disassemble to produce an active bacterial cell once again. Because of their protective coat, the spores can survive in environments the parent cell could not, including the harsh conditions of space.

The rearrangement of PG layers during sporulation is a complex process that has been studied extensively in the bacterial model organism Bacillus subtilis by microscopy techniques, which allow researchers to directly view and image PG layers in vivo. Using these data, researchers have seen that sporulation occurs in four sta­ges. In the first and second stages, the mother cell replicates its genome and then asymmetric septa­tion of the cell occurs to separate the genomes into two diffe­rent compartments – the smaller of these will eventually become the spore. In the third stage the septum starts to curve around the forming spore (called the forespore) until it is completely en­gulfed inside the mother cell (see here in STC). In the final stage, the forespore becomes surroun­ded by thick layers of PG and then is released from the mother cell. However, several aspects of this system have remained poorly understood due to limitations of mi­croscopy techniques. In an exciting leap forward to understanding this process, new microscopy data presented in Khanna et al. (Open Access PDF) elucidate important features of PG synthesis and de­gra­dation during sporu­lation in B. subtilis. This advance was made possible by the use of a technique called cryo-electron microscopy (cryo-EM) that allowed these researchers to image sporulating cells at the highest re­solution reported thus far. 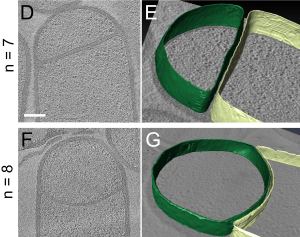 Before the invention of electron microscopes, scientists were able to see living things with light microscopes, but could not see inside cells at a molecular resolution due to the limiting wave­length of visible light. However, the wa­ve­length of an electron is about 100,000× shorter than that of visible light, revealing structural details at an un­pre­cedented level. To visualize the power of an electron microscope in your mind's eye, imagine that we got so frustrated with wri­ting this article that we asked our friends at NASA to shoot it to the surface of the moon (next to the dormant water bear colony located in the 'sea of serenity', 32.595°N, 19.349°E). An electron mi­croscope has enough magnifying power that we would still be able to read the article from here.

While electrons have a short wavelength that makes them ideal for high-resolution imaging, the electrons can only be used for imaging if the sample is contained in a vacuum, thus preventing the use of any sample that con­tains water – which basically means anything biological. In the past, this issue was circumvented by the development of elaborate sample preparation workflows that typically included sample de­hydration, heavy metal staining, plastic embedding, and sectioning. This allowed imaging of a wide variety of biological speci­mens and allowed researchers to gain great insight into cellular biology. However, the in­vasive nature of the preparation procedures affects the delicate ultra­struc­ture of cells and prevents more detailed in­sight into structures at the macromolecular level. But then cryo-EM came to the rescue! Instead of in­vasive preparation procedures, biological samples are simply plunged into a liquid cryogen. Freezing of the sample happens so fast that water molecules are unable to form crystals, and the specimens are embedded in a glass like, vitreous ice. Unlike crystalline ice, vitreous ice does not damage the sample in any way so the biological samples will retain native macromolecular structures. Furthermore, to study microbes in three dimensions by cryo-EM, we can simply tilt our specimens in the microscope while ta­king multiple images with dif­ferent orientations of the sample relative to the electron beam and then computationally back-project these images to generate a 3D image. This is similar to doing a CAT scan, but in this case we rotate the sample and not the microscope. This method is called cryo-electron to­mography (cryo-ET) and has emerged as a powerful tool to study the structure and function of macro­mo­le­cu­lar complexes inside of cells. 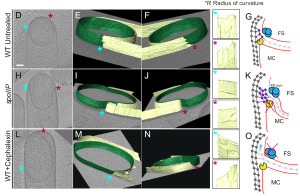 Before the Khanna et al. paper, research published by To­cheva et al. in 2013 also utilized cryo-ET to provide great insight into the process of sporulation in B. subtilis. They not only saw all the stages of sporulation in this organism but also deduced that a thin PG layer remains around the fore­spore during engulfment. It had been previously thought that the PG layer would completely disassemble to accommoda­te the bending force needed for engulf­ment. However, the resolution achieved in that study was not sufficient to un­ra­vel finer structural details. This li­mi­ta­tion resulted from the fact that spores and whole bac­te­rial cells are very large ob­jects for cryo-ET, which is ra­ther limited by the thickness of samples that can be ima­ged. Just like with light microscopy, if your sample is very thick, objects will just appear as dark silhouettes without any internal detail. Instead, the electrons must be able to penetrate through the sample to provide an image. In practice, samples of around half of a micrometer or less are suitable, while a thicker specimen is challenging or even impossible.

Spores are one to two micrometers in diameter, and sur­rounded in a dense PG coat… So how was the team of Khanna et al. able to uncover the finer details of spore for­mation in B. subtilis using cryo-ET? They were able to achieve this by using another new instrument in the cryo-EM toolbox called 'cryo-focused ion beam milling' (cryo-FIB). Es­sentially, this method lets you use an ion beam that is so precise that you can cut cells into layers that are thin enough for cryo-ET experiments. After vitrifying thicker samples such as whole B. subtilis cells undergoing spo­rulation, the sample is loaded in the cryo-FIB instru­ment. Here, a gallium ion beam is used to cut thin 'win­dows' into the otherwise too thick sample. The sample is then trans­ferred into a cryo-EM scope, where tomograms (using cryo-ET) of high quality can be collected at the positions of these 'win­dows'. So to put things more precisely, Khanna et al. didn't just use an electron microscope to elucidate sporulation at unparalleled detail, they first used cryo-FIB to make their samples thinner and then used cryo-ET to generate 3D models of these thin slices (Figures 2+3).

Using this workflow, Khanna et al. revealed the organization of PG around the forespore in greater de­tail. Specifically, they were able to see that the PG layer is continuously synthesized and degrad­ed at the leading edge of the mother cell during engulfment. This allows the septum to be 'push­ed' around the forespore and supply the force needed for engulfment. Furthermore, the resolu­tion of these data was so high that they were able to resolve tiny finger-like projections of the moth­er cell membrane at the leading edge that forms around the forespore. Their formation de­pends on an enzyme complex called DMP. It is formed by the proteins SpoIID, SpoIIM and SpoIIP, which together have PG degrading activity. This complex is tethering the membrane to the PG and degrading it ahead of the engulfing membrane. The authors further suggest a functional role of the fingerlike protrusions, which may pro­vide the membrane a tighter lateral grip during its move­ment by serving as a ratchet that prevents backward sliding.

Since the relatively recent introduction of cryo-EM, emerging methods have increasingly lead to as­tounding discoveries of complex biological processes. We can now see inside organisms that are lite­rally frozen in time in details we previously thought impossible. And for all this we need to thank the high-tech process that is cryo-EM imaging. Imagine, your samples are not just put under a lens to mag­nify your vision, but they are put inside a vacuum sealed column, at temperatures below –170°C, and then exposed to high amount of radiation from an electron source to generate an image that exposes the function of molecules. Thank you, cryo-EM! And since these conditions are very similar to those in space, it makes us wonder if water bears and bacterial spores could be 'revived' after imaging them in a cryo-EM scope. So the next time you see fan art of a water bear in space, imagine a bacterial spore friend in accompaniment! 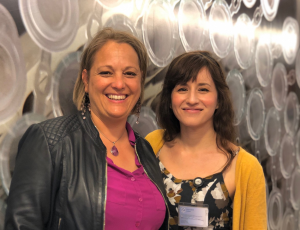 Ariane is a professor at Leiden University in the Netherlands. She has nearly 20 years of experience using cryo-electron microscopy to study the ultrastructure of microbes. Her lab focuses on investi­gat­ing how microbes sense and respond to their environment and explores the structures and functions of the molecular complexes involved in these behaviors. Alise is a postdoc in Ariane Briegel's lab at Leiden University. She has a background in structural bio­logy, specifically in analysing protein systems in bacteria. When they are not in lab, Alise loves to paint and practice aerial silks. Ariane loves gardening, hiking or learning how to do aerial silks from Alise!

Christoph Weigel on September 30, 2019 at 12:24 AM in Methodology, Physiology & Genetics, Teachers Corner | Permalink