« In and About Copenhagen | Main | How Do Tardigrades Withstand Drying? »

We learn with mother's milk (or at least in a beginning microbiology course) that certain bacteria, notably rickettsiae, chlamydiae, and anaplasmas, cannot grow outside of host cells. Thus, they are defined as being strictly intracellular parasites. Ha! A member of the rickettsiae has now been found to grow freely outside of host cells. This not only upsets the conventional taxonomic applecart but also opens our view to how these organisms may have evolved.

First, a word about the rickettsiae in general. They are highly diverse group of tiny bacteria that affect humans (that is, cause typhus fevers) and animals, and are both parasitic and mutualistic with nematodes and arthropods. In every case known to date, they are strictly intracellular organisms and cannot be cultivated on cell-free media. In fact, in the very old days, it wasn't clear if they were bacteria or viruses. Some 60 years ago, I helped clear that up while serving in the Army. In addition, rickettsiae are commonly (though not universally) thought to be related to the ancestors of mitochondria, which would place them center stage in eukaryotic cell biology. As an aside, a different group of bacteria previously also thought to be strict intracellular parasites, the coxiellae, turned out to be quite easy to cultivate in standard laboratory media once you know how. See Coxiella Escapes From Cell.

A group of Italian and Russian investigators found a new kind of rickettsiae, of all places, stuck on a sick looking paramecium from wastewater in Cyprus. In the parts of the paramecia that had lost their cilia, the investigators saw a dense extracellular layer of tightly packed bacteria, some 10 cells or more in thickness. Many of them seemed to be lined up parallel to each other, the edge of the lawyer of bacteria being fairly well delineated. That's some biofilm! The bacteria have a typical Gram-negative double membrane and a narrow pointed tip on the end in contact with the paramecium. 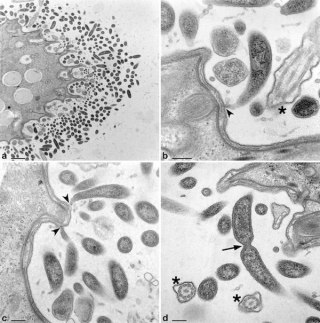 Figure 2. Transmission electron micro­scopy images of Deianiraea  on the surface of P. primaurelia CyL4-1. a Portion of Para­mecium cell surrounded by a huge num­ber of extracellular Deianiraea, form­ing multiple layers. b-d.  Deianiraea  at higher magnification. The bacterial side prox­imal to the paramecium progressively narrows, ending in a sharp and slightly curved api­cal tip in direct contact with the external side of the paramecium cell mem­brane (black arrowheads). In (d) a divid­ing Dei­aniraea cell, with the division sep­tum (black arrow). A few resid­ual para­mecium cilia are evidenced by black ast­er­isks. Scale bars: 1 μm (a) and 200 nm (b–d). Source.

So, who are these unusual rickettsiae? They belong to a newly named family the Deianiraeaceae (named after Deianira, Herakles' wife who unwittingly killed him with a poison-laden shirt, a somewhat far-fetched analogy) that includes only one species so far, Ca. D. vastatrix ("the destroyer," called D. vastatrix below). Its genome is a tiny 1.2 Mb, which it makes up in part by having a usually high coding ratio (92%) and only few mobile elements. Genomic analysis revealed genes for glycolysis, pyruvate dehydrogenase, the Krebs cycle, oxidative phosphorylation. This is common in other Rickettsiales. Typical of the group is also a ATP/ADP translocase, needed as these organisms are not likely to make their own di- and trinucleotides. Unlike others in the group, D. vastatrix has the potential to make 16 out of 20 amino acids. This greater biosynthetic repertoire may help explain their ability, unique, among the Rickettsiales, to grow and divide extracellularly. Within the Rickettsiales, the Deianiraeaceae belong to a phylogenetically divergent family that includes a few other, largely uncharacterized species (see here and here and here). The Deianiraeaceae seem to be found mostly in freshwater environments.

Some key nutrients are still required by Deianira, and are most likely derived, from the paramecia. This would make these rickettsiae obligate parasites, albeit extracellular. To say the least, the definition of rickettsiae need to be expanded. The question then arises, did these organisms start out as intracellular or extracellular organisms? The authors discuss both possibilities in some detail but resolve that a conclusion may be premature. Who am I to argue?