A Whiff of Taxonomy – Zymomonas

Zymomonas is a Gram-negative alphaproteobacterial genus with a single known species, Zymomonas mobilis that promise much but do not quite deliver, at least not yet. It is a facultative anaerobe. Notable is that it carries out ethanol fermentation at a level 2.5× greater than yeast. Part of the reason for this remarkable skill is that Z. mobilis is considerably more resistant to ethanol (up to 16% v/v) than yeast. However (and a big 'however' it is), it has limited industrial use for several reasons: It can only use simple sugars, such as glucose, fructose, and sucrose, and not the commercially cheaper ones derived from lignocellulose, such as xylose and arabinose. In addition, Z. mobilis is highly sensitive to plentiful inhibitors such as acetic acid and phenols. Not surprisingly, extensive attempts have been made to bioengineer strains without these drawbacks (see, for example, here and here). This seems to be an ongoing endeavor whose end is not yet in sight. 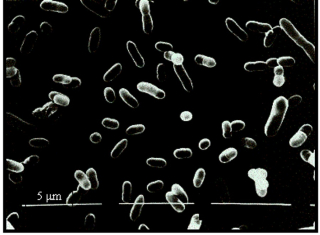 More about Zymomonas. It was first found in certain alcoholic beverages such as pulque (in Mexico) and palm wines (in Africa). Furthermore, it can spoil beers and ciders. It makes ethanol by a different pathway (Entner-Doudoroff) than yeast (Embden-Meyerhof-Parnas), producing half the ATP and thus resulting in a greater ethanol yield. Being a facultative anaerobe, it does not require expensive aeration in its fermentation. It gets even better. Zymomonas is capable of fixing nitrogen, thus bypassing the expense of having to provide a nitrogen source to its fermentations.

One more Zymomonas distinctiveness is that its membrane contain hopanoids, those steroid-like molecules that may otherwise be the most abundant natural products on earth and among the most durable ones (they are found in 3.7 billion-year-old shales. See a piece here by Paula Welander). Zymomonas is a champion hopanoid maker, suggesting that these lipids protect it from ethanol toxicity, a fact established by genetic experiments.

The authors of one review conclude: "Z. mobilis can serve as a model for biofuel and biochemical production and the knowledge gained from model strain studies can be extended towards the development of additional biocatalysts." A bacterium well worth knowing.