With the reported rise in antibiotic-resistant pathogens, it remains important to study the basic biology of these organisms to uncover what makes them so durable. Why do they survive so well in certain environments, and how might we effectively interfere with that? 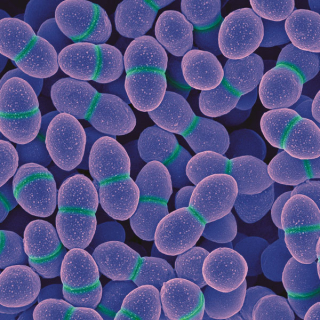 The Gram-positive bacterium Enterococcus faecalis  normally lives in the human intestine. However, it can also cause opportunistic disease elsewhere; it represents the third most frequent agent of hospital acquired infections. E. faecalis can cause relatively minor problems in humans, like urinary tract infections, or more serious conditions such as endocarditis or sepsis. Unfortunately, the species adapts very quickly to changes it might face within the host, and it has evolved multidrug resistance, including to β–lactam antibiotics and vancomycin.

Last year, an interesting paper described a characteristic of E. faecalis pathogenesis that may hold promise for new antimicrobial development. Like all life forms, E. faecalis requires manganese (Mn) as a micronutrient to survive. Mn is a co-factor of enzymes of central metabolic pathways, such as DNA biosynthesis and energy generation. But manganese also holds particular importance for many bacteria during pathogenesis, such as by playing an imperative role during responses to oxidative stress. During these pathogenic interactions, host and bacterial cells compete for available pools of essential micronutrients like Mn.

In their paper, Colomer-Winter et al. looked at predicted Mn transporters in the E. faecalis genome to determine their role in Mn homeostasis and their importance for bacterial virulence, processes not previously explored for this species. The core genome of E. faecalis encodes three putative Mn transporters: the ABC transporter EfaCBA and two Natural-Resistance-Associated-Macrophage Proteins (Nramp-type transporters), named MntH1 and MntH2.

The authors made mutants in which one of the transporters (three strains with single mutations: Δefa, ΔmntH1, or ΔmntH2), two of the three (ΔefaΔmntH1, ΔefaΔmntH2, or ΔmntH1ΔmntH2), or all three (ΔefaΔmntH1ΔmntH2) were deleted from the parental OG1RF E. faecalis strain. In this way, they could elucidate the contribution of each potential transporter and reveal unique or redundant roles they might play in the bacterium's growth.

Figure 2. Growth of OG1RF and its der­ivatives in Mn-replete (left) and Mn-depleted (right) conditions. Growth was moni­tored using a Bioscreen growth reader monitor. Significant differences were shown in the growth of the triple mutant, and one of the double mutants, between Mn concentrations. Source

Cultures of the mutant strains and the wild-type parent were grown in broth cultures supplemented with or depleted of Mn. Upon Mn depletion (Mn < 90 nM), one double mutant (ΔefaΔmntH2) had a slightly lower overall growth rate, and an extended lag phase compared to the parental control. The triple mutant, however, showed a significant decrease in overall growth. The authors confidently concluded that these three transporters have a redundant role in promoting E. faecalis growth in Mn-restricted environments.

The authors also determined the cytoplasmic Mn concentrations in the different mutants. Overall, their results were consistent with the prior observations: the single deletion mutants did not differ from the wild-type strain in their cytoplasmic Mn concentration. Two of the double mutant strains showed a slight (~40%) reduction in intracellular Mn, but in the triple mutant the Mn concentration levels were below the detectable limit. This supports a model where EfaCBA, MntH1, and MntH2 serve together as the three transporters involved in E. faecalis acquisition of Mn

The Importance of Mn for E. faecalis Virulence

Having established these three transporters were responsible for Mn uptake into E. faecalis, the authors investigated if Mn acquisition influenced the virulence of E. faecalis. To do this, they injected the parental OG1RF strain or the transporter deletion mutants into an insect larva model host, Galleria mellonella. 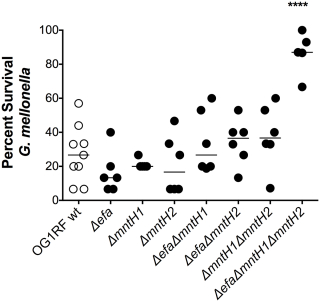 They found that as long as the infective strain of E. faecalis had at least one functioning Mn transporter, it was capable of killing G. mellonella. However, the triple deletion strain that cannot maintain intracellular manganese and suffers growth defects, showed a significant decrease in killing. The  double mutants had a small, though significant, increase in survivorship.

Even with a full repertoire of functional Mn transporters, a bacterium like E. faecalis can still face Mn depletion during pathogenesis. This is due to the effects of host nutritional immunity, a component of innate immunity whereby the host helps protect itself by sequestering essential elements from invading species. Calprotectin is a protein in the blood and tissues of vertebrates that, when the body senses an infection by a bacterium, is used to bind to specific transition metals in the body, thereby limiting the essential micronutrient from a competitor’s use. 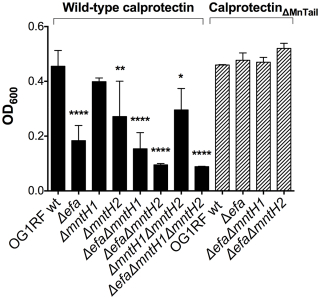 Figure 4. Growth of E. faecalis strains in the presence of calprotectin. Asterisks mark the degree of significant difference bet­ween the growth of a given strain compared to the control, with four ast­erisks indicating most significance. Source

The authors assessed the ability of their E. faecalis strains to grow when in the presence of calprotectin. As predicted, this protein inhibited growth of the single transporter deletion mutants, with the Δefa strain showing the greatest effect. As a control, the authors used a calprotectin variant whose ability to sequester Mn was specifically compromised but with no reduction in zinc sequestration. The E. faecalis transporter mutants showed high growth with this altered calprotectin, demonstrating that the observed calprotectin activity is specific to Mn sequestration. The authors thus concluded that EfaCBA is the primary transporter of Mn into the bacterial cell, and that transporter redundancy might have evolved as a way of overcoming host nutritional immunity effects.

What Does This Mean for Us?

The authors went on to test the virulence of their transporter mutant strains in a rabbit infection model, showing that without an abundant amount of Mn, E. faecalis is completely avirulent. Conversely, they found that high levels of Mn acquisition correlated with E. faecalis biofilm formation.

These results suggest that it may be possible to find or design a drug that could inhibit these specific transporters (EfaCBA, MntH1, and MntH2) to combat E. faecalis virulence. However, some side effects on the host may occur because each of these three transporters belong to highly and broadly conserved protein families, and vertebrates similarly require Mn for a variety of cellular pathways including lipid, protein, and carbohydrate metabolism.

Nonetheless, pursuit of novel antibiotics that inhibit micronutrient acquisition such as this are of ongoing interest. The authors of this study indicate interest in further studying "the significance of dietary Mn in the pathophysiology of E. faecalis, to elucidate the organ-dependent differential transcriptional regulation of each Mn transporter, and to understand the contribution of Mn-dependent responses to oxidative stress survival in the context of infection." At the very minimum, the knowledge obtained from this research has widened a path towards potential treatment of one of the most common hospital acquired infections in people. 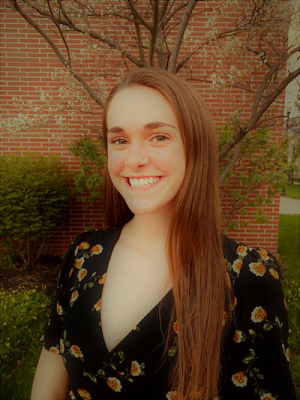 Madeline is currently a senior at Canisius College majoring in Biology with a minor in Spanish. She is preparing for medical school and is also a member of the women’s soccer team. Her interest in science, particularly as it relates to human health, developed while growing up in Vestal, New York and increased after becoming exposed to microbiology at Canisius!